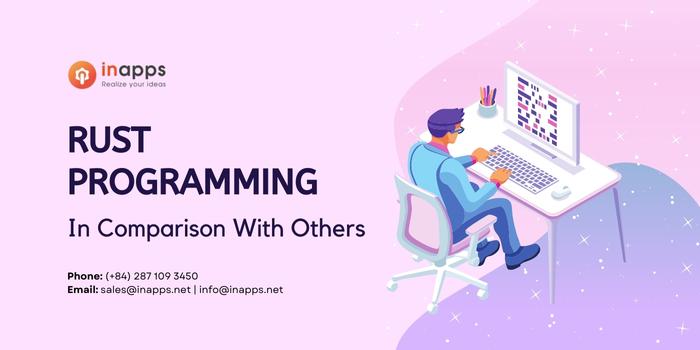 As you might know, Mozilla Foundation and Thunderbird email have been working on the open-source Rust programming language for a while now. Although, many developers are still anticipating Rust and waiting for the right time to start using this programming language. However, Rust hit 1.6 last November, it is now better than ever to start hacking on Rust!

Like any other language or tool, it’s important for developers/ coders to understand what problems Rust was introduced to solve, and what types of solutions best flow from it.

In the following article, we will break down Rust and compare it with other programming languages such as Node, C++, Ruby and Go.

While Rust is a general-purpose language, you could write your next web app in Rust, but you wouldn’t be best experiencing what it has to offer. Rust is a low-level language, best suited for systems, embedded, and other performance-critical code.

While it is conceivable that one day people will be writing the latest 3D video games in Rust — an area where high performance has historically been critical — it is unlikely ever to have a web framework that will go toe-to-toe with Ruby on Rails.

The biggest — and some would say most vital — difference between Rust and C++ is the emphasis on writing safe code.

With “safe code,” objects are managed by the programming language from beginning to end. The developer doesn’t do any pointer arithmetic or manage memory, as can be necessary for C or C++ programs.

For a given object the proper amount of memory is promised to be allocated — or, reserved — for the object. When accessing this object, it is impossible to accidentally access a memory location that is out of bounds.

And when its job is done, the object will automatically be deallocated by the system, by which I mean the programmer will not have to manually “free” or unreserve the memory used by that object.

With unmanaged code, not only is it harder to write code that is correct and bug-free, but leaves code far more vulnerable to security threats.

A particularly common threat is a buffer overflow, where a user can enter more information than can be contained within the program’s allotted memory space, allowing a malicious user to modify memory in parts of the system, not under the direct control of the code.

While dangerous, unsafe code can on occasion be very useful in achieving performance gains. Rust gives programmers the best of both worlds by allowing them to write unsafe code but default to safe code. In comparison, unsafe code is the default in C and C++; you must explicitly opt-in to unsafe code in Rust with the unsafe keyword. 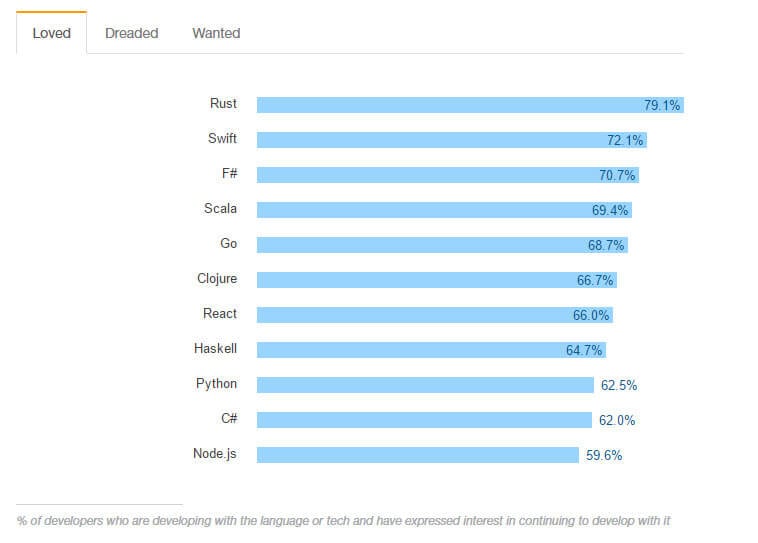 The Stack Overflow survey released last month found Rust to be the most beloved among developers of all programming languages and frameworks.

Go is another modern language that aims to allow programmers to write low-level code that is memory safe, and has the performance characteristics of a low-level language.

Additional goals of the Go programming language include powerful concurrency support through Go’s channels construct and simplicity.  But Go is a bit like Node.js, in asynchronous code is a first-class citizen of the language, and you can’t really ignore concurrency when writing Go code.

While Rust is also great at concurrent programming, it’s not the primary goal of the language. While Rust does not strive to be complex for the sake of complexity, the language does not focus on simplicity nearly as aggressively as Go does.

For example, Go frequently leaves out features considered essential by other languages, such as generic types, to keep in line with its goal of simplicity. Rust, on the other hand, is a fairly complex language and is far more similar to C++.

Read More:   Get Over Your Low-Code Prejudices to Pay Down Your Technical Debt – InApps 2022

Rust’s language goal is to enable fast, efficient, and memory-safe systems programming; simplicity has never been touted as one of its design fundamentals. Neither approach is fundamentally better, but they are quite different approaches to building a language. Due to this divergence, I imagine most programmers will have a strong preference for one language or the other.

A key characteristic of most modern programming languages is a strong package management tool. Ruby has gems and bundler, Python has pip ad PyPi, and Node has the much loved – although recently infamous NPM, and even Perl has the venerable CPAN. The C and C++ languages have never really had any standard  — or, arguably, even defacto standard — package management tools.

A language with a companion packaging system has some advantages over ones that don’t. For starters, most of these languages have large volumes of open-source libraries and frameworks from which to grab. If you are a Ruby/Rails developer, that ecosystem is so mature that there is a suitable gem for just about anything you could want to accomplish.

Libraries and frameworks not only allow developers to create faster by reusing the work of others but can often lead to better-tested, more battle-hardened code.

A JSON library downloaded by 10,000 users, with 3,000 closed issues, and over 100 unit tests typically far more robust than the average homegrown JSON library.

This can directly translate into more end users for your software and less “giving up” while trying to install it.

The Future and Current Projects

While Rust is still maturing, there is strong community support for it. Some current examples of rising community projects: redox, an operating system written in Rust; cgmath, a linear algebra, and computer graphics library; Iron, a concurrent web framework; and even a Doom renderer! If you are curious to give Rust a spin for yourself, why not check out The Rust Programming Language Book, or “The Book,” as it’s dotingly nicknamed by Rustaceans.

We’ve established the partnership with more than 60+ businesses from the US, the UK, Europe to Hongkong.

But more than being a partner, we aim to become the business’s companion. Therefore we continue to update helpful articles for those who are in need.

To find more similar helpful articles like this, visit our blog at: https://www.inapps.net/blogs/