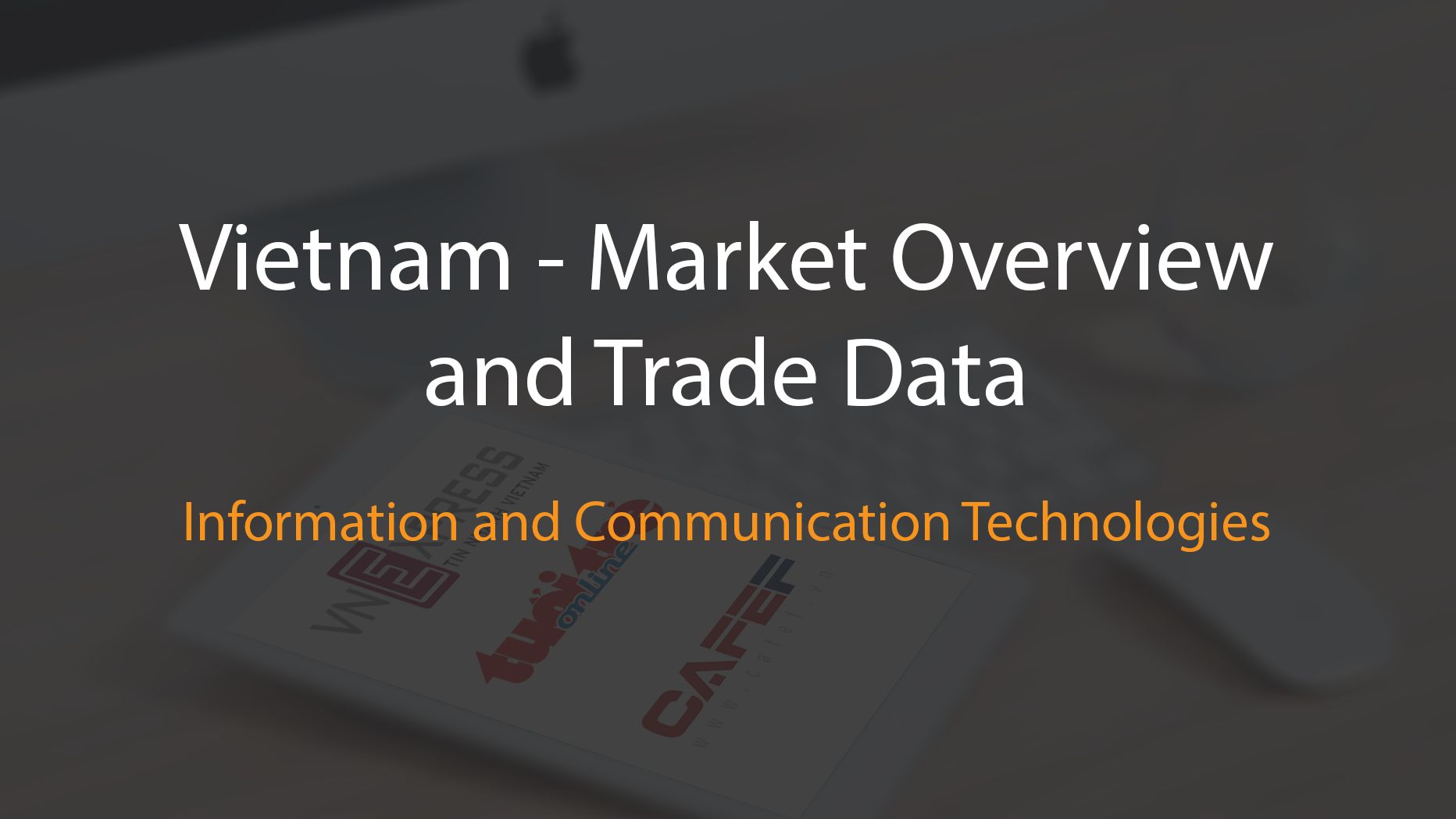 Coupled with Vietnam’s upward economic trend, the Vietnamese government and businesses are strategizing to upgrade the country’s information technology (IT) infrastructure. The strategy is aimed to increase total revenue of the IT sector as a percentage of Vietnam’s GDP. In April 2015, the Prime Minister issued Resolution #26/NQ-CP, instructing all Ministries and local governments to promote the application and development of IT to serve the purpose of successfully developing economy sustainably and integrating internationally.  In addition, as Vietnam has become a member of ASEAN’s Economic Community, enterprises are expected to increase spending to upgrade their IT infrastructure. The goal of the upgrades is to improve operational efficiency and expand the business.

A recent Economist Intelligence Unit report shows that demand in the ICT sector in 2016 was estimated to reach $11.8 billion and forecasted to grow to $13.1 billion in 2017. To meet this dynamic market growth, Vietnam imports the lion’s share of IT hardware and software as Vietnamese manufacturers are still relatively new and may not be able to offer the same range of solutions and services as foreign suppliers. This trend is expected to continue and offers good opportunities for U.S. suppliers.

Per the EIU, spending on IT will rise to $5.1 billion in 2017, an increase of 9.8 percent y-o-y. In 2016, spending on IT hardware continues to dominate the biggest share (86 percent) of the total spending, with software and services representing 6 percent and 8.3 percent of the market. Key players in the hardware market include suppliers from Taiwan, China, the U.S., and Japan. Major players in the software market include suppliers from the U.S., Germany, China, Russia, and Vietnam.

Telecommunications
Total telecom service revenue in 2017 is expected to reach $6.9 billion. Mobile data services own the major share (36.8 percent) of the sector. Viettel, Mobifone, and VNPT-Vinaphone continue to dominate Vietnam telecom market with over 90 percent shares. Viettel is the largest player currently and estimated to be at the same position through 2020. As of October 2016, the four operators had gained 4G licenses were Viettel, VNPT-Vinaphone, Mobiphone, and Gtel. In 2017, with strong investment, 4G services are estimated to rollout and expand rapidly.

Mobile Phone Networks
At present, there are six mobile operators in Vietnam; VNPT-Vinaphone, Mobiphone, Viettel, Vietnammobile, Gtel, SPT. Per Vietnam’s Ministry of Information and Communications, last year there were 128 million subscribers of mobile phones, of which 63 million were Viettel users, 34.6 million on Mobiphone, 20.5 million used VNPT-Vinaphone, 5.9 million on Gtel, and 3.6 million are subscribers to SPT and Vietnammobile.

Internet
As of January 2017, number of fixed broadband internet subscribers is 9.3 million, while the number of mobile broadband internet users via 3G network is nearly 44 million. Per Business Monitor International, the internet market in Vietnam is forecasted to grow at a rapid annual pace of 9 percent for the next few years due to the strong growth of applications, e-commerce, and internet TV.

From 2010 to 2015, urbanization in Vietnam increased 3.4 percent per year, and currently one in three Vietnamese people live in urban areas. The United Nations projects that half of the Vietnamese will live in cities by the year 2040, placing an increasing burden on municipalities. Vietnamese governments at both the central and city levels have institutionalized their strong support of smart city development in Vietnam to help improve services to the growing urban areas while reducing or maintaining costs.

The growing Internet and mobile phone penetration is helping to drive smart city development and e-government solutions. It is estimated that 52 percent of Vietnamese population use the internet. The country has 128 million mobile phone subscribers and of them, 16 percent are smart phone users. Significant financing support provided by international donors, such as the World Bank, is behind this growth area. As the Vietnamese government continues to encourage and facilitate public-private partnerships in urban infrastructure projects, more funding will likely become available for the development of smart cities in the larger cities in Vietnam.

Mobile Phones
Coupled with growing e-commerce and over-the-top applications, the rising income of the tech-savvy population in Vietnam is expected to drive the market for mobile phones at an estimated 12-13 percent from 2015 to 2018. The major suppliers of mobile phones in Vietnam include Apple, Samsung, Microsoft, Asus, Sony, HTC and Oppo.

Cyber Security Equipment and Software
After Vietnam Airlines’ computer system was hacked and the personal information of some 400,000 of its customers was published online in July 2016, and the international ransomware attack in May 2017, the Vietnamese government and its enterprises have increasingly paid attention to cyber security. U.S. suppliers of cyber security equipment and software are expected to see good market opportunities as virtually all mobile operators and internet service providers in Vietnam are increasingly making investments to protect and keep their customers.

The U.S. Commercial Service along with well-known U.S. information and communication technology (ICT) companies, have organized several smart city conferences in Vietnam. These companies are introducing smart city technologies and solutions to Vietnamese authorities and municipalities while at the same time educating them on the benefits of applying smart technology to planning and managing infrastructure and providing better public services.

U.S. suppliers will continue to find significant business opportunities in Vietnam between 2017 and 2020 as the government and businesses are modernizing their IT infrastructure. The following large-scale projects will present high-value opportunities for U.S. suppliers.