Aether is one of many new applications in the decentralized social media ecosystem. It’s like a peer-to-peer version of Reddit, with similar news aggregation and community discussion features. Interestingly, Aether is not only decentralizing the technical aspects of its product, but the user governance too. In other words, the users of Aether get to govern themselves rather than be subject to the whims of a corporate overlord like Reddit.

To understand what the goals of Aether are and how exactly it uses decentralized technology, I spoke to Aether co-founder Benedict Lau.

First things first, after speaking with Lau I learned that Aether is actually two separate applications — and only one of them is decentralized! This is not obvious from Aether’s homepage, which only promotes its newly released hosted (i.e. centralized) web application. More on that later in this article, but let’s begin by looking at the decentralized product, which is a peer-to-peer desktop application available on Linux, Windows or Mac.

The P2P app was first released back in 2018 and is billed as a “network of independent, self-moderated communities” (as described in the notes when you first launch the application). According to Lau, it has about 2,000 monthly active users. This app was created by Lau’s business partner, Burak Nehbit, who first started working on it around 2013. After the P2P app had been released, Nehbit brought Lau on as a contractor in 2019 to help develop the web app. Lau became a co-founder of the company this year.

What’s different about Aether’s P2P app compared to other decentralized social media services (such as the Scuttlebutt-based Manyverse, which I wrote about last week), is the “self-moderation” aspect. Lau described this to me as “subjective moderation,” which he said means “the user is prioritized.” In practice, this means the user is able to set filters and decide for themselves what content they want to allow — including who’s allowed to moderate it.

“I can look at the content that I want to,” he explained, “and I can subscribe to filters that other people, or some institution, applies. So I can protect my attention.”

Nehbit explained how this works in a blog post last year. He wrote that Aether “pulls the raw social network data from the P2P network” and then “compiles it locally, based on your choices” — including who “you’ve given consent to for moderating what you see.” If you don’t like what a certain moderator in a community is doing, you “just disable that mod” so you never see their actions again. 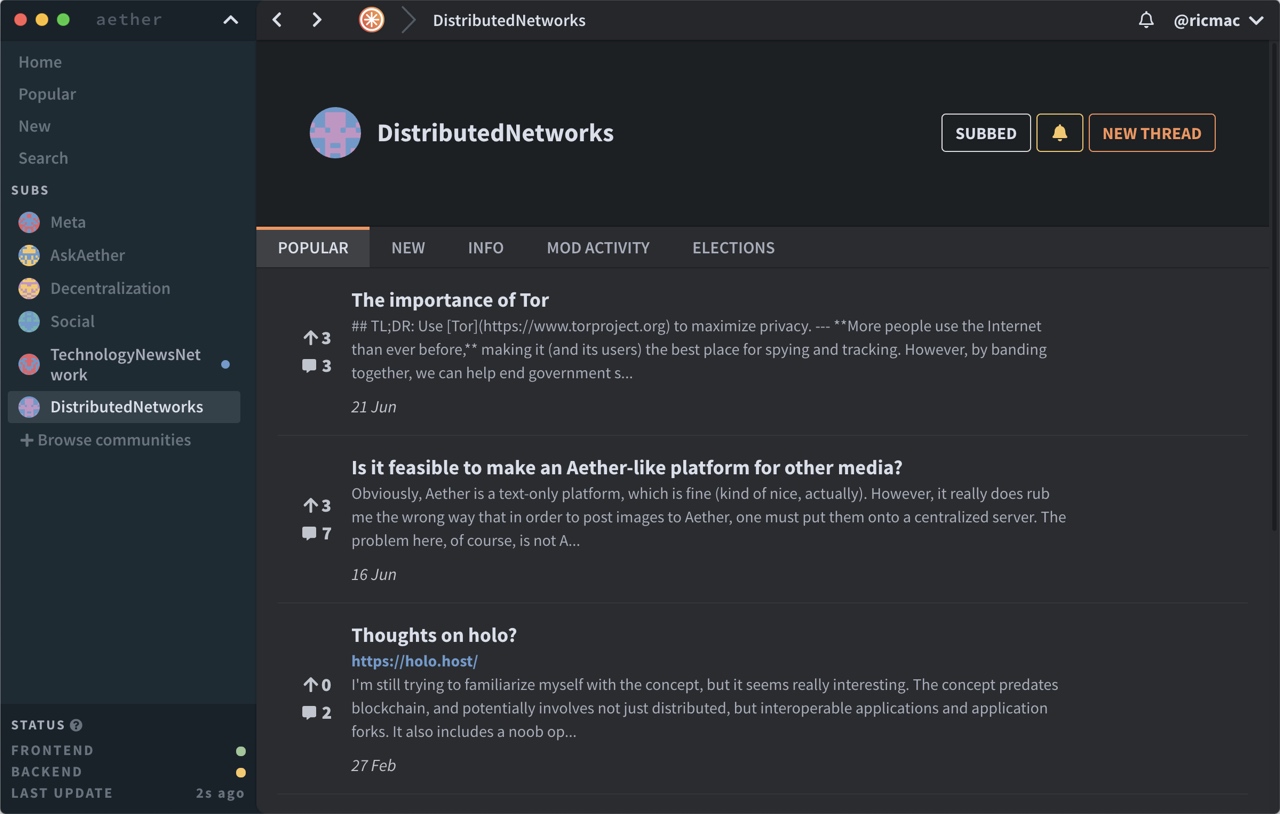 This approach also means that censorship is less of an issue in Aether’s P2P app. This is possible because of the nature of peer-to-peer networks, where the content is hosted on hundreds of different computers — not one central server. Or as Lau put it, “you may not have the freedom to post whatever content you want” on a service like Reddit.

I asked about illegal content and whether that is “censored” on either of the apps. Lau said that with the web app, “we legally have to handle it the same way Reddit does, because it’s infrastructure that we operate.” With the P2P app, they deploy different ways to manage illegal content.

“There are a few things to protect against spam and illegal content,” said Lau. “There’s something called a block list. So if someone posted some content that we are required by law to block, all the clients talk to this block list to purge that [content] and not broadcast it. So it goes away from the network.”

Effectively, then, content can be censored on the P2P app too. Lau admitted that some users are against the block list functionality, because they think it impinges on their free speech rights. But he noted that because the P2P app is open source, those people are free to fork the project if they don’t like the current setup.

Read More:   What Kind of Developer Are You, Anyway? – InApps Technology 2022

As with many alternative social networking services in 2021 — decentralized or otherwise — Aether is keen to protect its users’ privacy. The P2P app “strives to know as little identifying information about you as possible,” according to the notes on first launching it. Aether has also borrowed the concept of ephemeral content from Snapchat — content disappears from the P2P network “eventually.” Lau pointed out, though, that “the network forgets, but individuals can preserve,” by backing up the content on their own device.

As with Scuttlebutt, Aether P2P uses cryptographic technology to verify identity and content. When you first sign up for the app, you have to create a user key by “minting” a proof-of-work problem. A similar process takes place whenever you add or edit content.

“If I do an action here, if I upload [something], there’s a mint process,” said Lau. “It’s not a blockchain, because not everyone’s minting the same thing. But I have to solve a hard problem, in order to mint my action — otherwise, people will spam the network.”

This minting process impacts everything on the network. All nodes will only accept actions that are properly minted — including things like voting and moderation.

How the Web App Differs from the P2P App

Unlike the P2P app, the web app is a traditional server-client setup — similar to Reddit’s infrastructure. As well as the Reddit-like discussion features, the web app has a Slack-like chat feature. It is targeted at organizations or people who want to create their own private spaces — called “universes” in Aether’s lingo. So instead of joining a public community on the P2P app, you create your own private community and control who has access to it.

Another key difference is that the P2P app is open source software, whereas the web app is a hosted commercial service (again, like Reddit). “If you actually host infrastructure,” said Lau, “you can run a SaaS model that’s more traditional as a business — and this can hopefully also fund a lot of the R&D on the peer-to-peer side.” 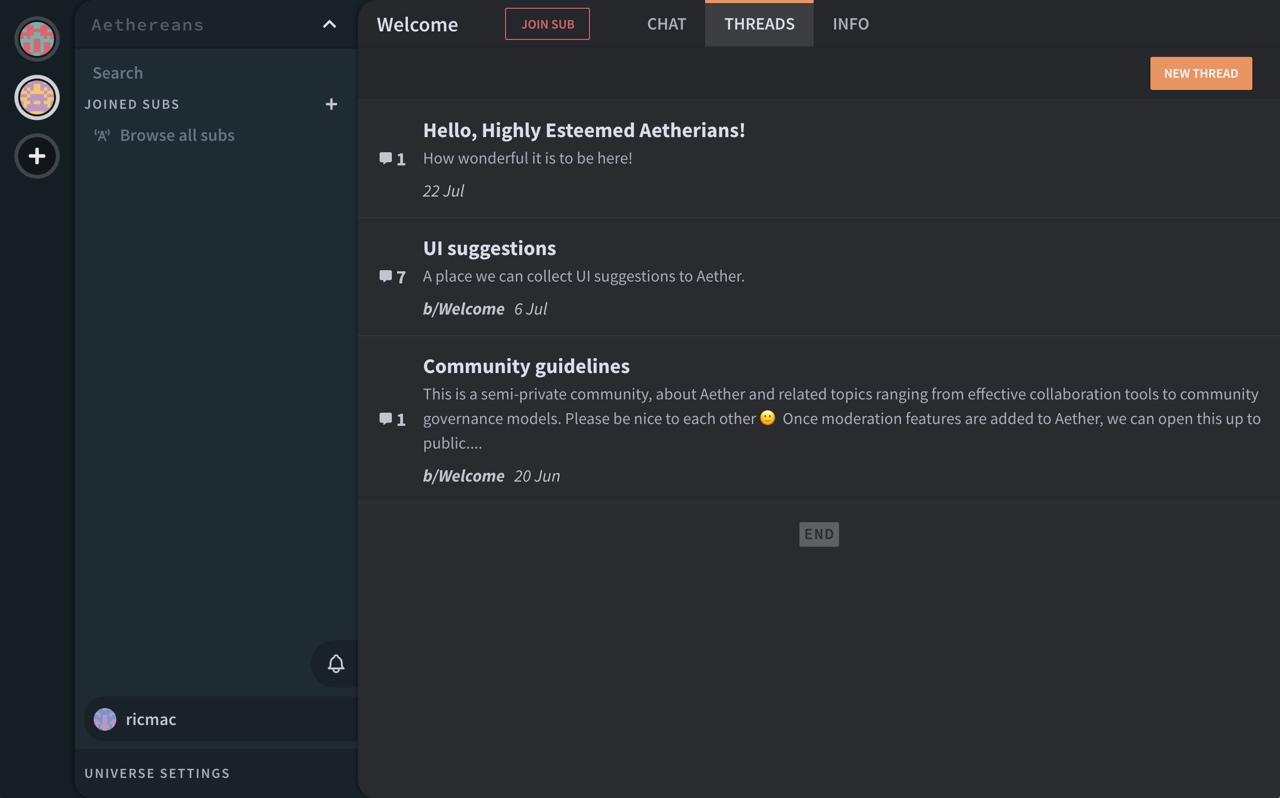 Lau told me that eventually, the roadmaps of the two apps will come together. However, the key problem they need to solve first is how to implement chat into the P2P app. Lau mentioned an open source project called Cabal, which describes itself as an “experimental p2p community chat platform.” According to the Cabal website, “everything is stored and runs locally.” So it is similar to how the Scuttlebutt protocol works — content is local-first, and then synced with the network when a connection is made.

Read More:   Previewing OSCON 2015, and Microservices as a Metaphor for the Broader Community – InApps Technology 2022

In the near future, Aether wants to merge universes (the private communities, currently only available in the web app) into the desktop app. This way, someone can start a universe with either a hosted or P2P backend.

“It really comes down to what audience you’re looking at, what use case you have,” said Lau. “If you are a work team, if you’re a brand, […] this hierarchical system of control [in the web app] is okay. But if you’re doing some open source project, [or] some sort of activist, political organizing — where you’re at risk of being censored — it’s probably better to back it with a peer-to-peer backend.”

As with any social network, Aether’s challenge will be getting to a scale where network effects kick in. At this point, with just 2,000 users on a P2P app that debuted in 2018, Aether has a long, long way to go. The Scuttlebutt apps I tested last week have the same problem.

Nevertheless, the self-moderation aspects of Aether are intriguing — especially given the black-box algorithms that control user feeds in Facebook, Twitter and other major social networks. I’m also interested to see if Aether can successfully merge its SaaS business with a P2P backend, which could turn out to be a compelling product for organizations that want to run a private social network that is also resistant to censorship (if not entirely immune to it).

As I noted last week, I don’t expect any decentralized social media projects to ever displace large mainstream — and centralized — products like Reddit or Facebook. But many of us are crying out for more user control and privacy in social media, and Aether is trying to fill those needs. For that reason, it’s worth keeping an eye on — and trying out for yourself, if you’re so inclined.