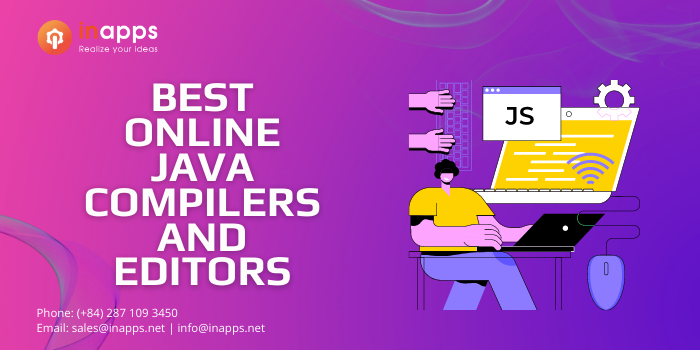 Do you plan to explore Java programming without first setting up your computer? If so, you’ve come to the correct spot. In this post, we’ll look at a variety of online Java tools like Java Compiler online that lets you modify, build, debug, and run java code, among other things.

An online java compiler’s functionality can range from a simple converter that converts .java files to .class files to a comprehensive cloud-based online java IDE that can be used to administer java projects.

Have a look at this Beginner’s Guide To Java if you are just getting started with Java or wish to revise your concepts to get a better understanding of the concepts.

How To Choose The Compiler That Suits Your Needs?

You may need to test a few before deciding on the one Java compiler Online that best suits your needs and style.

But first, let’s go through the basics.

JDoodle, Browxy.com, or Repl.it are fantastic alternatives if you just want to run a few code snippets. These tools have a clutter-free and easy-to-use UI.

On the opposite side of the scale are very complex and feature-rich development environments, such as Cloud9, which is presently owned by Amazon.com and is available as part of the AWS stack. Cloud9 and other online editors offer all of the strong capabilities that you’d find in an offline IDE like Eclipse.

Tools for performing online coding interviews are another type of online compiler that is quickly gaining popularity. Remoteinterview.io and CodeBunk are two prominent online solutions in this area.

Let’s take a glimpse at what each compiler has to offer.

Top Java Compilers In The Market

JDoodle features a simple and minimalistic user interface. You can modify java code in the browser, save it, execute it, debug it, share it with others, and much more.

It includes all of the essential Java libraries needed to learn programming fundamentals or execute code samples from textbooks, courses, and programs.

However, if you need to install any third-party libraries or frameworks, you may do so from the Maven public repository with a few clicks.

Repl.it is a web-based dynamic programming environment that supports a variety of languages, including Java. It comes with a Java code compiler, several ready-to-use examples, and a fully functional terminal emulator.

The tool has received increasing attention as the team has introduced additional features over the years. You may share your content with others and save the session on repl.it to continue working on it later.

Advanced features such as API integration are also available on Repl.it.

Repl.it APIs could be used to integrate compiler and editing capabilities into one’s own website, application, or tool for hackathons, interviews, or coding competitions.

Repl.it is also utilized by organizations such as Carnegie Mellon University, One Interview, Trinket, and Flatiron School, and is popular among instructors and interviewers.

Ideone.com is among the most useful free online Java compilers for experimenting with the language.

Syntax highlighting, source code downloads, and the possibility to render code public or private (accessible only by you) are just a few of the major features of Ideone.com.

While executing java code, you may also keep track of the time it takes to execute the code, memory use, and error messages, among other things.

It is one of the most advanced code compilers, and it uses a proprietary Sphere engine to handle many programming languages.

The Sphere engine is also accessible for commercial use, and it is widely used in coding competitions, hackathons, training institutes, and the education sector to teach coding and conduct coding interviews, among other things. The APIs supplied by the Sphere engine can be utilized in third-party applications.

Because this free web software was developed as a regular expression tester, the name Rextester is originated from Regular Expression Tester.

It has built a solid reputation as a Java 8 compiler over time and is quickly gaining popularity within the developer community. Many C# programmers use it since it implemented functionality for C# before supporting Java.

Restester makes remote user collaboration simple; you can initiate coding workshops, generate URLs, share with your collaborators, and write code together right away.

Restester has several restrictions, such as working with only one file named Rextester and the class not being a public class. In any case, why would a single class in a project that is only used once be made public?

This is yet another Java online compiler that is easy to use yet has a lot of features. Browxy, like JDoodle, is highly popular among students and allows you to get started right away.

You don’t need to register or sign in to execute snippets. You will need to join up if you wish to store code snippets for future use, exchange your code with others, or collaborate on the same code with your friends, instructors, or fellow learners. It is completely free to use.

Hey, while you are here, we wanted to know if you may also be interested in knowing about some cool software development tools! Here, we have compiled a list of Top Software Development Tools you can make use of.

As a programmer, you’ll always want a programming editor or Integrated Development Environment (IDE) that lets you write Java code or use frameworks and class libraries.

In today’s marketplace, there is a variety of Java IDEs and programming editors to choose from.

How Does IDE Work?

The IDE follows a basic working approach that helps developers to write logical code in the environment editor. Its compiler function displays a list of all the errors.

The debug functionality aids in the debugging of the entire code and the correction of mistakes.

Finally, it aids in the automation of various processes as well as the development of a new software program. It may also be used to facilitate Model-Driven Development.

Basic Use of an IDE

Advantages of an IDE

Disadvantages of an IDE

IntelliJ IDEA is a Java-based integrated development environment (IDE). JetBrains is the company that created IntelliJ IDEA. It comes in two flavors: a community edition licensed under the Apache 2 license and a proprietary commercial edition. Both versions can be used to build commercial products.

It makes recommendations for code completion, code analysis, and refactoring tools that are credible. It has mission-critical features such as a version control system and compatibility for a wide range of languages and frameworks.

It is able to monitor the developer’s context and automatically bring up the appropriate tools.

Eclipse is an open-source, fully-featured, and powerful Java integrated development environment (IDE) that is extensively used for Java application development.

Eclipse comes with a basic workspace and a plug-in framework that allows us to modify the environment. It is primarily written in Java.

It enables developers to modify solutions and make the application more robust because it is open-source.

It is built on the Java core foundation, making it extremely extendable, versatile, and interoperable with a wide range of languages, including C++, Groovy, Python, Perl, C#, and others. As a result, it is the developer’s first option.

NetBeans enables the creation of applications using a collection of modular software components known as modules. NetBeans is a Java application that works on Windows, Mac OS X, Linux, and Solaris.

The IDE has a solid architecture and built-in features that bring value to the whole SDLC, from project specifications to deployment. With a thriving user and development community all around the world, NetBeans is winning the hearts all over the world.

JDeveloper is known to be an open-source IDE that supports Java, XML, SQL, and PL/SQL programming, as well as HTML, JavaScript, BPEL, and PHP.

This Java IDE manages the whole development process, from design through coding, debugging, optimization, and profiling, and finally deployment.

It is created in such a manner that it can implement Oracle applications and platforms from beginning to end.

Since it comes with a multi-layer structure, it helps the programmer to boost their effectiveness by requiring less code. It has drag-and-drop editors, as well as visual and declarative editors.

It is known to be a programming environment for Android that is based on JetBrains’ IntelliJ IDEA software. Android Studio is compatible with Windows, Mac OS X, and Linux computers.

Because the term “Google” is associated with the brand “Google,” its dependability and excellence are not jeopardized. It comes with a slew of tools that make Android development a breeze.

The world is heading towards technology, and everyone wants to understand at least the fundamentals of programming, regardless of their field. Building up the whole system to execute a few snippets might be time-consuming and unnecessary for many people. As a result, online ready-to-use editors and compilers are quite beneficial. Particularly if you don’t come from a programming background.

In any event, the age-old idea of setting up servers or local workstations is no longer relevant, and online cloud-based development tools are becoming the norm. The online Java compilers and editors mentioned in this article are some of the best in the industry in their respective fields, and we really hope that one of them will be the right fit for you.

Want to read more such articles? Head straight to InApps Blogs and pick out the topic you want to read!