Read more about Can a 30-Year-Old Amiga Beat a Modern Mac at Chess? – InApps at Wikipedia

You can find content about Can a 30-Year-Old Amiga Beat a Modern Mac at Chess? – InApps from the Wikipedia website

What happens when a vintage computing enthusiast stages a chess-playing competition between a modern Mac and a 1980s-era Amiga Commodore computer?

The big showdown appeared on YouTube this month, offering a glimpse at what’s changed — and what hasn’t — as our technology hurtles into the future. And there was at least one big surprise, as YouTuber Christian Simpson staged four bouts (using six different chess-playing applications) for the 58,900 subscribers on his “Retro Recipes” YouTube channel. But mixed in with the competition and the nostalgia was a chance to look back over three decades of differences, considering changes in the way we view our software — and each other.

In a pleasant voice with a slightly British accent, Simpson tells his viewers that the Amiga-versus-Mac competition was partly inspired by that epochal moment in 1997 when IBM’s Deep Blue supercomputer beat the world’s human chess champion, Garry Kasparov. “Unfortunately, Garry was unavailable for my little rematch video,” Simpson quips. But what if he could pit a 1987 Amiga against a modern computer, say a MacBook?

Riffing on the advantages of modernity, he points out that today “Even a Tesla can play you at chess while you wait at the traffic lights.”

Assisting Simpson in the video is “Lady Fractic,” sitting in front of the MacBook, and together they enter the responses from one chess program as their own moves into the other program. “In theory, the Mac will slaughter the Amiga,” Simpson explained, “because it’s faster and its AI is smarter.”

To make it a fair fight, Simpson stages matches where the skill levels of both programs are set at comparable levels, using a long-standing chess metric called the ELO rating. First Simpson tries pitting the Mac’s stock chess app (ELO: over 1,600) against the AI behind the flashy 3D animations of Battle Chess on the Amiga (ELO: 1500; first released in 1988).

Simpson explains his expectations. “Logic would dictate that the Mac would still win, because it could get more thinking done in the same amount of time, even with the same ELO rating.”

But first, they encounter a very 2020 problem. The Mac chess app displays a pop-up warning that a 1.2GB download is required to enable its speech recognition features. “You may need to quit and open Chess again after download completes.” 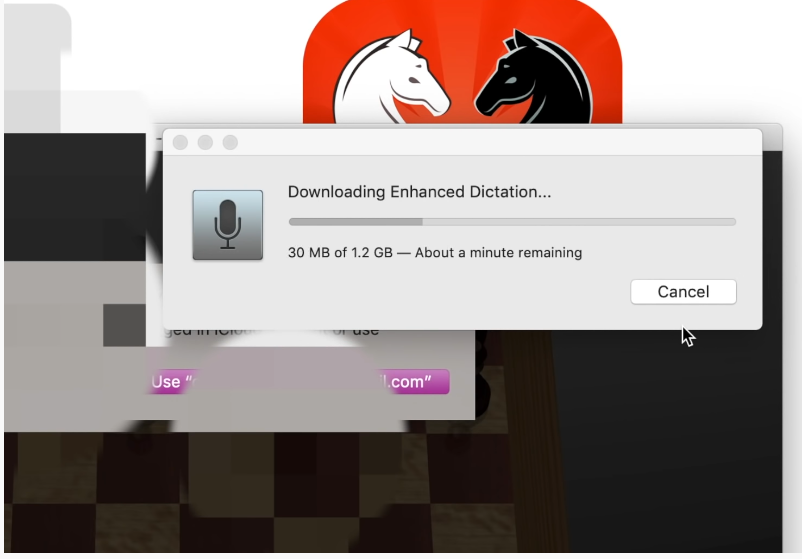 It was an optional update, Simpson later concedes in the comments, though “Still, there’s something nice about not being offered updates.”

He also reminds his YouTube audience about Wirth’s Law: that our bloating software is getting slower more rapidly than our hardware is getting faster.

But soon the bout has commenced, in a video displaying both chess boards. Back in the Mac chess app, Lady Fractic calls it “Much less violent.”

Back on the Amiga, there’s a wait for the next move. The chess-playing program being used, “Battle Chess” displays a giant icon of “The Thinker,” except it’s sitting on a computer. Watching the game unfold, Perifractic and Lady Fractic note that the knight chess piece appears an actual knight — but with no horse. Instead of jumping over pieces, he elbows his way through the other pieces as they move to let him pass through. But the two watchers gasp when that knight actually beheads the poor bishop. And how does a pawn beat a more powerful knight? “He hit him in the crotch!”

The retro fun continues. For castling, the rook turns into a kind of stone golem — clomping to its new square before reverting back into a rook. Soon they’re getting invested in the outcomes — and the triumphant animations of the “Battle Chess” queen. (“Did you see how fast she responded? She was like, ‘I’m going to murder you.”) But the lean vintage programming seems to be holding its own. “I thought the Mac would’ve slaughtered the Amiga by now,” Simpson says at one point, “but they’re actually having an involved, pretty good game of chess.”

Lady Fractic: “I’m seeing the end of the game coming…”

After 38 minutes of playtime, the Mac wins, leaving Simpson a little disappointed. “I think all we can do is move on to two different games, and see if with more intelligent games on both sides we get a better result.” 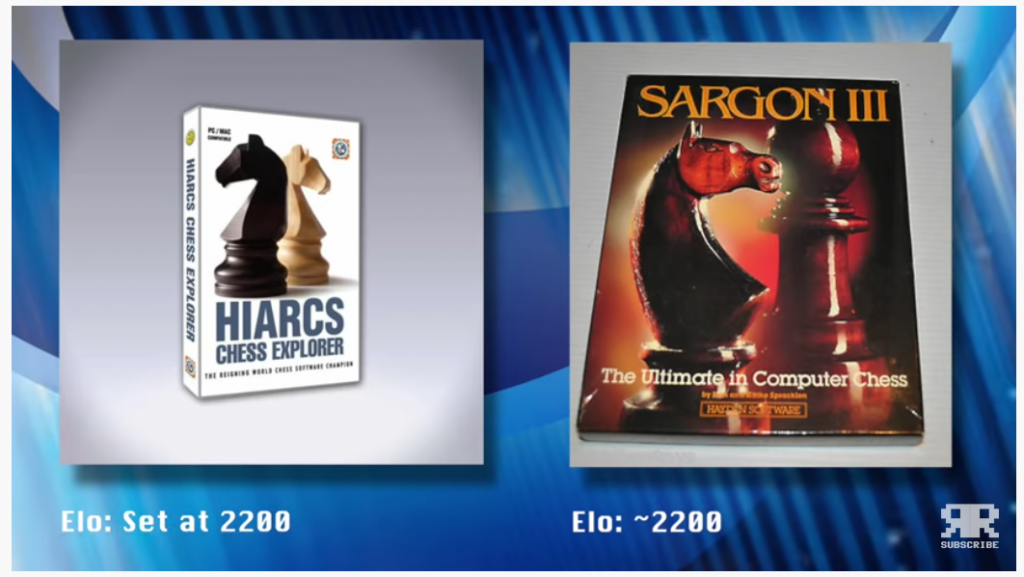 The Amiga Strikes Back

Midway through a duel between Real Chess 3D and the Chess Master 2000, Simpson acknowledges the graphics are “not quite so interesting.” 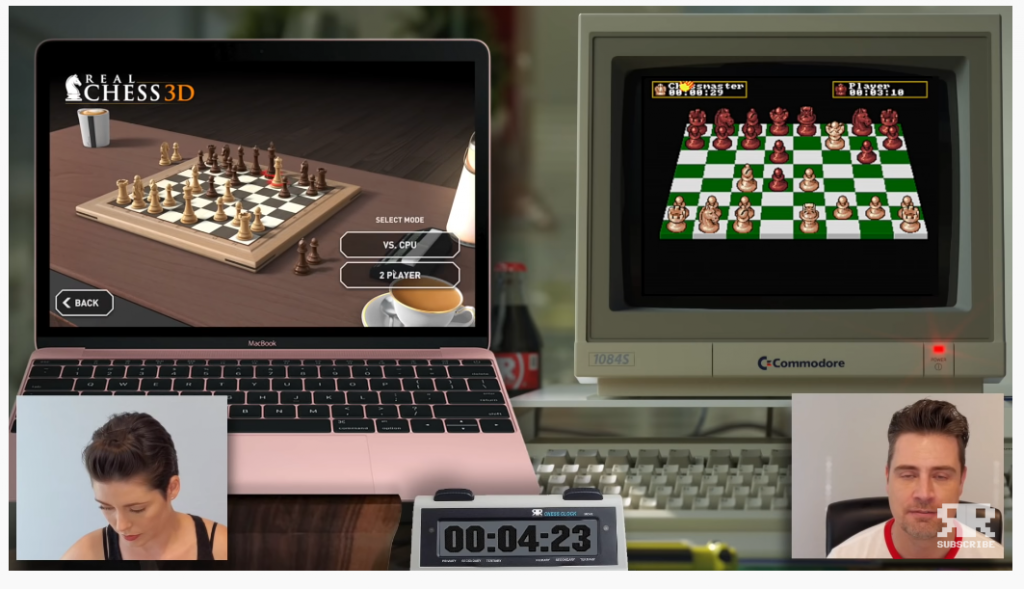 But within three minutes and 46 seconds, there’s a surprise.

The Amiga definitely has more personality. “Gotcha,” the “Chessmaster 2000” blurts out in its robotic voice as it takes a piece. And then, moments later… “You lose!”

The Amiga had pulled off a surprise victory — after just three minutes and 46 seconds. “We just answered the question, can an Amiga beat a modern Mac at chess?” Simpson tells his audience. “Yes.”

“I was not expecting that. Wow.” 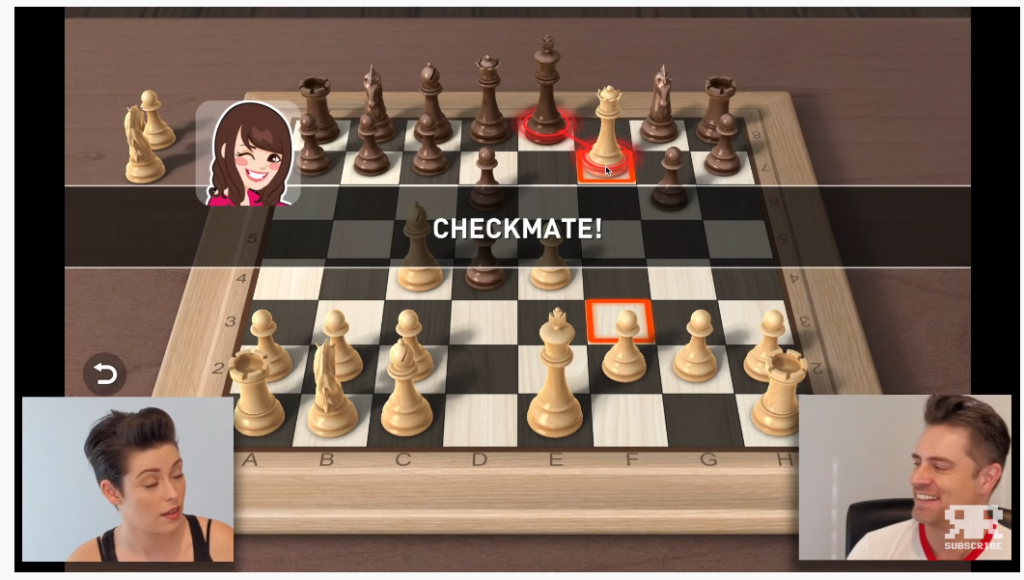 Then he bumped up the difficulty level — and the Amiga won again.

Everyone’s having fun, and they took some time to appreciate the creativity that went into making chess a video game. Simpson demonstrated “Chessmaster”‘s special menu option, “If the Boss Wanders By,” which replaces the chess game with a spreadsheet of industrious-looking numbers. (Its title? “Analysis of Real Estate Investment.”)

“But you have to be working for a real estate company if you use this,” he jokes.

By the end of the video, the MacBook had won its game against both of the Amiga’s other chess-playing programs — but not the two games it played against “Chess Master.”

“I can’t deny that I wanted the Amiga to win,” Simpson admits sheepishly. “But I suppose it would’ve been ridiculous if the Amiga had won this whole match.” 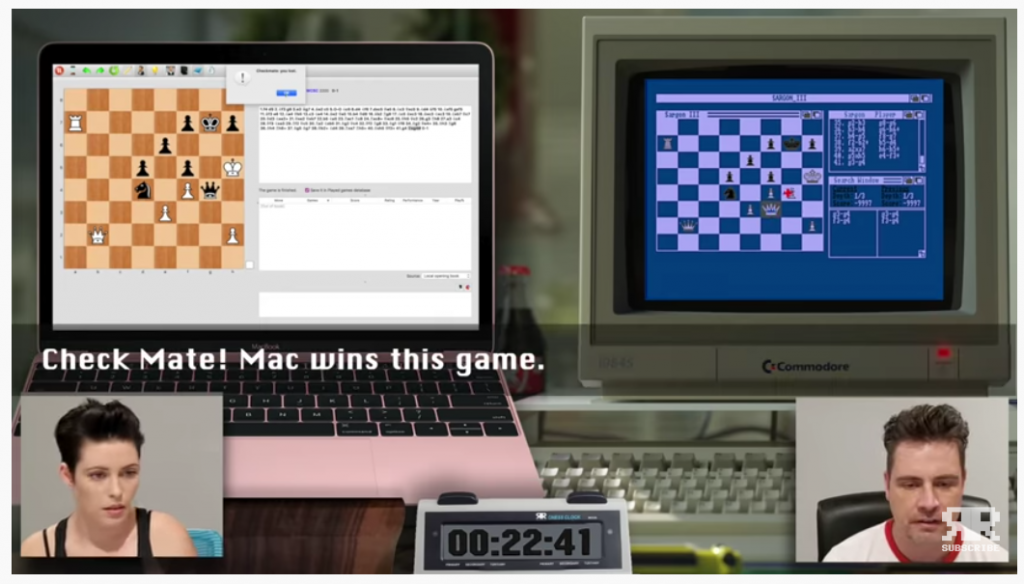 But he still salvaged the results by looking over the competition — counting all the games played by all the programs. “The final score is two games to the Amiga, two games to the Mac, which means it’s a draw.”

“But I’m amazed… If the Mac is 2000 times faster than the Amiga, the Amiga would’ve got a lot less thinking done. Pretty stunning that it managed to win two games out of four,” he said.

Simpson doesn’t think it’s Moore’s law, or software bloat, instead proposing a law of his own, Peri’s law, which states that “AI trained only with modern data or self-play can still be bamboozled by old data. A sort of AI tunnel vision,” he added.

And then we arrive at the most human moment of all: crafting our own thoughtful explanations for what we’ve just seen. “I guess what I mean is that what if the Amiga is kind of like the wise old man playing chess in the park, using dated techniques that the teenaged champion didn’t expect. Of course, that’s kind of a romanticized view. It may not be true at all.”

And in the comments, someone suggests a reasonable explanation for the surprise upset: that ELO scores have been changing over the years, and a 1,600 score from the year 1987 would today be the equivalent of a score of just 1,300-1,450.

“Older Chess programs ran on computers that had much tighter limits so the programs code had to be very lean & clean in order to be playable,” argued a YouTube viewer named “TheCaptain.” “Today’s code and coding methods are much less lean by comparison. Some are even down-right sloppy. I’m actually surprised the C64 didn’t win the match.

But it prompted more ruminations on the evolution of computers today — as well as our relationship to them. Someone even shared a 2019 interview with Garry Kasparov, in which the chess grandmaster who’d lost to IBM’s Deep Blue argues “We’re learning that it’s no longer human vs. machines, it’s about humans working with machines… many people feel uncomfortable that the territory that belongs to us is shrinking. I’m saying, ‘So what?’ you know?