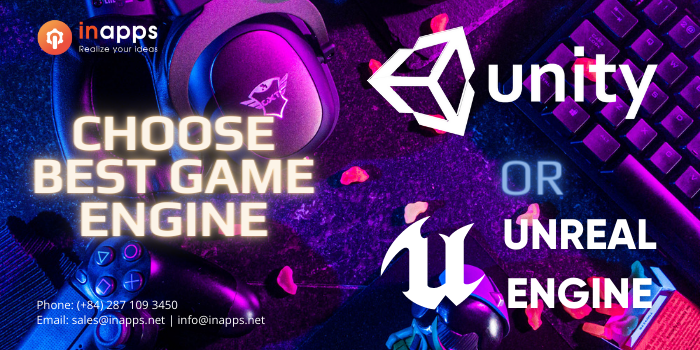 I believe that each one of us does get bored with our everyday schedule at some point in time and starts looking out for better recreational avenues to unwind. To remove this boredom, many people prefer playing video games. Games are a good source of entertainment and also teach us a lot about planning, strategy making, teamwork, and quick reflexes. You can also say that they teach us how to become a good strategist.

Due to the craze of games, many people start leaning towards learning game development. I mean, wouldn’t it be great if people played and enjoyed the game you created? There’s no joy next to that. So people start learning the programming languages and basics.

The main component for developing a game is the Game Engine. It combines all the elements like sound, graphics, artificial intelligence(AI), background, and many other components. The most common gaming engines used are Unity from Unity Technologies and Unreal from Epic Games.

The biggest confusion in game development is whether you should go for Unity or Unreal. So in this article, we are going to do a comparison between Unreal Engine Vs Unity to know more about them.

But before that, let us have a brief description of Game Engine-

A game engine, also known as a game architecture, game framework, or game frame, is a software development environment designed for people to build video games. Developers use game engines to construct games for consoles, mobile devices, and personal computers.

Now with the basics done, let us look at Unreal and Unity Engine.

Unity is a game engine developed by Unity Technologies. It is one of the most widely used engines in the game development industry. Since it is a cross-platform engine, it can be used to create games for different platforms like Windows, iOS, Linux, and Android.

The engine has been adopted by industries outside video gaming, such as film, automotive, architecture, engineering, and construction. As of now, the engine supports as many as 25 platforms. The latest version of the Unity at the moment is Unity 2019.2.

According to Wikipedia, The engine can be used to create three-dimensional, two-dimensional, virtual reality, and augmented reality games, as well as simulations and other experiences.

It has its own Integrated Development Environment(IDE) and is famous for creating interactive games. It contains many elements like Assets, GameObjects, Components, Scenes, and Prefab.

Unity has been used to develop many renowned games like-

Read More:   How to Create a Custom React-native Component from Native Java Component

Disadvantages of Unity are-

What Language is used by Unity?

Unity uses C# as the scripting language for both the Unity editor in the form of Plugins and games. Before C#, it used a language known as Boo which was removed with the release of Unity 5. It also uses a Javascript language known as Unity Script. Unity takes your C#/ JS/Boo code and compiles it to run on iOS, Android, PC, Mac, Xbox, PS3, Wii, or web plugin.

Depending on the platform that might end up being Objective C or something else, but that’s completely transparent to you. There’s really no benefit to knowing Objective C; you can’t program in it.

What is Unreal Engine?

Some of the famous games developed using the Unreal Engine are-

Disadvantages of Unreal are:

What Language is used by Unreal Engine?

For Unreal Engine, the scripting language used is C++. But when you’re building the actual game code, you would require a mixture of Blueprint(Epic’s own proprietary language) and C++. It has great blueprints that work like building blocks so even artists without any programming knowledge can use the engine to assemble and adjust basic things.

Now that we have discussed Unity and Unreal individually, let us see the comparison between them-

The full version of Unreal Engine 4 will be available for free if your game revenue is less than $3,000/quarter; if it is more than that, then 5 percent of your game’s gross revenue will be paid.

The Unity Gaming Engine has a free Personal Plan that is fully free and great enough to be used by individuals and small businesses. Unity provides two types of packages for larger organizations. The Plus package is available to companies with sales of less than $200K in the last 12 months prior to purchase. This bundle is available on a monthly/annual subscription if you choose. The monthly subscription to the Plus bundle is $35 a month and the annual subscription to Unity Plus is $299 on a prepaid basis.

Unity provides a Pro subscription to companies with sales greater than $200K in the last 12 months prior to purchase. The Pro subscription has few extra functionalities, such as source code access and priority customer care and support.

Besides that, there are different costs for iOS or Android game development. So, if you’re planning something massive, then developing with Unity 3D can be a great option. However, if you are working on a basic or experimental scheme, the Unreal Engine can be a saver.

Game engines are an important element in game development. We cannot imagine development without them. In these, we have two most preferred options- Unity and Unreal. Unity is renowned for its cross-development support and for making 2D and 3D simulations. Unreal is preferred for building large games (AAA title) because of its beautiful graphics. Both have their own set of advantages and drawbacks. Some may prefer Unity while some may prefer Unreal. You can check both for yourself and decide which one suits you!