If you browse tweets from ETHDenver, you might get the idea that it was a big party for people who HODL cryptocurrency while simultaneously demonstrating their early adopter street cred by wearing hoodies emblazoned with their pricey profile picture NFTs, all while chasing down Vitalik Buterin for selfie opps. All of this certainly took place over the weekend, though ETHDenver also had a series of conference sessions with the opportunity to learn more about the Ethereum ecosystem.

I found the session titled “Onboarding Web2 to Web3 via Data Unions” to be particularly interesting, both as a user who has my data monetized and as someone who recognizes the potential for developers who may be interested in packaging or accessing user data. The panel was hosted by Marlene Ronstedt, co-founder of Data Union DAO. The panelists for the session included:

Ronstedt kicked off the session on data unions saying, “we’re thinking that everyone has data, but not everyone has crypto and we think this is how we can get the next billion users into the space.” You can watch the full panel in the YouTube video below. My thoughts on what was presented follow.

What Is a Data Union?

One of the promises of a decentralized Web3 is the notion that as users we can all own our data. This is in contrast to Web 2.0, where the prevailing view is that we the users and our data are the product being exploited for financial gain by large centralized organizations. A data union is a scalable way to collect real-time data from individuals and package that data for sale, in a way that is mutually agreeable to both the data source and the packaging application. Much like workers joining a union in real life to rally around a common set of goals, data unions allow individuals to join these unions to aggregate data in a controlled way, complete with the ability to vote on how and where the data is used, through DAO (decentralized autonomous organization) governance.

For users, one challenge to the idea of controlling your data is finding an interested buyer. Few data consumers want to go through the hassle of acquiring data from one individual at a time. Data unions solve this by aggregating data from a set of users who opt-in. For developers, data unions have a cold start problem, where they need a critical mass of users to make the package of data interesting — both as something to sell and a data set to consume.

The onboarding of data in these unions is a decentralized application (dApp) where a user agrees via smart contract to include their data in the application’s marketplace. Data buyers acquire data from the marketplace and payments flow back to the data providers after the administration collects a fee. The end-to-end of the relationship is governed by a smart contract. The basic structure is visualized in the chart below. 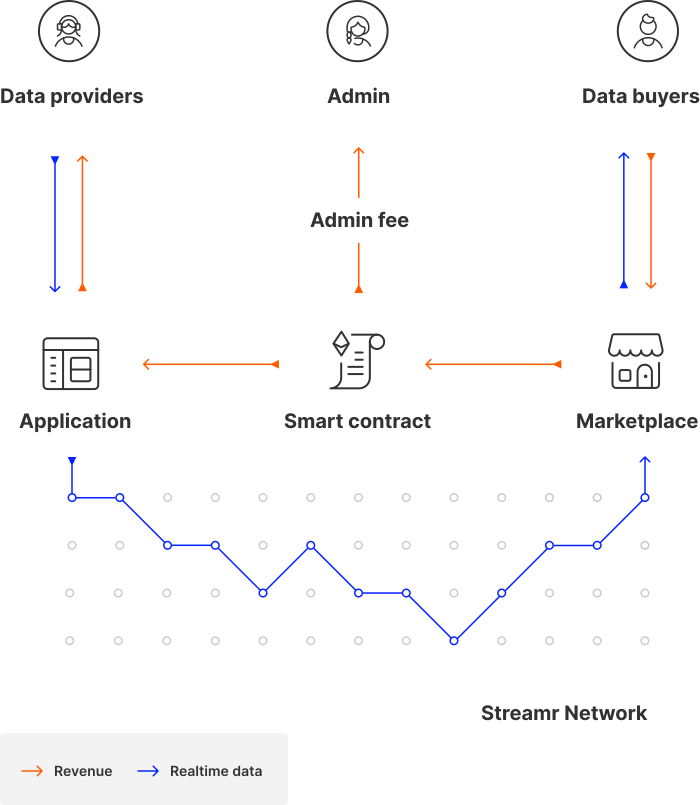 Use Cases for Data Unions

Streamr Network is a decentralized pub/sub network for transporting real-time data over WebRTC mesh networks. A data union is one of Streamr’s core products. It simplifies the process by making it easy for developers to deploy a smart contract on the Ethereum sidechain xDai. As a developer, you integrate the Streamr client in your dApp, which allows users to join your data union. The example deployments are all provided for use in JavaScript frameworks like Node.js.

One of the first examples of a data union is the browser extension Swash. With the extension installed, a user gives permission to have browsing data aggregated and sold to interested parties.

The panel contains a couple of additional interesting data unions. DIMO Network sells a hardware device that can be connected to ODB2 ports in cars, to share care data back to the network. Re-public is another example that allows users to participate in their data union via either an iOS or Android application. According to Keith Axline, Re-public DAO has a utopian view, whereby, “you get to collect all the data that everyone is making money off of and you get to see it first, you get to control it, and you get to decide if and how it is shared.”

Check out the full panel recording (above) for additional background on how data unions are laying the groundwork for decentralized data sharing and consumption.