“Developers, developers, developers!” Steve Ballmer bellowed on-stage, his shirt drenched in sweat as he repeatedly chanted the word at a Microsoft conference twenty years ago. He was making the point, in his usual over-excited way, that developers were of central importance to his company.

We can chuckle today at that YouTube video of Ballmer, but actually, he was spot on: developers are critical to software innovation. Yet sometimes we forget that. In the Dot Com era, Venture Capitalists held sway. In the web 2.0 era, entrepreneurs rushed to take advantage of “user-generated content.” In the mobile era, everyone fell under the control of social media algorithms. Developers, of course, participated in each era — but other forces were driving the market, whether it be the greed of investors or the vanity of “influencers.”

In the cloud native era, that’s all changed — developers have come to the fore once again. When Amazon launched its first cloud service in 2006, if you listened closely you would’ve heard a faint chant of “developers, developers, developers!” start up again. But if you missed it then, the chant was a loud, rhythmic pulse by the time Docker launched containers in 2013.

Developers are in the driver’s seat again partly due to the complexity of this current era (we need developers to navigate the cloud). But it’s also because of the massive scale of applications now. A consumer service like Netflix or Spotify could not run anywhere near as efficiently as they do today, without cloud services and distributed computing.

One person who noticed this shift early on was Tyler Jewell, who is currently managing director at Dell Technologies Capital (yes he’s a VC, but he assured me his roots are in development). Jewell has come up with a thesis called the Developer-Led Landscape, which is divided into 22 main segments — including App Servers, Developer Enablement, Code IDE, and CI + CD + Build. He’s also made available a GitHub repository, which lists every company and product in the thesis, mapped to categories, segments and specializations. 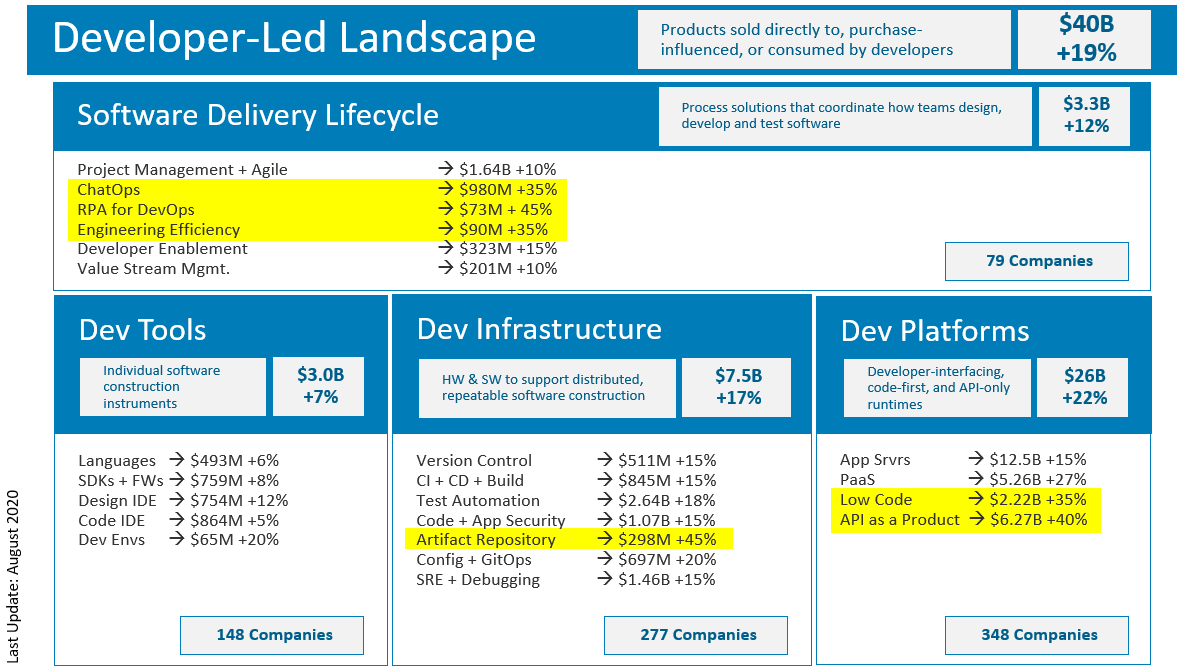 I spoke to Jewell to ask him about his thesis, why developers are so important to this era, and which emerging dev-led markets he has his eye on.

The Evolution of a Thesis

I began by asking what was the inspiration for the Developer-Led Landscape and when did he come up with it?

“I was always kind of a junkie for developer tools and the businesses that create them,” he replied. But over the years, he noticed an “ambivalence or disdain” in the market about developer businesses. He saw an opportunity, so he became an investor with a focus on developer tools.

But he knew he needed to further define his thesis; and what better way to do that than by launching his own developer tools startup. So in 2012, Jewell founded Codenvy — a company that provided cloud workspaces for development teams.

InApps Technology first wrote about Codenvy in October 2015, noting that “Codenvy started using Docker in 2013, making it one of the earliest adopters of container technology.” Clearly, Jewell and his business partners had caught the cloud native wave very early. That momentum continued until mid-2017 when Codenvy was acquired by Red Hat.

Fast forward to 2020 and Jewell is back doing investing full-time, this time as managing director at Dell Technologies Capital. In this role, he decided to fully flesh out — and make public — his thesis that developer tools are a huge (and still growing) market.

“I had been building a database for over a decade,” he explains, “and there were just so many interesting trends and conclusions that we can draw from it, that it just felt like it was time to get it out there, share it and use those trends and the data to help other people understand the value proposition.”

What Trends Has Jewell Identified?

One of the biggest findings in Jewell’s data set is that the combined revenues of developer platform businesses are “collectively 2.5x the revenues generated by tools and infrastructure.”

In his GitHub repository, Jewell defines developer platforms as “developer-interfacing, code-first, and API-only runtimes.” These products and services include application servers, Platform as a Service (PaaS), Low Code, and API as a Product. There are 348 such companies in the dev-led landscape, such as Twilio (API as a Product), Vantiq (app servers), OutSystems (Low Code), and Cloudflare (listed as a PaaS for its Workers product, in the serverless sub-category).

API as a product is particularly fast-growing, at 40% year over year according to Jewell’s calculations. I asked him what trends he’s noticing with APIs that are driving this growth?

He noted that APIs for communications, fintech and healthcare dominate the API market (Twilio, mentioned above, is in the communications sub-category). But the APIs he finds most intriguing “are the ones that do the least.” He says he’s come across at least 50 or so APIs that “just do one thing and they do that one thing really well.”

Another fast-growing developer tools segment is Artifact Repositories, which is up 45% year over year. As the name suggests, these are companies that provide repositories of software code. The market for this is being driven by a fundamental change in how much developers now rely on “reusable modules.” In his thesis, Jewell wrote that at the turn of the century, “80% of a new application was custom code, and 20% was sourced from a reusable component.” But now, according to his analysis, “in 2020, 20% of an application is custom code and 80% is sourced from a reusable module.”

Jewell’s Dell Technologies Capital was an early investor in one of the market leaders in artifact repositories, JFrog. The Israeli company recently had its IPO and is currently worth $7.5 billion on the NASDAQ. According to Jewell, JFrog’s Artifactory product has come to “dominate” the market because of two “unique qualities.”

“One is they weren’t biased to any particular programming language or build system, so they were agnostic and supported all kinds of different modules and libraries. They were really the first to do that. And the second is that you could really use it in any sort of environment — cloud [or] on-prem. And that was a hard problem prior to [JFrog].”

How Developers Feel about Kubernetes

The developer-led landscape shows no sign of slowing its growth. Indeed, when I asked Jewell about Kubernetes and how developers feel about its complexity, he implied there’s a big opportunity there for developers.

“This is the first time in 50 years that we have an infrastructure paradigm shift that has appeared before the developer paradigm shift,” he said.

He’s saying that at the time containers and then Kubernetes emerged from 2013 to 2014, there wasn’t yet a programming paradigm for microservices. This helps explain why developers have struggled to adapt to Kubernetes. As for which development paradigms are emerging now, Jewell cites the Reactive architecture as one of the most promising.

“It’s a means by which developers can create stateful applications and scale them and run them on top of Kubernetes,” Jewell said about Reactive (it must be noted that Reactive was an initiative of Lightbend, another Dell Technologies Capital investment). He called the Reactive Foundation, which is part of the Linux Foundation, “the developer companion to the CNCF” [Cloud Native Computing Foundation].

He also cited event-driven architecture and serverless as two other trends that are helping developers in a Kubernetes world.

Get Ready to Chant…

There’s a lot to be excited about in the developer landscape in 2020, especially now that Kubernetes is becoming “boring.” Because cloud infrastructure is solid and dependable, the cloud native community is starting to focus more on what’s being built on top of it.

InApps Technology is a wholly owned subsidiary of Insight Partners, an investor in the following companies mentioned in this article: Docker, JFrog.