While most families in the United States already have cars, most Chinese families are still new to life on wheels. For these new Chinese drivers, cars are not just tools of transportation, but are more or less a sign of achievement and exclusivity. This is why we see the Chinese obsession with longer wheelbases, LED headlights and other luxuries such as real leather seats. Chinese drivers really want their cars to be luxurious—and there are few things more fancy than Internet connected cars.

Ford is vying for the China market by open sourcing its technlogy and capturing the interest of app developers, who are increasingly in demand, especially in the connected car market. The demand for this talent pool  is evident in the investments being made. Nokia is investing $100 million to foster a developer ecosystem in China and other parts of the world.

About 12 million cars were sold in China last year, up 12 percent from the previous year, according to a story by WardsAuto. Smartphone ownership is showing massive growth with an estimated installed smartphone base of more than 500 million. That’s more than the US and Western Europe combined. 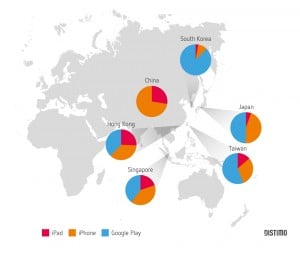 And the app ecosystem is following, with China now one of the fastest growing markets in Asia. 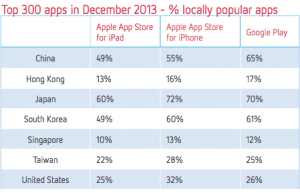 However, despite the interest in mobile apps, a series of problems needs to be solved:

The update cycle: Mobile phone apps often update automatically but a car only gets maintained if it is done manually, often by bringing it into the shop.

Customization: If your car is shared among family members, the connectivity has to be personalized to the tastes of the different drivers and passengers. For instance, I love listening to Pandora while driving, but my wife may prefer an app that tells her whether there are sales nearby.

Fragmentation: There are dozens of car manufacturers in the world—each with its own platform and programming requirements—which makes for a difficult developer environment.

Earlier this month at the Global Mobile Internet Conference in Beijing, Ford introduced its SmartDeviceLink, an open-source version of its Applink technology, and announced partnership with Baidu Maps and AutoNavi Maps, which together constitute more than half of China’s map business.

Applink, first available in some 2011 model year vehicles, is a mobile app module that connects users’ mobile phones with the car. Developers need to add only a small module into the already existing Android or iOS app for it to work.

With Bluetooth or a USB cable, information in the mobile phone is projected to the dashboard screen of the vehicle. The vehicle itself doesn’t store applications, leaving the burden of upgrade and else to the phone.

Smart Device Link is an open-source version of Applink, provided by Ford to the GENIVI Alliance, a non-profit industry alliance committed to developing an open-source development platform for in-vehicle infotainment systems.

GENIVI currently has over 170 members including Nissan, Volvo, and BMW. Apps based on SDL will be available not only to Ford vehicles but also to other manufacturers as well.

“In this framework, developers will be more successful in reaching the connected car market because they will have more access with their apps,” said Trevor Worthington, Vice President of Product Development, Ford Asia Pacific.

Ford is trying to boost the overall pool of developers. “Your base has to be big enough to look attractive to developers,” said David Huang, Senior Manager, Technology and Business Development, Connected Services, Ford Asia Pacific. For mobile apps, even an install base of several million isn’t big. But it’s already an awesome number for a single manufacturer to sell a million vehicles per year in China.

The hope is that more manufacturers will open up more to developers and continue to increase the size of the installed base.

It does seem that using open source as a way to connect cars will help build a developer ecosystem. Applications will not need to be embedded in vehicles specifically, and passengers will be able to bring their already personalized mobile phone experience to their vehicles. A universal standard for applications will also ease fragmentation, making one app available to more than one manufacturer.

But it doesn’t mean that Ford will automatically take the lead in car connectivity simply by exporting its Smart Device Link and setting the standard. The common platform of Smart Device Link and GENIVI will have to compete with other similar causes like the Open Automotive Alliance through which Google is trying to extend its Android system to cars.

Horae Lu is a journalist based in Beijing.