This week, GitHub kicked off a new initiative called Open Source Friday, a structured community program to encourage regular contribution to open source during work hours on Fridays. The program provides a framework for regular contribution, along with resources for employers.

The program stems from GitHub’s own internal effort for encouraging open source work on Fridays as well as the results of GitHub’s Open Source Survey, released earlier this month. A key finding was that virtually all respondents use open source at their place of employment and that the vast majority (85 percent) were interested in contributing back — but were unclear how to do so in their current workplace.

The survey results quantify what we already intuitively understood: Ever greater numbers of enterprise users rely upon open source solutions. (W00t! Open source won!) Fortunately, many companies realize that giving back to the OS ecosystem by allowing, even encouraging, employees to contribute open source work while at work makes for good business. Contributing to the software you already use isn’t altruistic — it’s an investment in the tools your company relies on.

But the survey results also indicate that many employers lack clear and definitive policies and IP agreements regarding what kind of contribution exactly is allowed, and under what terms. Thus, as a first step, participating companies — and even individuals — should probably contemplate GitHub’s Balanced Employee Intellectual Property Agreement before moving forward. 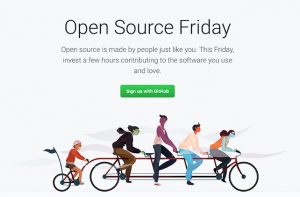 Open Source Friday provides a structured, procedural framework for getting involved with open source, a couple TGIF hours at a time. First, comes GitHub’s How to Contribute to Open Source guide, which emphasizes to beginners and veterans alike that open source needs much more than just code contributions. Designers, writers, event planners — it takes an entire community’s worth of effort to incubate, and then maintain, a thriving and successful open source project. Resources like Your First Pull Request pave the way for absolute n00bs, while Anatomy of an Open Source Project explains how it all fits together.

From there, those wanting to join in the Open Source Friday fun can follow GitHub’s handy guide for choosing the best project to become involved with. Pro tips include important but sometimes overlooked-in-enthusiasm due diligence, like making sure a project is actively accepting new contributions before diving in. Checking if pull requests actually get reviewed, whether maintainers respond helpfully to questions and whether the community surrounding an open source effort is friendly and welcoming (pro tip: lots of flame wars is a huge red flag against joining a project unless that sort of thing is your idea of fun).

In short, the Open Source Friday program has it all. The step by step hand holding for those who have always wanted to contribute but never been quite sure how. A framework for seasoned open source vets to regulate and maybe even increase their contributions. The program helps track and share Open Source Friday-specific contributions and even has materials/resources to help you convince your employer to allow your department to spend Friday afternoons working on cool OS project work above and beyond your usual job duties. Kind of like an open source happy hour.

Once the bosses hear that companies like Google, Microsoft, Facebook, Comcast, Travis CI, and thoughtbot all encourage staff developers to do open source work as part of paid employment, well heck — they might even buy the beer.