GitPod, the company that allows developers to spin up automated cloud dev environments in the cloud, has released the open source OpenVSCode Server, which lets developers run upstream Visual Studio Code (VS Code) in the browser.

The release follows last year’s launch of GitHub Codespaces by GitHub and Microsoft, which Gitpod co-founder and CEO Sven Efftinge points out remains closed source, with no apparent plans of being provided otherwise.

“Microsoft hasn’t published the secret source that you need in order to run it in browsers, and since so many folks were approaching us and asking ‘How do we do that?’ we thought it might be a good idea to just extract that secret source and put it into its own project and then release it,” said Efftinge.

It is important to note, said Efftinge, that both GitPod and GitHub Codespaces are “much, much more than just the web IDE,” but that providing access to developers’ favorite tool remained a key part. A number of companies have joined in support of GitPod’s OpenVSCode Server with this release, including VMware, Uber, SAP, and Sourcegraph, with many having already built remote development environments internally for their teams.

OpenVSCode Server, however, brings the VS Code IDE to individual developers, and Efftinge offered RStudio as an example, where a remotely accessible VS Code would be useful.

“The VS Code tech is a great foundation to build the next generation data science IDE. It has a really good integration through VS code extensions for data science work. So they have an interest in running VS Code within their SaaS solution,” said Efftinge. “We also talked, in light of this project, with Uber, with Spotify, and it turned out they all have these internal projects, where they provide dev environments to their users in some sense, and they want to provide a VS Code interface to them.”

Efftinge said that, overall, they are seeing a trend of companies moving to remote development for a variety of reasons, including the limitations of developers’ machines and the increasing prominence of things like microservice architectures and data science, which can require more power than can be provided by a laptop. 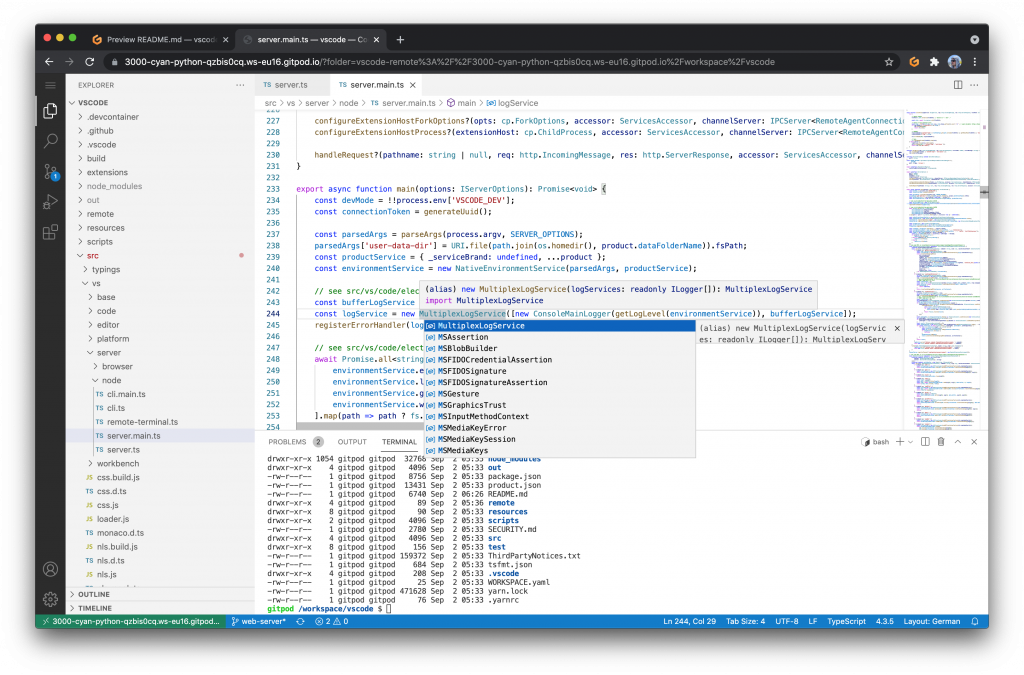 With OpenVSCode Server, developers can simply run a Docker command to install the project on their local desktop machine and then work remotely from a much lower-powered device, such as an iPad or Chromebook. Moreover, they can install OpenVSCode Server to the cloud, and the project includes guides for running on AWS and Google Cloud, for the data science use case, for example.

Behind the simple act of bringing developers access to their favorite IDE, Efftinge outlined a few other reasons behind the project. First, he noted that browser-based IDEs are becoming a commodity and that “This is no longer something where companies should spend on competing there, but they should really collaborate and work on this together. That’s why we put this out as open source. There is no reason anyone should need to build a competitor or a new solution to this. It is just like, you know, the Linux of IDEs.”

Beyond that, added GitPod co-founder and COO Johannes Landgraf, “we see people hacking VS Code, big-time patching it, doing lots of unnecessary things because they don’t really understand the architecture. We just thought that’s just not necessary.”

And so OpenVSCode Server, which Landgraf said is just a few hundred lines of code, provides this maintained remote server for upstream VS Code in the browser, eliminating that need for forks and fragmentation. Keeping the project small and simple, said Efftinge, is really the entire plan for the project moving forward.

“We want to keep it small and lean. The focus here is really not to build something on top of VS Code, but just to complement it with being able to run it in various contexts. We won’t add features or end-user features or something like that to that codebase. I hope, maybe eventually, that the VS Code team itself picks this up, so there is no need for a downstream project,” he said.

InApps is a wholly owned subsidiary of Insight Partners, an investor in the following companies mentioned in this article: Docker, Sourcegraph.