Read more about Has Serverless Jumped the Shark? – InApps Technology at Wikipedia

Mark has a long history in emerging technologies and open source. Before co-founding TriggerMesh, he was the executive director of the Node.js Foundation and an executive at Citrix, Cloud.com and Zenoss where he led their open source efforts.

The tech industry is like no other when it comes to a new innovation or trend. Over the years, we have seen the rise of various technologies and the frenzy of technologists looking to jump on board. In the late 1990s, there was unprecedented fanfare around Linux, and eventually, it took over the industry as the leading server operating system. In the early 2000s, it was virtualization with VMware and Xen leading the way, and eventually KVM (Kernel-based Virtual Machine) — all increasing server utilization, which paved the way for cloud computing. Today, Linux and virtualization underpin the cloud and have a bigger footprint than ever before. And yet, their ubiquity almost makes them invisible. It’s more or less taken for granted that they provide the foundations for what we do in cloud computing.

Today’s hyped technology conversations center around containers, Kubernetes and serverless. Some of these things will fade into the background of the conversation, just as Linux and server virtualization have, but they will remain part of the everyday cloud infrastructure for things we use. In some cases, today’s new technologies are just the manifestation of architectural patterns that have been around for many years. Serverless uses event-driven architecture (EDA), which has been around for decades. Similarly, containers are application-level virtualization, which has been around since the early days of the mainframe.

At one point in my career, I ran the Node.js Foundation, the trade organization that promoted and shepherded the popular server-side JavaScript framework. At the time, Node was the most deployed workload on Amazon’s serverless offering, Amazon Lambda. That sparked my interest in serverless. The advantage of AWS Lambda was that it provided a managed service that allowed developers to easily deploy Node.js (server-side JavaScript applications). The irony is that while serverless was critical for delivering workloads, it wasn’t the point. This is the mark of truly valuable technology.

Today we see via Google Trends that the mentions of serverless are dropping.

Google Trends: Interest over Time for Serverless (retrieved on April 23, 2021)

The hype around serverless is going down, but the usage is going up according to industry reports. According to a recent report from Datadog, on average, Lambda functions were invoked 3.5 times more often per day at the start of 2021 than they were two years prior. So use of serverless is rising, even if the hype isn’t. 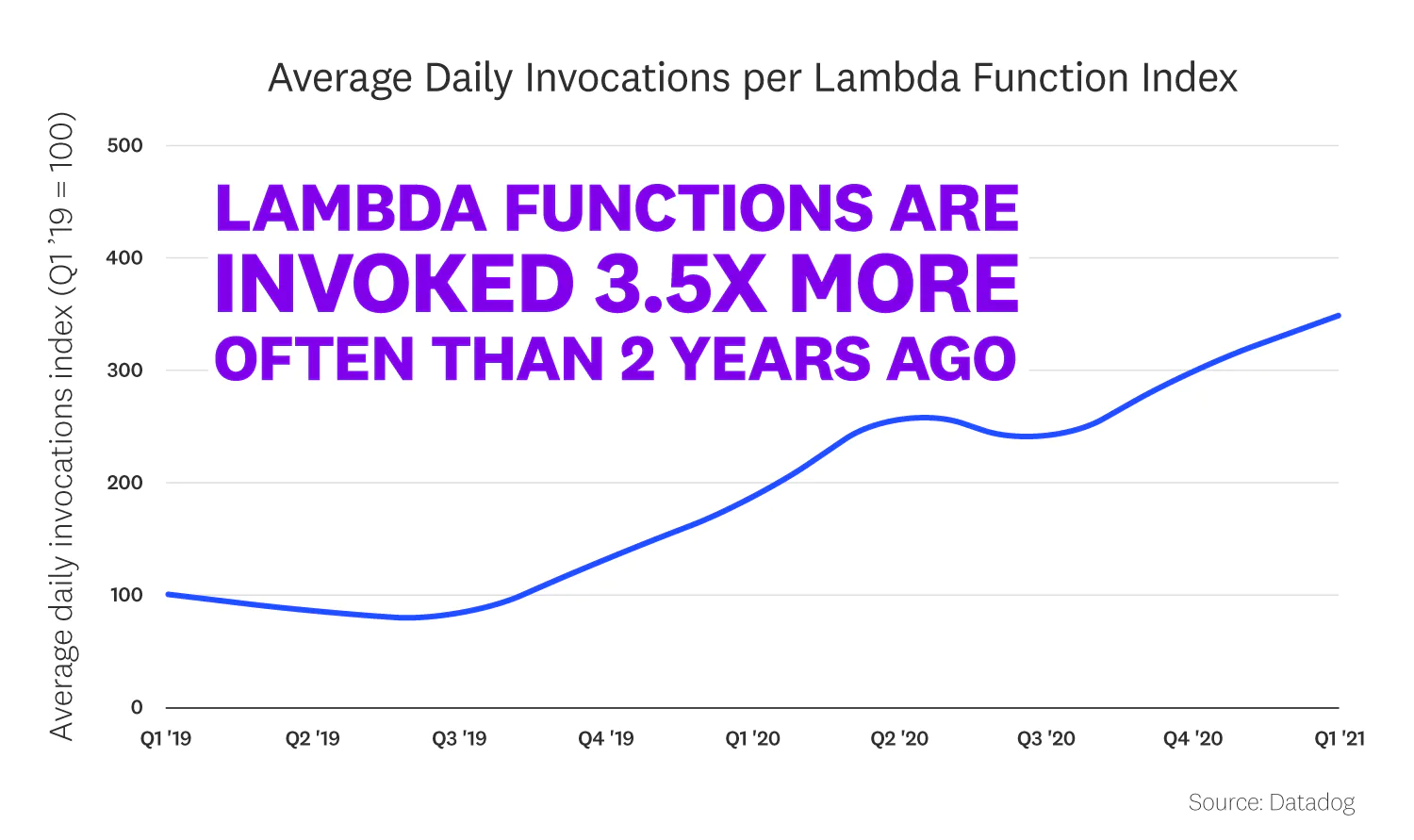 At the same time, we see a marked increase in talk around digital transformation. Just as the function-as-a-service aspect of serverless helped enable delivery in Node.js applications, it also enabled the integration of digital technology into all areas of a business, fundamentally changing the way companies are building their technology.

Google Trends: Interest over Time for DevOps (retrieved on April 23, 2021)

Infrastructure as Code and Integration as Code

Like serverless and Kubernetes, the DevOps methodology has also received much hype. Among other things, DevOps gave us infrastructure automation, the idea that infrastructure can be managed the way we manage software, by automating creation and keeping configuration data in version control. This approach was called infrastructure as code. We believe the next evolution in that methodology is actually integration as code, where services and applications are integrated via declarative APIs and become part of the automated process that deploys infrastructure.

Serverless Today and Next Steps

Today’s hyped technologies — such as functions-as-a-service offerings like Amazon Lambda, serverless frameworks for Kubernetes like Knative and other non-FaaS serverless solutions like database-as-a-service (DBaaS) — are the underpinnings of more advanced delivery systems for digital business.

New methods of infrastructure delivery and consumption, such as cloud computing, are as much a cultural innovation as a technological one, most obviously in DevOps. Even with these technological innovations, companies will still consume a combination of legacy application data, modern cloud services and other serverless architectures to accomplish their digital transformation. The lynchpin isn’t a wholesale move to new technologies, but rather the ability to integrate these technologies in a way that eases the delivery of digital experiences and is invisible to the end-user.

Serverless hasn’t jumped the shark. Rather, it is maturing. The Gartner Hype Cycle, a graphic representation of the maturity and adoption of technologies and applications, forecast in 2017 that it would take two to five years for serverless to move from a point of inflated expectations to a plateau of productivity. 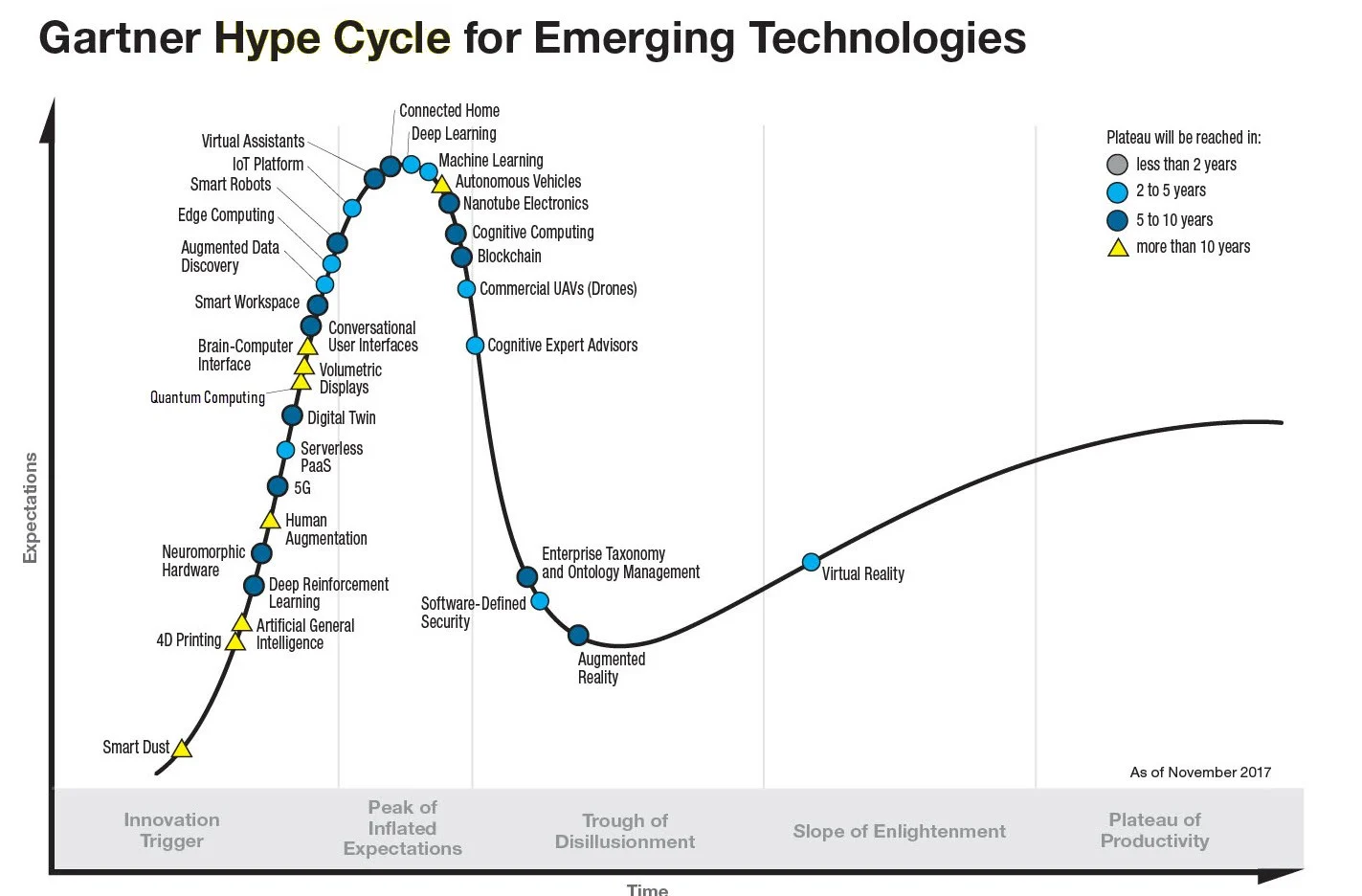 That’s where I believe serverless is today, the plateau of productivity, with increased use and less discussion. I think the next stop is even better integration between serverless and other cloud services and applications.