The cloud-agnostic open source platform IronFunctions, from Iron.io, reflects a more nuanced approach to hybrid cloud that is emerging in the enterprise market.

Many large businesses are attracted to cloud hosting solutions because of the speed of innovation and the available range of tooling for distributed application architecture design. But both new and continuing concerns around the security of cloud storage and growing worries around a potential Amazon Web Services monopoly with its Lambda service are bringing many companies back to re-evaluate the ideal mix of on-premise and cloud as a way to manage their infrastructure stack.

IronFunctions offers a serverless platform where businesses can run applications and workflow patterns on private, public, and hybrid clouds. Which, bizarrely, means serverless can be run on-premise (that is, with servers). Here, the tooling means that enterprises can treat their own data centers like private clouds, gaining many of the cloud hosting benefits around speed of development and reduction and automation of DevOps workloads, but on their own hardware.

“One of the main reasons we wanted to do this is for Fortune 500 companies who want to run serverless on-premise,” said Travis Reeder, Iron.io chief technology officer and co-founder. Reeder said companies want the power of using Lambda functions, “but don’t want it on Amazon, they want to run it mostly in their own data centers.”

Reeder sees several drivers for this that mirror discussions many enterprises are having at the moment.

The first driver is about security concerns. Many enterprises are still reluctant to transfer customer and business data to cloud hosting providers. They want to manage their data on-premise but have the advantages of cloud in terms of innovation capacity, speed of development, and capability to design very specific solutions for their business case. Enterprises have also been burnt by vendor lock-in agreements with big suppliers and as they break down their monolithic legacy code base, they are looking for architectural solutions that might free them from those long-term contract constraints.

That’s where choosing AWS is moving from an enabler to a concern. In the U.S., enterprises are more frequently looking at how to stay behind their firewalls to ensure data security. And globally, recent comments by the newly inaugurated U.S. President suggest that international businesses may need to start looking for non-U.S. data storage providers.

In Europe, a current consultation on building an open data economy is recommending the reduction in data localization laws. Data localization refers to specific national laws that might require data storage to be located within the country’s borders. For example, Germany has a data localization law for financial technology sector where certain customer financial records must be stored in the country. That gave rise to Microsoft Azure Germany’s product solution to help businesses conform with that regulation. The European Commission’s consultation is currently arguing that such laws slow down innovation and are an impediment for a vibrant tech startup culture.

U.S. President Trump’s executive order on public security removed privacy safeguards for foreigners. The executive order notes that “agencies shall, to the extent consistent with applicable law, ensure that their privacy policies exclude persons who are not United States citizens.”

That has raised serious worries for the enforcers of the EU-US Privacy Shield (of which most cloud hosting providers, including AWS, Google and Microsoft, are signatories), which certifies that U.S. cloud hosting providers will adhere to European data protection laws. Last week, EU Justice Commissioner Vera Jourova sought assurances that the Privacy Shield agreement will remain intact. European governments and businesses may start looking for solutions other than U.S. cloud providers in any case.

Even for U.S. businesses, the underlying principles of the public security measure may lead companies to want to stay on-prem rather than expose their data to potential government surveillance.

Avoiding a New Round of Vendor Lock-in

Aside from the security concerns, an increasing number of enterprises are also worried about the monopoly positioning of AWS. While impressed by AWS’ innovation capacities which, along with containerization, have helped reinvent much of today’s global application architecture approaches, there are some mumblings that perhaps AWS is taking too much of the pie, recreating the vendor lock-in issues that businesses are only just starting to untangle from their previous IT contracts.

Reeder is seeing some of this play out with Lambda. “One of the things we provide is that you are not locked into Lambda. Usually, if you start using AWS Lambda, you are stuck within their ecosystem. If you are using us, you can run functions on any cloud platform or your own hardware. It is the speed of the cloud but on-prem,” said Reeder.

IronFunctions allows users to create both synchronous and asynchronous functions, as well as run worker jobs. The platform lets developers create APIs, microservices and functions and combine those together in applications and also run them as background jobs. “When you think about it, 100 percent of apps have a synchronous component. Then there is the background stuff, but that’s not where you tend to start as a developer. With IronFunctions, you can cover a lot more bases: you can build APIs, build microservices… Functions has an API gateway built into it,” said Reeder. 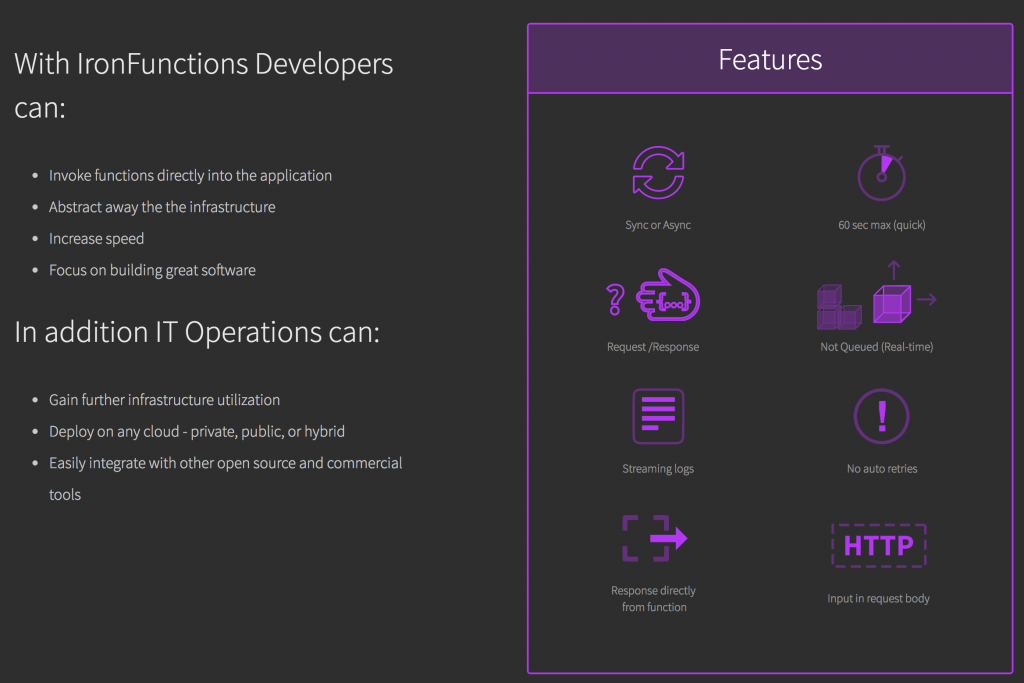 A final driver that is reimagining what hybrid means is cost. Enterprises that have their own data centers want to follow an AWS model themselves and gain more optimization benefits out of the unused portion of their data center assets.

“Serverless is hugely important at an infrastructure level,” said Reeder. He points to AWS Lambda’s pricing model as allowing businesses to only pay for the second or millisecond of compute power used. “Current data center utilizatization is estimated to be between six to twelve percent, the rest of the time the servers are just idle, keeping the lights on,” Reeder said. “IronFunctions enables you to share that hardware across any number of apps, which automatically reduces the amount of hardware required.”

This is where Reeder sees an eventual business model coming out of the open source offering. Already the team behind IronFunctions is working on advanced metrics that could work on the platform and be offered as a commercial addition. That can include more granular understanding of how APIs are being utilized as an API may be made up of functions and microservices endpoints, allowing much deeper insights into what API calls are being made, which could help businesses to innovate on their public and partner API business models.

But more than that, advanced metrics can lead to the introduction of AI optimization solutions that continuously work to reduce the cost of hybrid cloud and on-prem infrastructure. Reeder explained: “For example, you can run a workload on ten machines, work out which one is the most efficient and then you move workloads to those types of machines. It is a whole different paradigm from what we are used to: you can dynamically move workloads around, or even to a different cloud altogether if it is more efficient. Next, we want to try and automate that. Based on metrics, you should be able to have a system that can automatically move things around. We already do this with IronWorker, for auto-scaling based on AI optimization. We keep track of things like queue sizes and number of runners, so it is different metrics to just optimizing based on app’s CPU. We are looking at taking some of that and letting people run it on premise with IronFunctions.”

As IronFunctions moves towards its General Availability launch date by April this year, the platform is expected to consolidate. Reeder’s roadmap is to keep IronFunctions main core solid and simple, with additional functionalities offered as extensions, plug-ins and add-ons rather than inherent platform features. Given its potential use in hybrid and on-prem, the focus for now is on making sure it works within OpenStack environments. Already, when certain events occur in an OpenStack architecture, Functions can trigger actions, in the same way that in Amazon, adding a row to a DynamoDB database or uploading a file to S3 might trigger a lambda function to carry out some task in the background.

Beyond OpenStack, there are already scripts to fire up an instance of IronFunctions within the Kubernetes and Docker Swarm container orchestrators, although Reeder also has sights on building those more formally.

A New Approach to Hybrid

Iron.io aren’t the only ones trying to move to where enterprises are redefining what hybrid means to them. Replicated, for example, is built for SaaS providers who are looking to add enterprise-grade features and offer deployment to enterprise customers behind the firewall, running in the company’s data center or private cloud. Kontena provides tooling to run containerized applications on any cloud infrastructure or on bare metal servers.

Where hybrid was often seen as a way to allow enterprises to take their first steps towards cloud, solutions like IronFunctions and this new breed of hybrid cloud management products are helping redefine hybrid not so much as a progression towards cloud-based, but as a destination in itself, or even a way to bring the advantages of cloud back to a company’s data center hardware.

Iron.io is a sponsor of InApps Technology.