How do you feel about platforms that promise to deliver apps without coding? If you express some negative sentiment, then you’re like two-thirds of the customers Progress Software surveyed last year. Despite the bad feelings, a review of recent surveys shows that use of low-code platforms has increased and will continue to do so in the near future. The main reason is that the platforms kill two birds with one stone — they address long-standing development challenges that are holding back company-wide digital transformation efforts. However, it is important not to oversell the benefits, which are mostly associated with increasing the speed of development and less about allowing business units to innovate and create code themselves.

These bad feelings are not ill-informed because low-code environments are already in use by 80% of developers use a low-code or no-code application development environment according to a recent Evans Data survey. However, the same survey also found that only 9% of developers are using these environments at least 75% of the time. As low-code platforms increasingly become part of IT strategies, executives should remember that while these tools can democratize coding, the core audience for these products are skeptical professional developers that are likely to rely on their primary tools to for everyday coding.

Based on a March 2019 survey of 3,300 IT professionals, OutSystems’ State of Application Development Report, 2019/2020 reported that 41% of organizations are using a low- or no-code platform, up from 34% when the company conducted a similar survey the year before. Of the group using a low-code platform, 69% say it is used by professional IT staff.

Assessments about the category’s success vary based on how the low/no code is defined. For example, “No-code” is usually a misnomer because according to Forrester’s John Rymer and Bill Seguin, practically all applications require some extent of coding for either: 1) integration, 2) customer user interfaces (UI), or 3) reporting requirements. The need for at least some coding explains why only 3% of the OutSystems survey said that a no-code platform is used by business units with no intervention from IT.

When asked just about low-code platforms in May 2018, only 23% of 3,228 developers surveyed worldwide by Forrester were using them, but another 22% planned to do so in the next year. The growth predicted in that survey appears to have come to fruition according to the more recent OutSystems data. Another survey of 254 IT and business decision makers responsible for digital transformation initiatives at large enterprises, conducted by Forrester on behalf of Appian, found that among 84% have implemented a low-code development tool or platform to handle a portion of application development. While this is close to the Evans Data finding, the adoption rate would likely be lower if it was only asked of smaller companies that do not have digital transformation initiatives.

The vast difference between the Evans Data and the other developer surveys is likely because developers think of a “platform” as a comprehensive solution that is purchased, and an “environment” as just one of many screens that speeds up the development process.

Another reason for confusion about adoption rates is the existence of non-professional developers who don’t report to IT but use tools sanctioned by IT for business-led development. OutSystems report found that 49% of organizations have so-called citizen developers at their company, which is higher than the 41% that use low or no-code platforms. Many vendors appear to be betting that they will be able to ride an adoption wave that lifts both overall use of the technology and purchases of vendor products and services.

Source: OutSystems’ “State of Application Development Report, 2019/2020.” The chart is based on a question asked only of the 41% of respondents with a low/no code platform already being used at their organization. 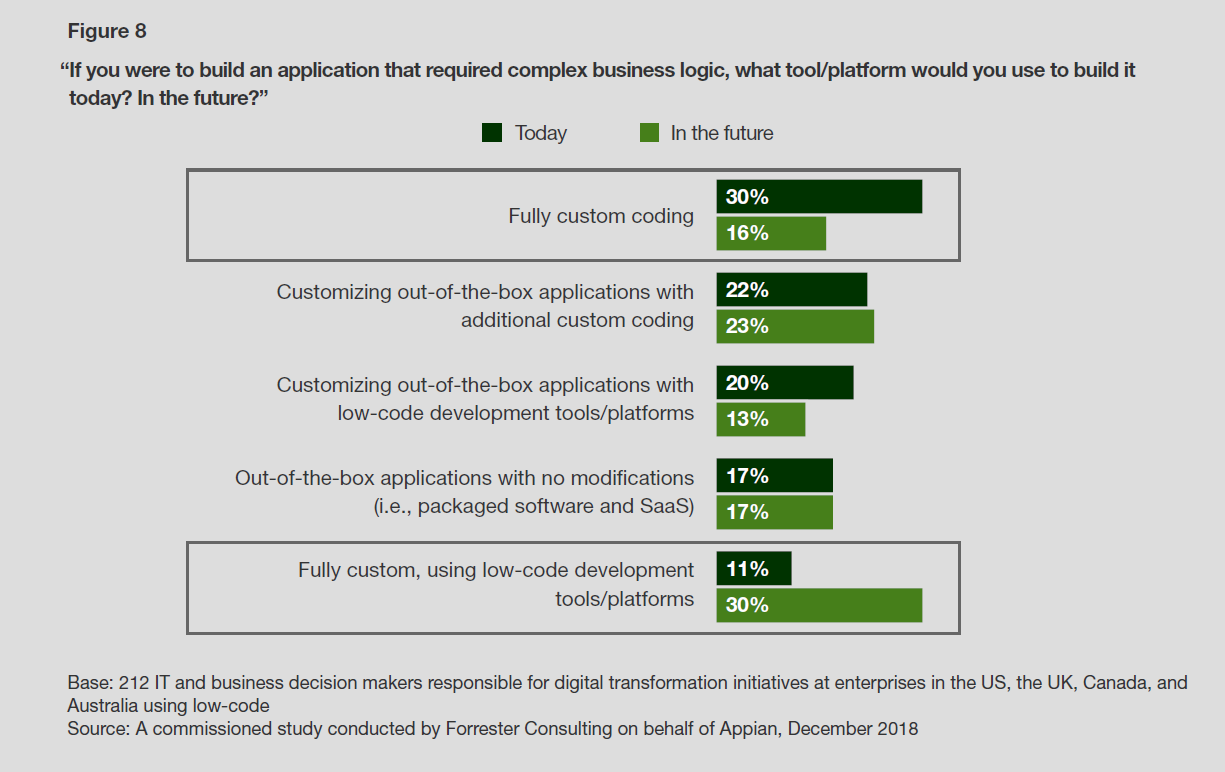 Accelerating digital transformation and increasing responsiveness to the business were the top reasons low-code platforms have already been adopted per the OutSystems survey. Reducing the difficulty in hiring developers was mentioned by 45% of respondents, with escaping technical debt coming in third at 28%. Only 22% mentioned enabling citizen developers to improve internal processes. These findings align with Forrester’s data about North American and European developers that are using or planning to use a low-code platform. Among this group, the top reasons to adopt are supporting product or service innovation, empowering departmental IT to deliver apps tell us their firms adopt, and empowering employees outside of IT to deliver apps. Lower on the list of was developing apps more quickly and improving several other developer-centric metrics. Over 90% of the aforementioned Forrester respondents said that low-code platforms have at least to some extent addressed challenges their organization faces in building custom applications using traditional coding. 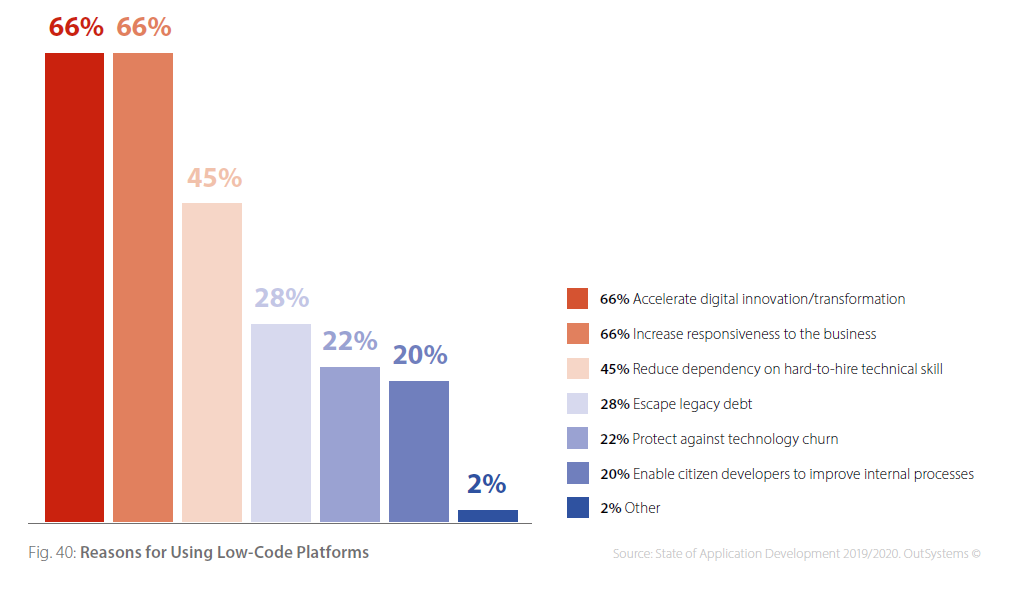 Source: “OutSystems’ State of Application Development Report, 2019/2020.” Twenty-eight percent of low-code platform users say escaping technical debt is a benefit. The theory is that low-code platforms generate less custom code that has to be reviewed at a later date.

The types of digital transformation people are talking about are primarily related to increasing the velocity of application development. Interestingly, even companies without low-code have are faster at software delivery than they were in last year’s OutSystems report. Still, low/no code platform users have seen even greater gains across a variety of metrics. Here are some 2019 comparisons:

Another Appian survey, this one conducted by IDG, found that 59% of developers believe low code platforms can be used to develop mission-critical applications and systems. Senior IT leaders are more optimistic as 79% agree with the statement. As stated earlier, most developers are exposed to low code software but choose not to use it extensively because of the fears about limited flexibility, and that most applications will need to be customized with code even if a platform is utilized. Other barriers to adoption are vendor lock-in, security and scalability concerns.

Two years ago, we reported that many low code vendors had already been evaluated and rejected. Perhaps this is because the offerings weren’t mature enough. Time will tell if the average developer will have something positive to say about the current low-code solutions that are being adopted by their managers.

Source: IDG/Appian Survey, “Impact of Low-code on IT Satisfaction”. Conducted in Spring 2019, half of the 300 respondents were senior IT professionals while the other were bother half identified as developers, engineers or architects. All respondents work at companies with more than 1,000 employees.