One of the most interesting internet trends of 2021 is the experimentation going on with decentralized technologies. We’re seeing a blossoming of open source, decentralized internet applications — many of them attempting to provide alternatives to big tech products. Privacy breaches, misinformation, black box algorithms, lack of user control — these are just some of the problems inherent in the proprietary, centralized social media and communications products of Facebook, Twitter, Apple, Google, and others. The question is: can decentralized applications be a panacea?

In today’s column, I look at an emerging decentralized, open standard for real-time communications: Matrix. It’s defined as “an open standard for interoperable, decentralized, real-time communication over IP.” Products built on top of Matrix could provide an alternative to using commercial Instant Messaging products like Slack or WhatsApp. The Matrix.org Foundation, a British non-profit organization, has lofty goals for the technology. It aims to “provide an analogous ecosystem to email – one where you can communicate with pretty much anyone, without caring what app or server they are using.”

Matrix has a lot in common with the other decentralized technologies I’ve looked at in recent columns:

What’s different about Matrix is that, unlike the other products I mentioned above, it has already reached a level of mainstream scale. Since it was launched in 2014, the Matrix network has gained “over 35.5M addressible [sic] users on the network.” While that number is not necessarily active users, nor is it on the scale of Slack or WhatsApp, it’s certainly an indicator of solid traction over the past seven years. By comparison, Aether, which I wrote about last week, barely has 2,000 users after three years.

No doubt because of the early success of the Matrix network, the creators recently accepted a $30M venture capital investment for their startup built to capitalize on Matrix. The company, based in London, is called Element, and it provides an “open source messaging client on top of Matrix.” The tagline of Element — “Own your conversations” — is a none too subtle dig at the Facebook-owned WhatsApp and the now Salesforce-owned Slack. Element’s stated mission is to “preserve your right to privacy, in the face of an increasingly centralized internet, and routine surveillance.” 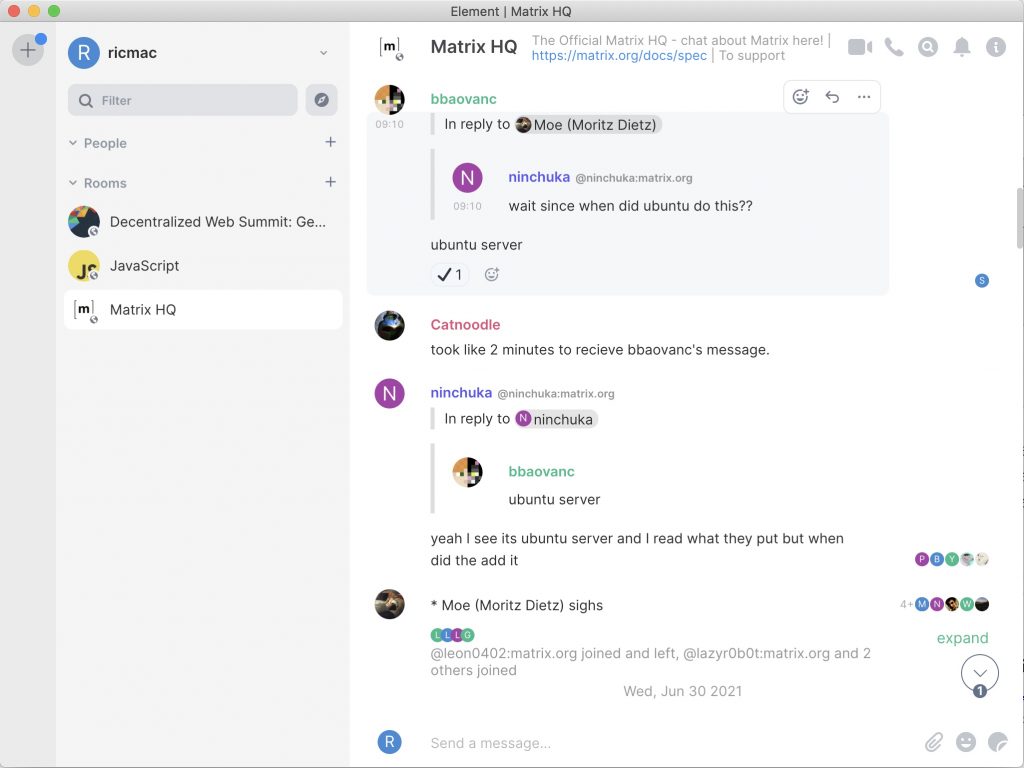 Element was founded by Matthew Hodgson and Amandine Le Pape, who launched Matrix in September 2014. In the blog post announcing the recent fundraise, Hodgson wrote that as well as improving the Element application, it plans to use the money to “finish building out P2P Matrix,” implement VoIP/video conferencing for Matrix, and improve its reputation system.

Read More:   What Everyone Gets Wrong About No-Code – InApps Technology 2022

In a separate post on the Element blog, Le Pape noted that Matrix has started to gain “real traction in the enterprise market with the launch of bridges for Slack and Teams (and Telegram and Discord) on EMS.” Element Matrix Services (EMS) is the company’s hosted solution, so it’s similar to using Slack in an enterprise.

The bridging technology that Le Pape referenced is perhaps the key to its future. A bridge is a server-based program that connects to an external app, like Slack, and makes the Matrix app at least somewhat interoperable with it. There are a variety of ways to implement a bridge, although what content and features are accessible is reliant on what the third party makes available.

There are two different Slack bridges, both of which allow you to “connect Matrix rooms and Slack channels together.” The first, matrix-appservice-slack, uses either webhooks or the Slack Events API. The second, mx-puppet-slack, “bridges slack and matrix together via (double) puppeting.” Both methods of bridging enable read-write access from Slack to Matrix, and vice versa. However, chat history is not available and there are other limitations — especially if you’re using the Slack app to get data from Matrix. According to The Register, “Matrix users appear as bots in Slack, and authorized Slack users appear in the Matrix.” 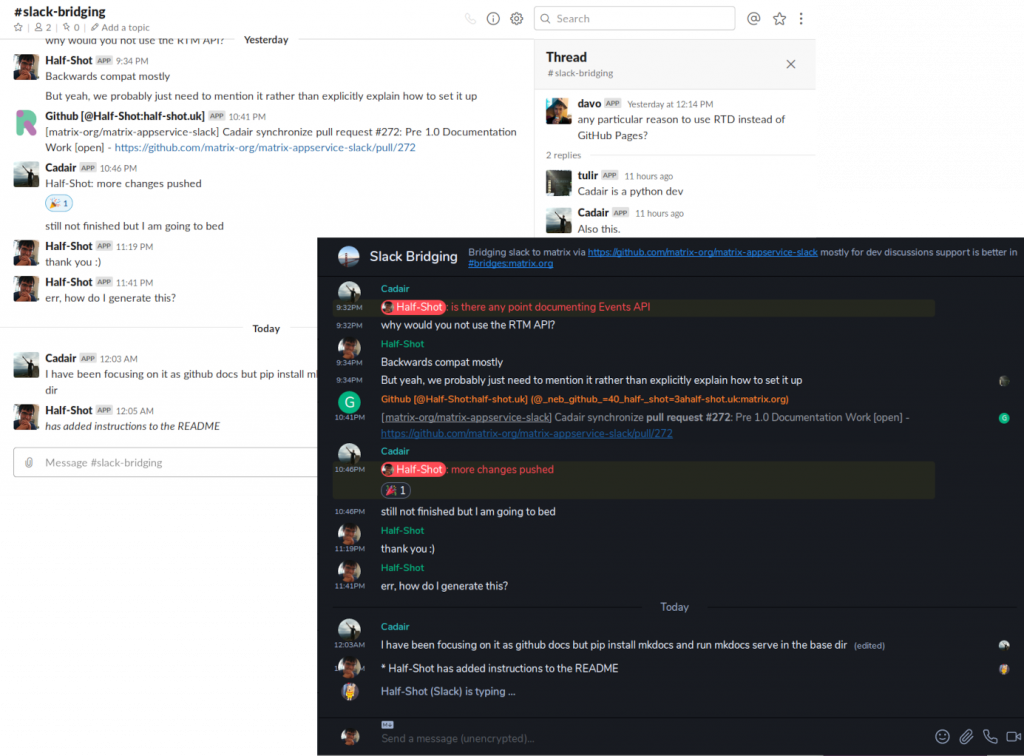 Slack bridging was launched at the beginning of this year, so it’s still relatively new. Although Element claimed that “Slack Bridging is intended to let Slack users remain in the [Slack] app,” the existence of a Slack Migration Wizard shows that Element wants to pull as many Slack users as possible over to its app. That will be what a good portion of that $30M VC money will be put towards, one imagines.

Hasn’t This All Been Done Before?

Matrix isn’t the first attempt at a decentralized, open standard for real-time chat. Extensible Messaging and Presence Protocol (XMPP, originally named Jabber) and Internet Relay Chat (IRC) have both been around for decades, trying to provide an interoperability solution for messaging. XMPP never really took off — at least partly because it was based on XML, a relatively complex and verbose web language. And while IRC has been around since the late 1980s, its usage has steadily declined since 2003 (also, the most famous IRC network, Freenode, ran into trouble earlier this year after a “hostile takeover”).

Mozilla switched from IRC to Matrix in 2020, an indication that momentum has shifted to Matrix when it comes to open source messaging. That doesn’t mean, however, that it’ll be easy to pilfer away Slack’s customers or take on the might of Microsoft Teams.

For Matrix to truly scale up, to hundreds of millions of users, it will need a groundswell of new users on the consumer and enterprise sides — and preferably users who use the app in both environments. Indeed, that’s how Slack itself rapidly scaled up, by elbowing its way into the enterprise through end-users who installed the app both at home and at work.

Still, Element and its Matrix protocol are closer to mainstream acceptance than any Scuttlebutt app or other decentralized apps like Aether. In a world increasingly wary of the overarching power of big tech, maybe the time is nigh to take the red pill and use Matrix.