Recent reporting claims computer science students don’t want to work for Facebook. Based on your ethics as developer, would work for Facebook? If open source is your thing, then perhaps you will bring some love to the recent Facebook hate fest.

For the privacy-minded, this past year has offered plenty of reasons for avoiding the social media giant, most notably its murky, ever-shifting privacy policies and seeming eagerness to share user data with other companies, from Cambridge Analytics to Netflix.

But Facebook is making significant contributions to leading-edge, widely used open source projects. GitHub’s annual Octoverse report says Facebook is fourth in the world in terms of corporations contributing to major repositories. Our own reporting showed that Facebook was in sixth place, but still punching above its weight class. The company has 474 active open active repositories in its portfolio. Impressively, 30 percent of the 94 thousand commits to these projects last year came from people that do not work at Facebook. Standouts among Facebook’s project include React, which has over 10,000 contributors, and Pytorch, a machine learning platform that happens to be the second fastest growing major project according to the GitHub report. 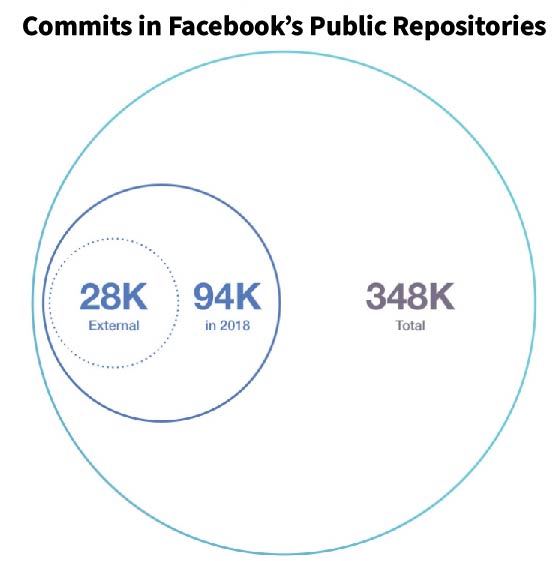 The tech community believes supporting open source is necessary to get the best talent. As reported before, hiring managers think that an open source aura helps with recruitment. Furthermore, 52 percent of developers believe their involvement in the open source community contributed to getting their current job, according to a 2017 GitHub survey. Our own research shows that open source initiatives provide many benefits, although developer happiness is not being a key reason for their existence

Despite these findings, we have yet to find proof that open source policies are a key reason to take a job. Instead, compensation continues to top the list of criteria when considering a new job, although the opportunity to learn and use new technologies are almost as important according to a recent Stack Overflow survey. Much lower on that list of reasons to take a job is diversity.

Being a leader in open source is not a panacea. Google’s contributions are even more noteworthy than Facebook’s, but that corporation has seen its own ethics come under question regarding sexual harassment and its work with the military. But at least Google is still viewed positively by the public. In contrast, more than any other big tech company, people think Facebook has a negative impact on society — and that is based on an Honest Data survey conducted before the negative press is received throughout 2018. The impact on its business has been real as 26 percent of adults recently removed Facebook from their mobile phones according to a Pew Research Center survey in June 2018.

With a profit-first mentality and business model revolving around personal data, Facebook may have become toxic. Yet, paradoxically, in the open source world its approach to intellectual property puts Facebook at the vanguard of corporate social responsibility. As future and current employees question the morality of working for Facebook, don’t forget its contributions to open source. 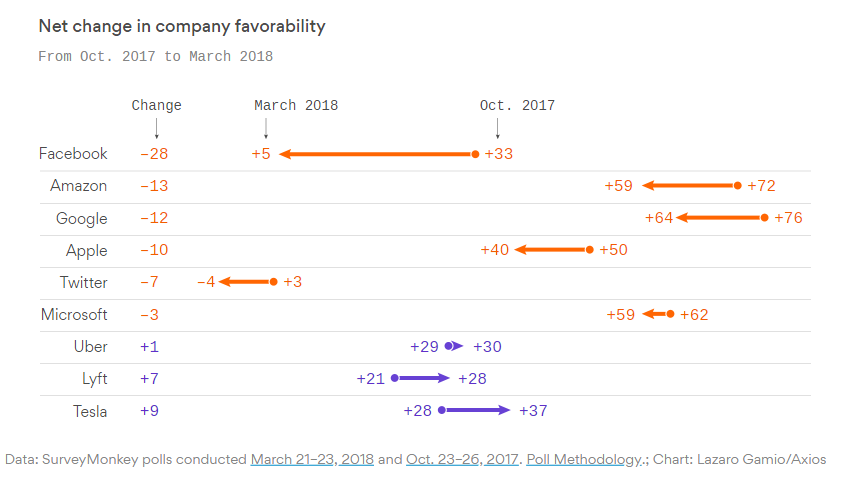 Source: Axios. Facebook saw its favorability plummet after the Cambridge Analytica scandal.  Google and Amazon are viewed better in this and many other surveys.