Rookout says its Live Logger tool release helps to solve problems developers often have when seeking precise logging data that does not interfere with the development process.

Some logging creates too much “noise” with an overload of information and associated costs when accessing the data. Other options require the developer to stop the software-production process to exit the command line and access another interface and scour through often superfluous data. Both scenarios hinder workflow.

According to Digital Enterprise Journal in its report ”Enabling Top Performing Engineering Teams,” 68% of respondents struggle with the challenge of “flying slow or flying blind.” The report describes how software developers without proper logging data are unable to create code and applications efficiently by lacking the information they require during the process. Others may continually halt the development process altogether and don’t go back to it until they have parsed through an overabundance of logging data in order to find what is needed to ready the code for a commit on Git.

Rookout says it designed Live Logger — which complements its Live Debugger tool — to allow developers to access the logging information they require directly with a single click. In this way, Rookout says the tool boosts “log verbosity.” This is because the developer activates the “info debug” or “trace logs” functions for a limited amount of time without changing code and without restarting the app, thus helping minimize logging costs. Noise is also reduced that unnecessary logs would otherwise produce, the company says. By providing the developer with the necessary information, the debugging process can take place while remaining within the developer command-line interface.

Traditional developer workflow involves attempting to “predict upfront about where logs will be necessary and at what verbosity,” Shahar Fogel, CEO of Rookout, told InApps.

“When an issue arises in production, developers have to hope they chose correctly — and if not, they have to write new code and re-deploy the application. This wastes a lot of time each time you need to re-deploy the application (not to mention it increases security risks),” Fogel told InApps. “Now developers can shine a flashlight on a problem area and get the data they want with a click of a button. They also no longer have to bother the operations teams with new deployments — they are being given a superpower where they can change log verbosity on the fly while the application is still running.” 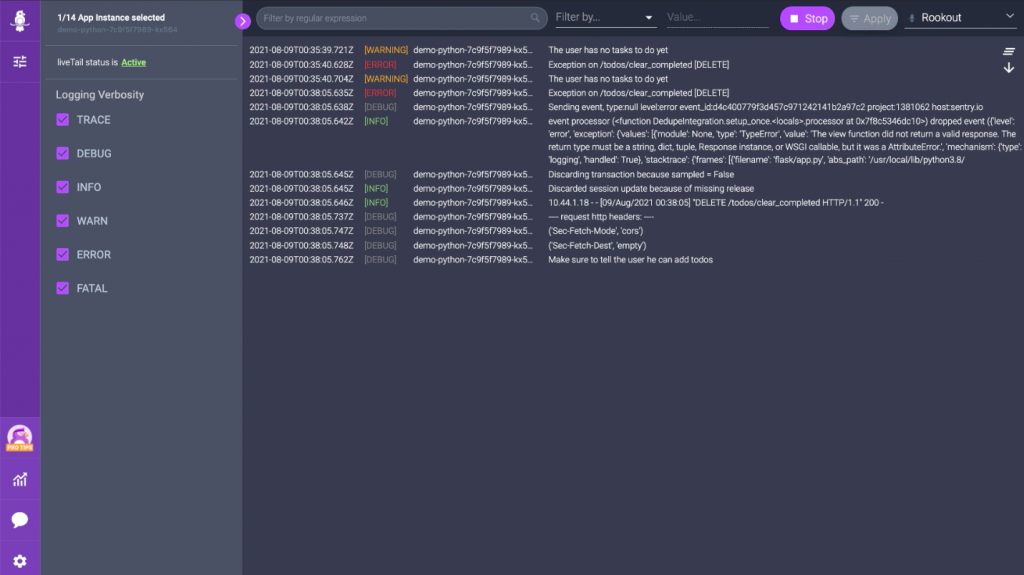 Live Logger also helps to solve the issues developers face when they are afraid they won’t have the necessary logs when a problem arises that a debugging team might reveal, Fogel said. “This quickly becomes too expensive and noisy,” Fogel said. “As developers ourselves, we found it frustrating to have to choose between a high Splunk bill or not having the necessary data when we wanted it.”

A typical use-case scenario is how developers must manage an issue, such as a customer complaint. “Now, as developers, we have to troubleshoot to try and find the root cause and resolve the issue as quickly as possible,” Fogel said. “Live Logger compliments our existing Live Debugging solution to enable dynamic observability by …allowing you to make changes to log verbosity on the fly, in production. This is made possible through instrumentation enabled via bytecode manipulation.”