“To be clear; I am a believer in decentralization. Having built systems with that I can tell you it is not the magic dust you are looking for.” — Amazon Web Services Chief Technology Officer Werner Vogels.

As we gear up to release our next e-book on the Kubernetes open source container orchestration engine (check with us in about a month), we have been reviewing how well K8s has been making its way into the enterprise — the true determinant of whether the software becomes an essential component of “InApps,” so to speak.

Reviewing our notes from Kubecon 2017, held earlier this year in Berlin, we found some powerful testimonies from both Salesforce and Comcast. Salesforce is using it in a pilot program to power three cloud-native services, with plans to be running 20 services by the end of the year. When the company’s engineers were considering different orchestration options, they immediately appreciated the smarts behind the Kubernetes. After all, many had come from other jobs managing large at-scale workloads. “We were, frankly, blown away. The development velocity was incredible, even back then,” Salesforce Principal Architect Steve Sandke said of the developers behind Kubernetes. “These people clearly knew what they were doing.”

Comcast has found that not only does Kubernetes easily scale applications, but even helps scale IT operations teams. Its use of Kubernetes is all about “decoupling the operations of [engineering] teams at an organization, and giving them a platform to manage their own large, complicated distributed systems as easily as I can manage my Linux box,” Comcast’s Richard Fliam said. Not only would this approach cut deployment time for apps, it also cuts the amount of time staff has to spend in documentation and the communication required across groups.

Elsewhere we found that — surprise! — even Microsoft is using Kubernetes, which it needed to quickly road-test the then upcoming release of a version of SQL Server 2017 that was ported to Linux . Originally, it would take Microsoft an entire night to run 700-800 tests of the containerized SQL Server. With Kubernetes, however, the time needed to complete those tests shrank to a few hours.

This Week in Numbers: Java vs. JavaScript 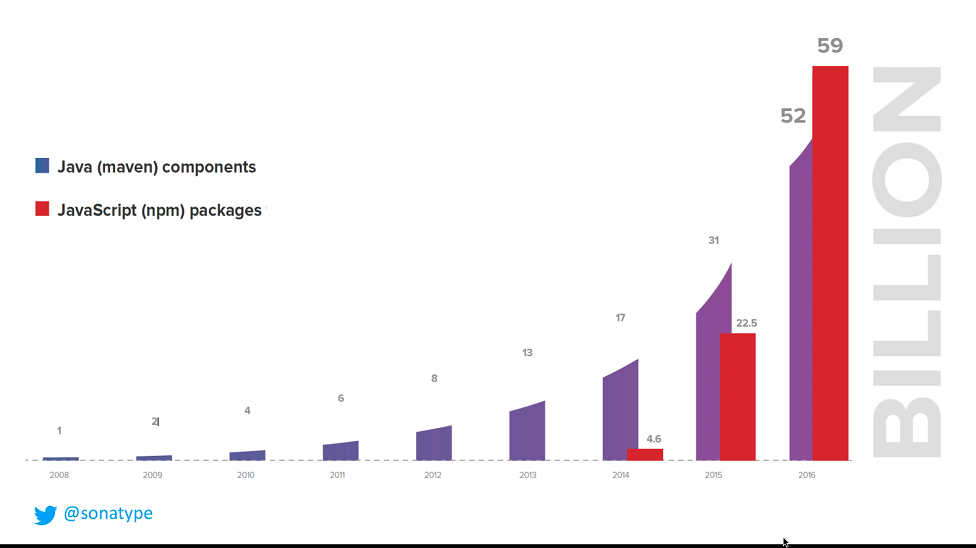 With Node.js’s use on the server-side, comparing JavaScript and Java is no longer apples vs oranges. With that context, it is noteworthy that last year the number of npm (JavaScript) packages downloaded surpassed components in the maven (Java) components — ahead of Mikeal Rogers’ forecast. According to Sonatype’s 2017 State of the Software Supply Chain, 59 billion npm packages were downloaded in 2017, up 262 percent from the year before, while Java component downloads “only” rose 68 percent. The number of downloads is a function of the number of users, the total number of available to be downloaded, and frequency of software releases/updates. According to the 2017 Stack Overflow Developer Survey, the percentage of developers using Node.js has risen from 8 percent in 2013 to 26 percent in 2017.

According to Module Counts, the total number of unique Node.js modules surpassed Java in 2014 and now outpaces 3 million to 2 million. Node.js continues to grow its user base and complexity, but the continued increase in downloads per year is also related to the shortening application release cycles. Looking to the future, npm downloads per user per month will be an interesting stat to monitor.

This Week in Podcasts

The problem with the old school vendors of enterprise backup-and-recovery, aka “disaster recovery” aka “continuity of operations” is that they got the backup part OK, but the recovery process, many organizations have found, has been very difficult if not outright impossible, explained Rubrik‘s Kenny To. As explained to  Software Engineering Daily host Jeff Meyerson, Rubrik is focused on that sweet spot of Microsoft shops running a VMware infrastructure, offering an appliance (!) to back up virtual machines so they can be quickly restored. The restorations happen quickly so even if they don’t provide full performance, an organization will have something running into full operations are restored, To argued:

How much is the Kubernetes community truly dependent on Google? This was the question pondered by the Software Defined Talk crew, discussing Matt Asay’s recent essay on how Kubernetes community is dependent on Google, They all agreed that Asay, while a smart fellow, seems to be misguided here. Or he was intentionally out to write a hit piece. Sure Google still dominates the K8s code development, but not as much as it used to. “Clearly, someone needs to write the annual ‘open source is boring article, let’s stop talking about it,’” Co-host Michael Coté:

How does open source change in the cloud? This week in InApps Makers, we spoke with Apache Software Foundation co-founder Jim Jagielski about the Free Software Foundation’s Affero GPL, a version of the GPL that specifically covers cloud use of free software.

This Week in Photos

TNS out-and-about on the tech scene. 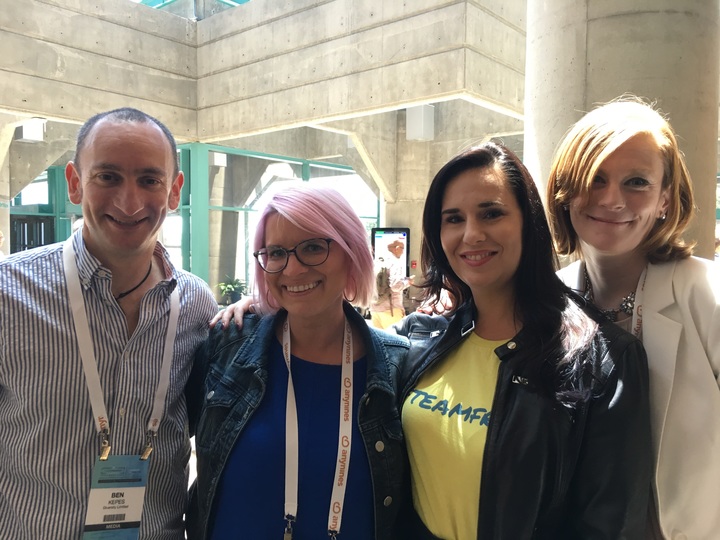 This Week in Art

The feature image above is a detail shot from Christine Vella’s “Saltbrush Dam,” an oil painting now being shown at Agora Gallery in New York ($1,700).  Vella’s abstract paintings use “the textures and colors of the Australian outback to create patterns that express the landscape’s essence,” according to the artist.

Read More:   How to Create a Bridged Network for LXD Containers – InApps Technology 2022