The latest entry in GitHub’s State of the Octoverse series was a massive undertaking based on a survey of over 12,000 developers, and separately analyzed data from 4 million repositories including many from paid GitHub Team or Enterprise Cloud accounts.

One theme that runs throughout the findings is that developers who spend most of their time doing software development for a private company’s repositories (47%) or are focused on an open source project while working for a private company (5.5%) behave differently than those other professional developers (13.5%) and students (29%) that are still engaged in the open source community.

Two-thirds (67%) of the developers surveyed said the ability to innovate without legal risk is an important priority. Yet, only 24% thought government investment in and contribution to open source is important.

In between these two public policy goals, almost half (47%) supported healthy online collaboration, and efforts to ensure that everyone has an equal opportunity to become a developer. GitHub’s analysis provides additional evidence that adding and improving on existing documentation can help developers become more productive, writing code quicker while sustaining lasting communities.

The findings build on previously peer-reviewed work, which includes the foundations of the popular DORA metrics. However, we can’t specifically quantify a lot of the conclusions from the report. In the spirit of open science, we encourage GitHub to release the survey data to the public so researchers can attempt to replicate and test, so the world can further the understanding of the developer universe. With that caveat, here are some takeaways: 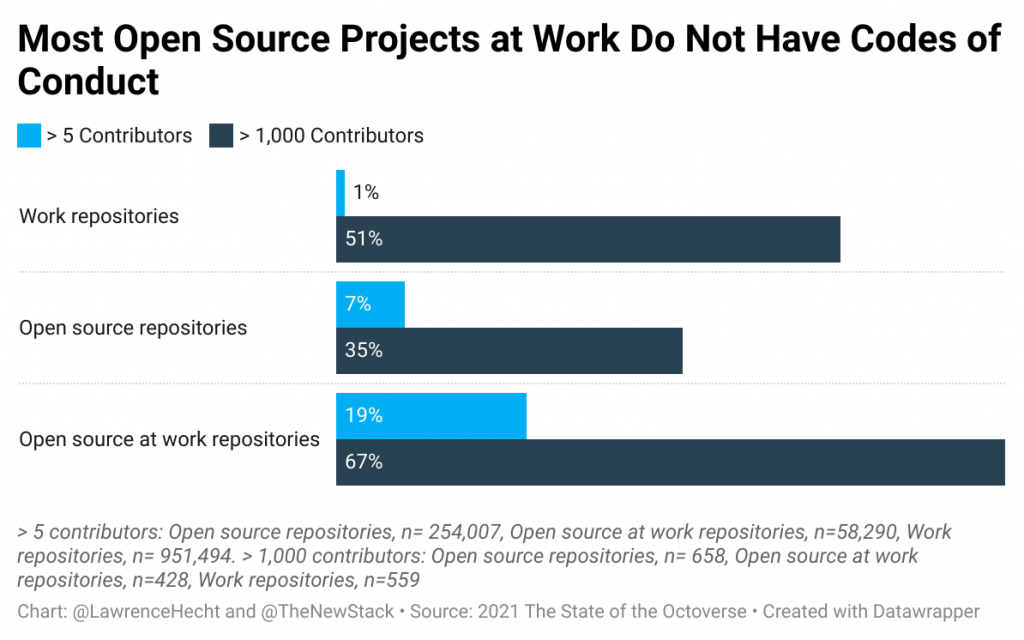 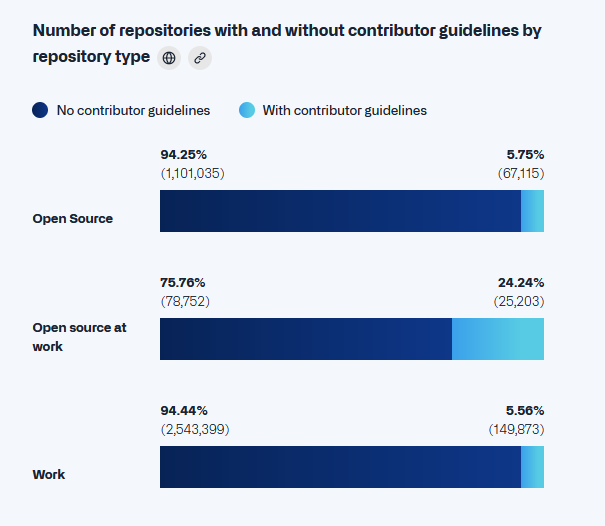 Source: The 2021 State of the Octoverse 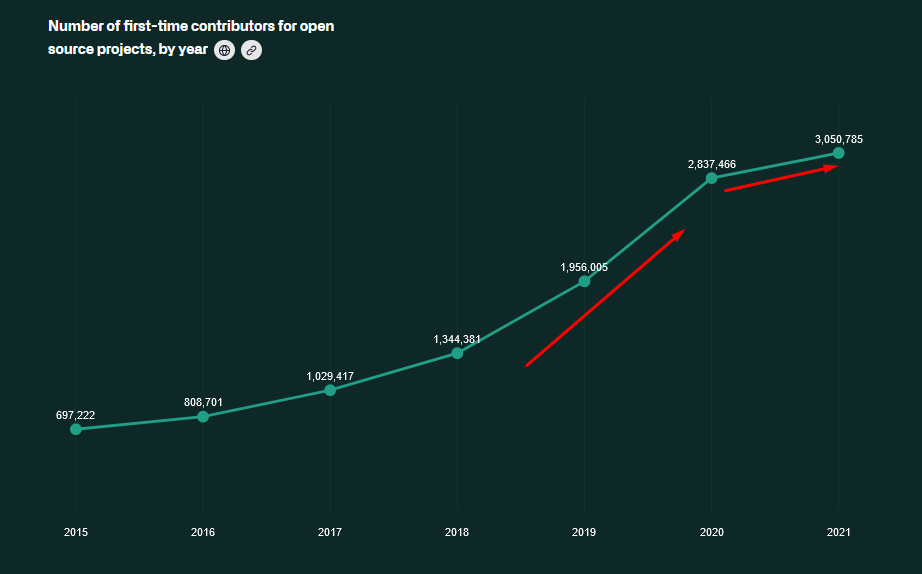 Source: The 2021 State of the Octoverse. In 2020, the number of new contributors to open source projects increased 45% to 2.8M. In 2021, the net increase was only 8%, but that still means that over 3 million people contributed to an open source project.

Mentioned earlier in the article, SlashData’s 21st State of the Developer Nation Report shows adoption of different programming languages has changed over time. GitHub’s report publishes at least one similar-looking chart, but their data did not come from the survey results.

Read More:   What It Takes to Become a Senior Engineer – InApps 2022

Over the last six months, JavaScript and Dart were the only major programming languages saw significant growth in terms of both in terms of sheer size and proportion of developers worldwide according to our analysis of SlashData’s 21st State of the Developer Nation Report. If we compare the survey data versus the same time last year (Q3 2020), then the number of Rust developers rose 38%, but as a proportion of all developers worldwide, Rust accounts for only 4.1%, down from 5.4% in Q1 2021. While this goes against what conventional wisdom predicts, another large-scale survey also found a recent drop in Rust adoption. Deployment of actual Rust code continues to rise, so these may be blips in survey data. Or, it is possible that there will be a renewed round of adoption now that the Rust Foundation has reinvigorated leadership.

SlashData’s original reports published findings based on the number of developers that use each language, not the percentage of developers worldwide that use each language. The difference is important because the number of developers continues to grow. While the size of the total market may increase all the time, that does not mean a language/technology’s position or rank changes. Sometimes these things matter in terms of vanity metrics, other times they’re applicable to financial analysis. Just something to pay attention to. 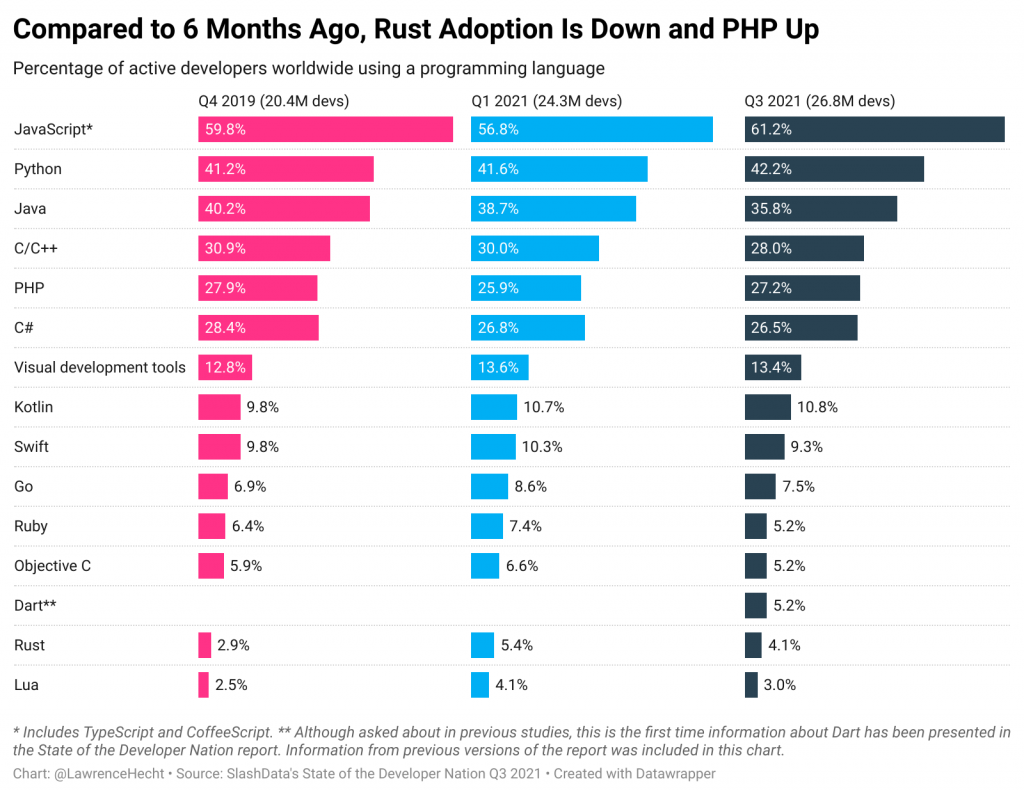