The Challenges of Making Video Games for Cats – InApps 2022

“Cats are this misunderstood market of untouched gamers…” says developer Willem Deventhal in an interview with the Pocket Gamer Biz site. But as he blazes new frontiers in where data will be gathered —and how it can be used — is it a testament to our human ingenuity…or just to our hubris?

One thing’s clear. His untold story offers a startlingly fresh perspective on the hopes and dreams of young developers today…

“Do you ever feel bad about leaving your cats alone?” asks Google’s Play Store page for Mew and Me, answering “So do we!”

But there’s an app for that — and it can run all day on a tablet or smartphone. “They are the only games intended to be left on when you are out of the house,” explains the Mew and Me website, “and the first games that track your pet’s usage to show you what they have been up to!”

At the Game Developer’s Conference, Deventhal got a laugh when he showed the audience his very first “user tester” — his cat Fez. “He is, to this day, one of the least-engaged cats that I have ever tested with.” 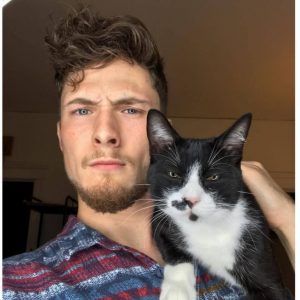 For nearly four years, Willem was a software engineer for the brain-training app company Lumosity. “On August 3rd, 2018, I walked out of the doors of a very comfortable job to start my own business.”

Willem tells me the genesis was a weekend geek project to create home-made toys for his cat Fez. “Basically, I took some cheap electric cat toys from Amazon and soldered wires into them so they would run from wall power. Then I got a smart plug that I could control remotely… and BAM, I had smart cat toys.”

“Fez really liked them at first,” Willem tells me, but “he got bored of them rather quickly. This is one of the reasons I switched to games. I can deliver new and varied game experiences over time, rather than having a piece of hardware that never changes!”

So he started creating games that run on tablets that might appeal to cats.

He’d performed “user testing” — at Cat Cafes, of course — but discovered that cats even seemed to disagree on which games they liked. Soon he’d even learned that cats are semi-color blind and have poor vision up close.

But he now has a clear answer when someone asks if adult cats are better at the games than kittens. “No… We find that pretty universally, adult cats at best are going to sit and watch.”

“My guess there is something to do with plasticity. That basically that cats pretty much establish their personality by, like, one and a half years in, and so if they haven’t experienced a tablet and ‘this is a fun toy’ within a year and a half, it probably just doesn’t get learned later in life.”

So where does the experimentation end? “Have you tried it with big cats?”

Of course, the best part of his presentation was just footage of cats playing the finished games.

But in the end, there’s only so much a developer can do. Deventhal tells the Los Angeles Times that 30% of young cats will play with the game. Or 50% — if their owner prods them to.

But when it works, it’s wonderful. “We’ve had a number of people say that their cats are now in love with their tablets,” Willem tells me, “and whenever the human tries to use it, the cat interrupts them!” (Though of course, some cats do that anyway…)

But has anybody ever complained that their cat scratched the screen on their iPad?

“Actually no! We always recommend people get screen protectors and a good case, but it seems most cats don’t break most tablets.”

What if there’s more than one cat? Do they fight over who gets to chase the virtual prey?

“Cats seem to play together very well! I’ve never seen aggressive behavior as a result of the tablets. Usually, multiple cats will sit and watch while one attacks!”

Willem is part of a core team that includes co-founder Olivia Dudo and two board members (Frank Connolly and Donna Morton). And in response to the pandemic, all of the games are now free. With 10 reviews in the Android play store, It’s averaging 4.6 stars. (Though one three-star review complained “There should be an option to turn down the number of bugs in the bug game since I’m using it on a phone and the bug pretty much cover the screen and my cats are overwhelmed”)

One five-star review gushed “My kitten absolutely loves this… It really keeps him enthralled.”

The Times game critic, Todd Martens, tried it with his 8-year-old cat Sleater. The result? “She wasn’t into it.”

Mew and Me is not the only company sharing personal technology with pets. New York’s “School for the Dogs” offers a $300 class that trains your dog with your iPad or iPhone “to help dogs learn how to differentiate between shapes, colors and numbers using touch screen devices.” (It’ll also help you decide whether dogs prefer poking the screen with their nose or paw.)

Read More:   What If All Frontend Developers Were Jamstack Developers? – InApps 2022 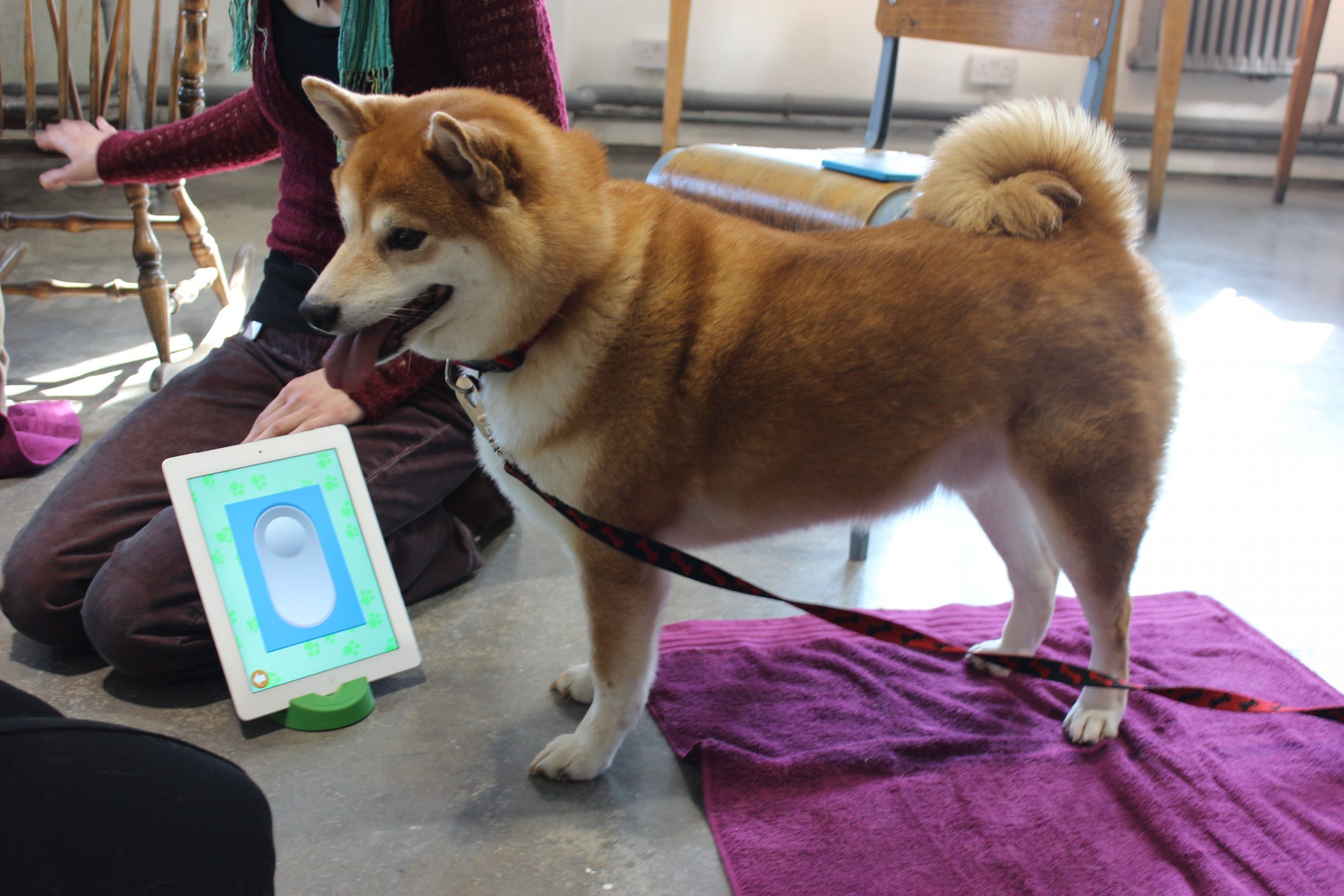 But Mew and Me has larger ambitions. “We see ourselves becoming the smart pet marketplace of the world,” says their web site, teasing plans for cat games that you control remotely and “physical” toys (for both cats and dogs.) The Times also reports he hopes to create a larger lifestyle brand (for cats).

But what about the data? The Mew and Me website describes the company as “The first group to focus on pet behavioral data on a grand scale,” promising “we put your pet’s data at your fingertips, giving you a new way to understand them.” (Though much of that data is where your cat’s paw contacted the screen.) “We are closing in on 300,000 individual cat taps!” Willem tells me. “Every time the cat touches one of our devices, we record a single, ‘response.’

“This response has all of the information about that tap, from what time it happened to what color was under the cat’s paw to what game they were playing.”

The website also shares their philosophy of using this cat data “in a conscious way.” Willem tries to explain it to me:

We want to build empathy for our feline friends! Step one in doing that is just giving our users interesting information about their cat that they didn’t have before. Such as their play schedule, or their Cat Purrsonality, a trademarked Mew and Me design. These tidbits slowly shift the human from thinking about their pet as just a pet to thinking about their pet as another being in the home, with thoughts and feelings and emotions. We are building empathy, and therefore helping the world.

The “Mew and Me” website talks about “giving you a window into their day that you wouldn’t have had before.”

On his Twitter profile, Delventhal describes himself as a “Level 2 Love Warrior.”

Er, okay, but do we learn anything about cats?

We can learn all kinds of things! We have barely scratched the surface. We can get the cat’s schedule, what sorts of stimuli excite them, their estimated levels of things like anxiety, their general comfort in a space, and more!

But looking to the future, Willem’s ambitions are even greater. “We are partnering with scientific organizations to study our data and cat kind. We have already launched our first scientific study, being run by a board-certified vet behaviorist!”

The Times’ article drew an interesting response on Twitter from a woman with a Ph.D. in animal computer interaction. “We should be really careful about what kind of tech we give to our animals,” wrote Patricia Pons, adding “not everything that seems to distract them is good, and there are so many ethological and well-being implications… And overall, it should be supported by quality research.”

Also weighing in was Dirk van der Linden, who tells me he’s part of a research group analyzing data from animal behavior experiments (as well as animal welfare monitoring “and other applications of AI and Data Science to animal data.”)

One of their recent papers summarizes a body of research that’s surprisingly rich. (“Wirman et al discuss the challenges of the design of touchscreen-based games for orangutans…”) One Rome-based dog trainer even told the researchers she’s using tablets to develop the cognitive abilities of puppies she’s raising to be service dogs.

van der Linden tells me they’d actually delved into how pet owners felt about pets playing with tablets. They had 276 people watch videos of dogs interacting with tablets and describe the behavior. (Although at least some of them answered, “I am not sure what the dog is doing.”) Some worried the dogs were frustrated or over-excited or worried that the screens might be harmful for the dog’s eyes. Some used the word “unnatural.”

Though their research focused on dogs, “The preliminary results from that research show that, in the context of pets playing games on tablets, owners perceive their pets to be hunting, digging, or exhibiting other behaviors just as much as actually considering them ‘playing.’”

“In fact, many pet owners held quite negative views on whether these interactions (whether they are play or something else) were beneficial to their pet,” van der Linden tells me. (Though the paper warns later that “pre-existing opinions on dog-tablet interaction may impact one’s judgment.”)

To be fair, the research paper also posits tablets could give dogs exercise and cognitive stimulation — but van der Linden says that’s not the whole picture. “What we concluded on the basis of this, is ‘Playful interactions of animals with technology have potential dangers, and as our exploratory findings have shown, the opinions of pet owners and professionals on these interactions are mixed.’”

I ask Willem if there’s any academic research showing cats benefit from playing video games. But apparently, no one’s actually studied the question. “That’s why we are doing this!”

For now, we have consulted with two different vet behaviorists, Dr. Mikel Delgado and Dr. Karen Sueda, on the subject. They both suggested our app was much like having another window in the home. At worst, the cat has something new to look at in their environment. At best, the cat has a new, interactive, mentally stimulating experience!

He tells Pocket Gamer Biz it’s now registered as a California Public Benefits Corporation. “We track everything that your pet is doing, and in partnership with scientific organizations, actually, study cat behavior. We are already one of the largest cat behavioral data centers in the world, and have dreams of using that data to uplift our country and our planet.

“There is this beautiful quote by Denny Scott that we all believe in: ‘The measure of a civilization is how it treats its weakest members.’”