In the world of computational science, Stephen Wolfram is one of our most prolific thinkers. After a lifetime of letting his brain run wild over a wide variety of topics, this month he’s released a new collection of his mind-expanding essays, the aptly-titled “Adventures of a Computational Explorer.” 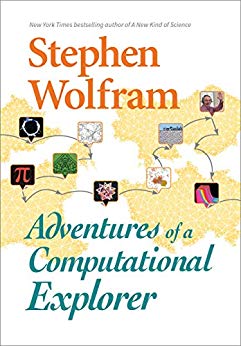 More than one essay in the book touches on the tantalizing question of how one would communicate with an alien civilization — whether it’s through left-behind beacons or in an actual conversation, and even if the alien lifeform is man-made. But it’s all ultimately a chance to enjoy watching a great mind in action one more time — and to maybe even find some inspiration.

“If there’s one thing that I hope comes through from the pieces in this book it’s how much fun it can be to figure things out,” Wolfram writes in the book’s preface, “and to dive deep into understanding particular topics and questions.”

A Life of Investigation

Wolfram received his Ph.D. in physics from Caltech at the age of 20 — then received a “genius grant” from the MacArthur Fellowship program when he was 21. He spent the next decade working with Nobel prize-winning physicist Richard Feynman on early parallel-processing computers in the 1980s, eventually helping apply it toward simulating physical processes like fluid dynamics.

When 26-year-old Wolfram considered starting his own research institute, Feynman had advised him against it. He warned that Wolfram would end up administrating things, and that he’d struggle with tolerating “ordinary people” and treating their foibles “with tolerance or patience…

But within two years, Wolfram had founded Wolfram Research, and soon it had released the Wolfram Mathematica system for technical computing, which today has nearly 5,000 built-in functions. (And, its web page explains, is now “seamlessly available in the cloud through any web browser.”)

Read More:   How the NFL Scored a User-Interface Touchdown with React and Node.js – InApps Technology 2022

In 2002, Wolfram Media published the groundbreaking “A New Kind of Science,” articulating one of his foundational beliefs, that, while for centuries we’ve described real-world phenomenon using relatively simple math equations, there is “no reason to think that systems like that we see in nature should follow only such traditional mathematical rules,” he wrote.

Instead, Wolfram writes, he’d seen simple computer programs produce complicated behaviors, and believes it could fill a gap in the world of science. “[B]y thinking in terms of programs the new kind of science that I develop in this book is for the first time able to make meaningful statements about even immensely complex behavior.”

Talking to the Aliens

The new book that approaches the same themes from a different angle. “It’s remarkable how often the computational paradigm — and my way of thinking about it — ends up providing a new and different insight, or an unexpected way forward,” he writes.

The book’s first chapter is “Quick, How Might the Alien Spacecraft Work?” which describes Wolfram’s work on the 2016 science fiction movie “Arrival.” Wolfram remembers being asked by the film-makers to read their script, leading him to get involved “and personally try to give it the best science I could.”

Soon Wolfram finds himself talking to the film’s stars, Jeremy Renner and Amy Adams, on heady topics like quantum mechanics or how our language affects our thoughts. He writes that working on the film was a fun challenge — although “in the end, I basically had just one evening to invent how interstellar space travel might work.”

So he posited that space is a network of nodes, some with surprisingly long-range connections (for example, from quantum entanglement) that could ultimately offer wormhole-like mechanisms to a visiting alien spaceship.

“Obviously all these physics details weren’t directly needed in the movie. But thinking them through was really useful in making consistent suggestions about the script,” he wrote. Wolfram was also asked to create some appropriately-complicated physics equations to appear on a whiteboard in the background of one scene. And in the essay, he explains how each of his 24 scribbles really does correspond to an actual theory one might form about an alien spaceship. (“Maybe the spacecraft has its strange rattleback-like shape because it spins as it travels, generating gravitational waves in spacetime in the process…”)

The fun didn’t stop there. Wolfram brought his son Christopher to the set, and he ultimately wrote much of the alien computer code that appears in the movie.

He noted proudly that in the movie there’s at least one shot showing a Wolfram Language notebook “with rather elegant Wolfram Language code in it. And, yes, those lines of code actually do the transformation that’s in the notebook. It’s real stuff, with real computations being done.”

The experience also gave Wolfram a chance to re-visit the question of whether mathematics is universal — enough so that you could use it to begin a conversation with aliens. Of course, he consults the computational universe of possible programs in “A New Kind of Science,” concluding that besides math, there’s “an infinite diversity of other abstract collections of rules” — many of which would be good for producing technology. He considers the universality of concepts like 2D geometrical figures, logic theorems, and cellular automata. But he notes that you’ve still got to reach a point where you’re asking the aliens, “What are your intentions on earth?”

At one point he and his son devised a list of 18 possible answers that an alien might give to the question. The answers range from “tourism” to “evangelism,” but he calls the problem “strangely analogous” to the question of how we’d communicate with an artificially intelligence — and then shares his own insight. “One of the things that’s emerged from basic science I’ve done is that there isn’t really a bright line between the ‘intelligent’ and the merely ‘computational’.”

And fortunately, Wolfram has also done some work in that area too, plugging away on a symbolic discourse language.”

There’s also a section comparing movie-making to releasing a new version of the Wolfram programming language. He wrote at one point that watching the finished movie, “the results reminded me quite a lot of the process of software design I’ve done so many times — cut out any complexity one can, and make everything as clear and minimal as possible.”

“In some ways, I think movie-makers have it easier than us software developers. After all, they just have to make one thing that people can watch,” he wrote. “In software — and particularly in language design — we have to make something that different people can use in an infinite diversity of different ways, including ones we can’t directly foresee.

“Of course, in software you always get to make new versions that incrementally improve things; in movies, you just get one shot… But somehow there are always things to do that nobody expected, and it takes a lot of energy, focus and pushing to get them all together.”

Working on the movie was a stimulating experience, Wolfram wrote. And he jokes that if aliens ever do arrive on earth, it’s also made him “a little more prepared.”

The book also includes a nod to a 2007 blog post about Wolfram’s search for the fundamental laws of physics — and the question of whether it’s possible to pinpoint our own world within that vast universe of all possible rules. (“I think it’d be embarrassing if our universe is out there, findable by today’s technology, and we didn’t even try…”)

Interestingly, that 2007 blog post had also included his idea of space as a network of nodes — though it then moves on to questions about time, general relativity, and quantum mechanics. But as always, it seems to point back to his work on the Mathematica system. “Universe hunting is a very technology-intensive business. Over the years, I’ve gradually been building up the technology I think is needed — and quite a bit of it is showing up in strange corners of Mathematica.” And while it may be a long time before there’s conclusive results, “universe hunting is a good hobby.”