Cloud monitoring provider Thundra has extended its platform by offering a plugin to debug and make fixes remotely for application code without disrupting application execution times.

While Thundra previously allowed for monitoring and debugging applications and microservices, Thundra’s Sidekick plugin goes further by allowing for hotfixes to be implemented directly to live code. Developers can thus rely on Thundra to diagnose application-performance issues and then use Thundra Sidekick with the Java integrated development environment IntelliJ IDEA to add and view tracepoints to the problem code without affecting the code execution. Fixes can then be implemented and uploaded without having to redeploy the application.

“After successfully helping the community to troubleshoot production issues, we also understood that we hit the tip of the iceberg in developers’ pains,” Serkan Ozal, founder and Chief Technology Officer for Thundra, said. “Thundra Sidekick helps to find and fix bigger problems that were previously hidden.”

This new plugin works for any Java application and any Spring application. Provided that the runtime is Java, it can work on Amazon Web Services, Microsoft Azure, and Google Cloud. It also works on containerized applications and Kubernetes.

Ozal described how monitoring systems  “has had and still has its unique challenges,” in need of alternatives for monitoring and fixing problems without impeding the execution times of applications functions. At the same time, Ozal noted how applications built today are increasingly created with the use of third-party services, such as DynamoDB and SQS, online retail services, including Twilio and Stripe, and services that in-house DevOps team members provide in support of application development and operations management.

The Thundra monitoring and debugging platform allows developers, through an IDE, to pause and relay code in separate test environments during the debugging process. This is done with its tracing capabilities through the use of traces, metrics and logs.

In a demo, Thundra demonstrated a sample incident, involving problems an end user was having scheduling appointments. Thundra Sidekick debugging process first involved setting and initiating tracepoints to reveal the issues in the code. The problem code was then replaced in the cloud environment with a hotfix. 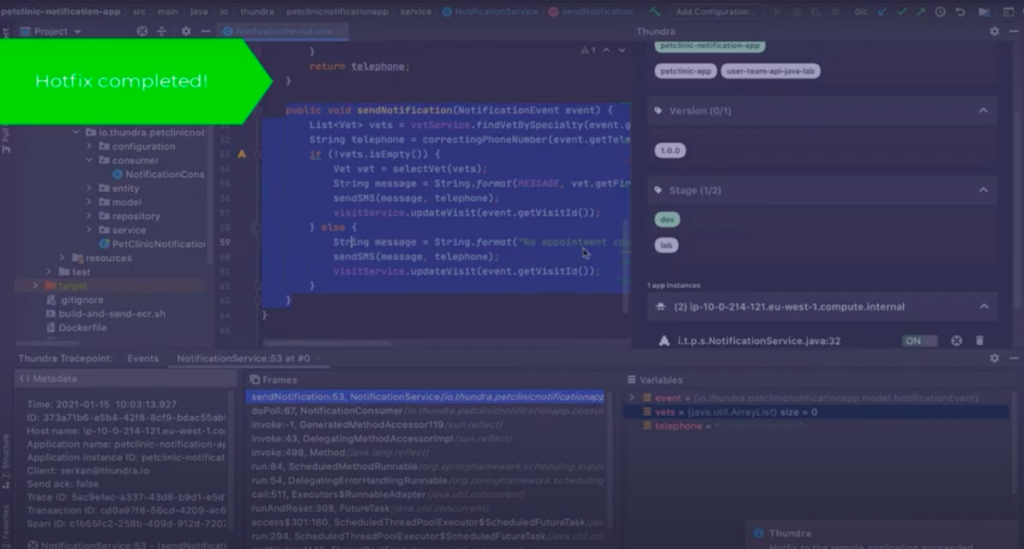 However, Ozal noted how the process of debugging applications in remote environments is typically “arduous” and is often lacking when “setting breakpoints for remote applications like you would do in a local environment.” “Remote development lacks debugging tools on distributed environments,” Ozal said. “This challenge revealed the opportunity to tap into Thundra’s technology to best fit the developer’s pre-production needs while working on microservices.”

Snapshotting: Thundra Sidekick takes a snapshot of the variable and the call stack when the code execution hits the tracepoint with all valuable data retrieved with negligible (< 1ms) performance overhead.