After reading our post on vulnerability scanning services, GitLab CEO Sid Sijbrandij asked us, “So GitHub is growing, GitLab is growing even faster, and GitLab and BitBucket are shrinking? …. What could explain that?” He wanted to know why SmartBear’s study found that companies are increasingly paying to use one of these code repositories, but our study only saw an increase for GitHub. Here is our explanation.

Public-facing open source projects may be just the tip of an iceberg; much of GitLab’s growth may be related to the management of internal projects and its full suite of offerings. Furthermore, the drop from 30% to 27% was relatively small and did not distinguish between which non-GitHub companies are being used. Luckily, JetBrains’ State of the Developer Ecosystem reports provide more detail. This study asked about the adoption of “source code collaboration tools” and “version control systems”, and then looked at which specific “version control services” are used. At least in this study, Git was almost universally used to some extent, with a source collaboration tool being used 84% of the time. GitHub barely changed, GitLab rose from 33% to 38%, and Bitbucket dropped from 41% to 32% as a version control service used regularly. GitLab appears to be gaining at Bitbucket’s expense, but the JetBrains data does not tell us if this is coming from paying customers versus users of its free version. 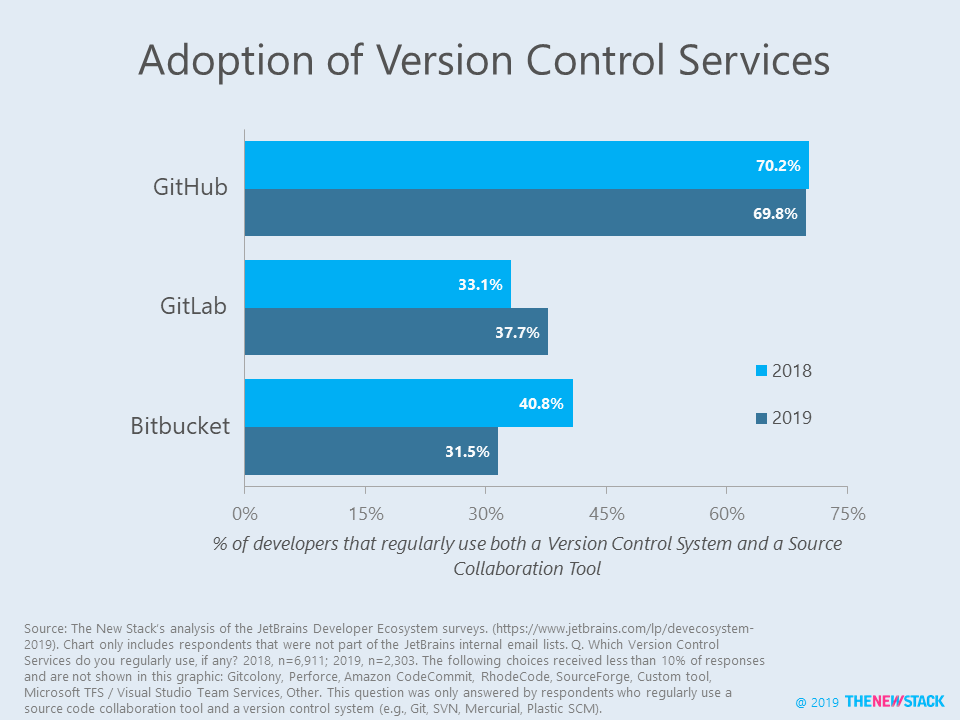 When comparing the multiple studies, we believe SmartBear’s findings likely overstated the degree to which Git usage grew. Its 2019 study reported that 74% of companies used Git for software configuration management (SCM), up from 55% in 2018. The question choices align with what is also commonly known as source code management. Although it is obvious that Git has become the predominant version control system, we are skeptical that it saw a 35% yearly increase. Digging into the SmartBear sample, we found that its latest survey saw a jump in respondents from companies with 100 or fewer employees, going from 31% in 2018 to 44% in 2019.

Everyone would benefit if vendors and analysts could agree on common definitions for technologies and markets. For example, peer review site G2 has five different components to its source code management category: 1) peer code review, 2) static code analysis, 3) version control clients, 4) version control hosting, and 5) version control systems. In the meantime, let us know what buckets you place these products in.