You can find content about U.S. Unemployment Surge Highlights Dire Need for COBOL Skills – InApps from the Wikipedia website

Faced with high volumes of unemployment insurance claims, state computer systems across the country are facing technical difficulties. Unfortunately, these systems are often running on old mainframes and rely on a programming language, COBOL, that is sixty years old. Faced with dramatic increases in volume, the systems have been failing and need technical support.

The need has become so dire that along with healthcare workers, New Jersey Governor Phil Murphy is now asking for volunteers with COBOL skills. New Jersey’s 40-year-old mainframe benefits system was besieged by a 1,600% increase in usage, as over 371,000 people have filed claims in the past month.

The governor focused on addressing the current emergency but exasperatedly asked why these critical systems rely on COBOL. There is no reason to wait for a post-mortem. The reason is that most states have continually delayed necessary multiyear projects that still would not totally eliminate reliance on a programming language that is no longer taught at most universities.

Just because something is ancient doesn’t mean it should be euthanized. In fact, the most common approach towards COBOL applications is modernization, not retirement according to an ongoing survey of over 500 people involved with COBOL systems being conducted by Micro Focus and Vanson Bourne. Sixty-three percent of participants are in the process of modernizing these applications and 36% are replacing them. These applications are being updated with new functionality, re-platformed and moved to cloud environment, and even moved to new mainframe systems. Unfortunately, as explained in Tom’s Hardware, many state unemployment systems are not legacy systems that have already been re-factored. 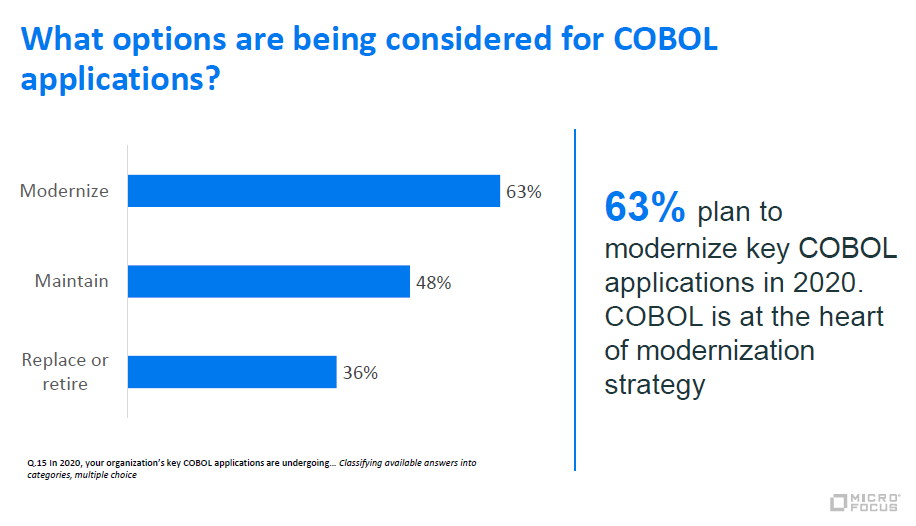 Almost all (92%) of the aforementioned survey believe their organization’s COBOL applications are strategic. Many non-critical systems have been switched out with applications that rely on modern languages that are actually taught to young developers. What has remained have often not been touched because their replacement often entails a lot of money and a multiyear process. As reported by The New York Times, last year New York State awarded India’s Tata Consultancy Services (TCS) a $56 million, five-year contract to modernize its COBOL-based unemployment system. Although TCS may employ Americans to manage this contract, it is unlikely to be utilizing Americans because the average COBOL developer in the United States made $106,194 a year in 2019, which was 10% more than the year before according to a recent Dice survey.

Public health systems in the US were not ignored over the last 10-20 years. Neither were the computer systems powering many state unemployment systems. In both cases, public servants have repeatedly proposed updates that were never prioritized. Why do we need to wait for a rainstorm to fix our leaky roofs?