Earlier this week, GitLab acquired Gitter, a chat and networking platform with over 800,000 users and 300,000 communities. GitLab’s blog post explained that the merger is part of GitLab’s overall strategic plan. But you might be wondering what this means for you as a user of Gitter or a contributor to GitLab. Turns out, not much.

“The product [Gitter] will be the same. More time will probably be spent managing and reviewing community contributions over development, though,” commented Eric Eastwood in the Gitter HQ community, where there was a lot of discussion about the acquisition. Eastwood is an employee of Gitter, now of GitLab.

There will be two major changes. Starting immediately, private conversations are now free. But the biggest change is that GitLab is going to open source Gitter, which is targeted for June of this year. 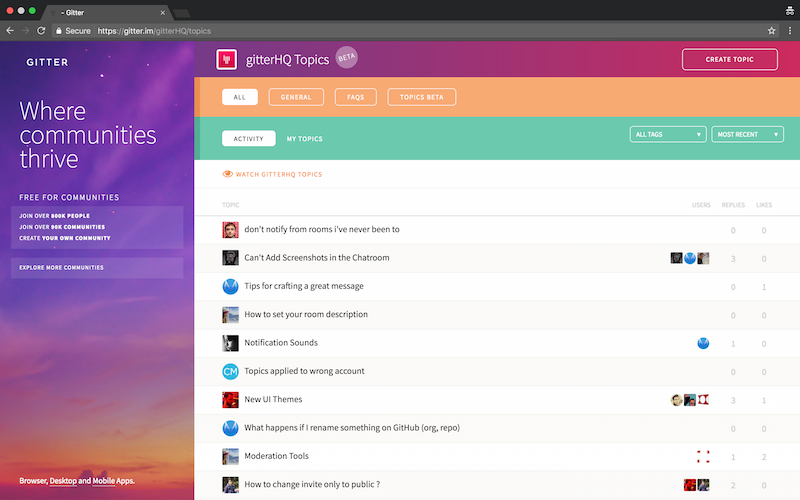 Gitter is unique, said Tim Anglade, vice president of marketing at GitLab because it is designed for conversation and collaboration around software development. “That’s very much a goal at GitLab.”

GitLab will keep Gitter’s planned roadmap for pushing the new features, said Anglade. One planned feature is called Topics, which will allow for asynchronous conversations, more like Stack Overflow where people can ask questions and people can collaborate on an answer. The development is looking to finish this feature and ship it as soon as possible.

When you deploy the GitLab, it will still be bundled with GitLab’s own chat client Mattermost, which bills itself as the “open source, private cloud Slack alternative.” Mattermost is focused on internal team conversations, which works best inside GitLab, explained Anglade.

Gitter is doing amazing work, it is a very visible product used by a lot of people, he said. GitLab believes in supporting that, but the goal was not to have them become a key part of the GitLab product. GitLab will continue to have integration between Slack and Gitter once Gitter goes open source in June.

GitLab also has close integration with the popular Slack messaging service. StackShare has this handy comparison of the GitLab, Gitter and Slack.

“Slack is certainly a great product, but has limitations for large communities and public usage,” GitHub’s announcement of the acquisition read. “All of Gitter’s public conversation history is completely unlimited, open, archived and indexed by popular search engines, contributing the public knowledge base of the internet.”

“We believe in letting people use the tool they want,” Anglade said.

So GitLab purchases Gitter when it is already bundling another chat service and is integrated with yet another one (Slack), but commits to open sourcing it and maintaining its vision, and removes a revenue stream? What’s the point? 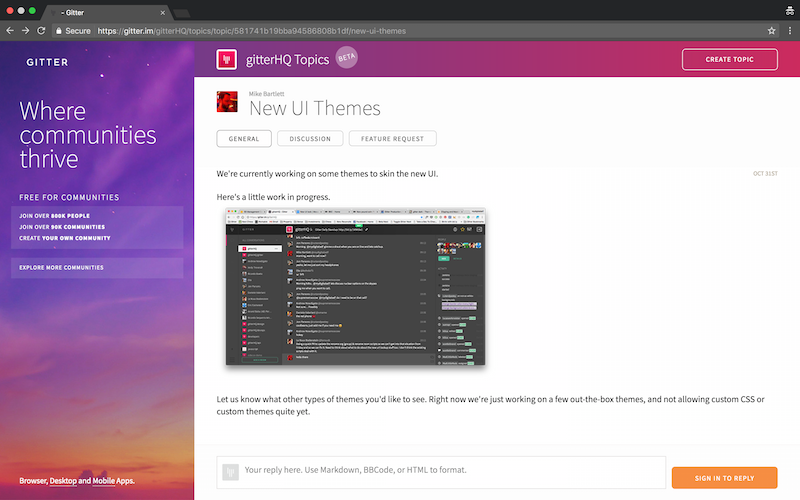 The goal was never to have Gitter become a key part of our product, said Anglade. Nor was it acquired for the revenue stream. Nonetheless, the acquisition will benefit GitLab in the long term, he argued.

“We want to be the place where open source development happens. We know we have a long way to go, but by supporting and growing community places and hangouts like Gitter, that this is a helpful step towards that goal,” he said. “This is more aligned with our goal to be the place where everyone can contribute.”

Gitter user Noah Andrews commented on the Gitter HQ Community thread, which was almost universally positive: “It’s not often you see an acquisition that results in the open sourcing of the acquired product, continued maintenance of that product, and all functionality made free.”

Anglade said, “We absolutely believe this will have a huge impact on using GitLab and our customers in the long run.”