Read more about What is Scala used for? at Wikipedia

Scala is a general-purpose, object-oriented programming language. It provides support to functional programming. It also helps in avoiding bugs in complex applications. In this article, you get to know about Scala and what is Scala used for?

Scala is a programming language invented in the year 2003 by Mr. Martin Odersky and his team. Scala released publicly in 2004 on the Java platform. The name Scala is a blend of scalable and languages. That signifies it designed to grow with the demands of its users.

Scala runs on the Java Platform(JVM). So it is compatible with all the existing Java programs. Even its compatibility with JAVA makes it well-suited to Android development. Because Android applications typically write in Java and translate from Java bytecode into Dalvik bytecode when packaged.

Let’s talk about some Scala compilers:

What is Scala Used for?

Scala has the capability to interpolate with the existing Java code and libraries. It is mainly a static type language. There is no concept of primitive type data in Scala. It is a multi-paradigm language that supports multi-core architecture. The main uses of Scala are described below. 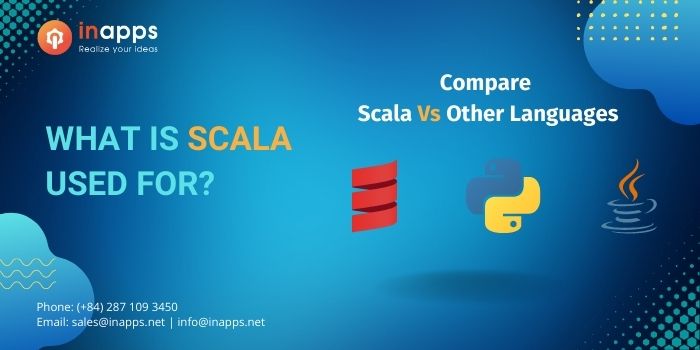 What is Scala used for?

Scala feels dynamic but it is strongly statically language. It provides type interface for variables and functions. A statically typed language avoids the mistake in code and also helps programmers to write proper code and debug code easily. But in dynamic languages, errors are visible only when you run a program.

Method dup is parameterized with type T and value parameters x: T and n: Int. Scala type system automatically infers the type of the parameter according to the value.

Scala was developed with the intention of creating new innovations in programming language research to mainstream languages like Java. This language already has some best practices and patterns that are built in the language. It also offers to adopt new languages like Python, Ruby, etc to implement functional programming.

Pattern matching lets check a value against a pattern. You can use this in place of a switch statement or a series of if-else statements in Java.

Scala is inherently more expressive than Java. One who learns Scala after Java finds it easier as well as interesting. Let understand it by this example:-

Scala supports both kinds of programming object-oriented programming as well as functional programming. you can easily explore both sides of functional and OOP together. You are able to define different types associated with both data attributes and behavioral attributes. Scala functions allow you to pass values and also supports anonymous functions.

The interoperability feature of Java is one of the best options in Scala. This enables Scala developers to use all libraries of Java directly from Scala code. It is also possible to call Scala code from Java and the user can easily write any part of a program in Scala and rest in Java.

The main use of scala is better growth and job. Scala will help to increase your demand and will make you even more marketable. Many companies like Twitter, LinkedIn, Foursquare, etc are using Scala.

Scala provides various libraries that can be used to build many frameworks. There are already many frameworks that have come to existence like Lift and Play. Akka is another Scala-based framework. IT is concurrent and established like a toolkit.

Scala has a very precise syntax as compared to Java. Java has very long syntax. Scala’s, this feature makes it more readable and concise. ScalaC can generate and work for better code.

How to write Scala programs

Here I am giving you a small example of how you can write Scala program. Firstly, you need to install Scala on your machine. And you must have to install jdk on your machine because Scala compiler creates .class file which is byte code. Scala interpreter executes this byte code by using jvm.

In the above code, you created an object ScalaExample. It contains a main method and display message using printIn method.

By now many versions of Scala has been launched. At present Scala 2.13 is in use. Scala 3.0 will release in start of 2020. Features it will contain are:-

Scala Vs Other Languages

Scala has been in a tough fight to overthrow Java. Java has remained one of the most popular, versatile programming languages since the time it was created. Scala was introduced with the intent of addressing many of the concerns developers have with Java.
Where many programming languages trying to compete with Java have failed, Scala has succeeded.
The language, built on top of the JVM, consists:

As mention, Scala has many uses once you learn it, In the future, it will surely increase Scala developer’s value in the market. They will be able to develop new frameworks and use the dynamic feature of this language. Scala being trending largely all over the world.