Based on IT skills, business climate, digital innovation, and English proficiency, this article focuses on bringing 12 best software development countries to the forefront and highlighting their strengths. 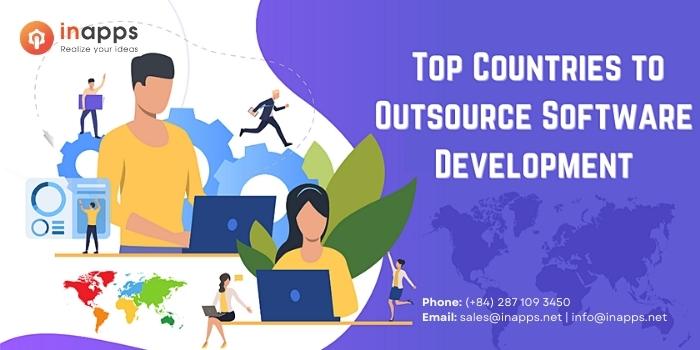 What is Outsourcing Software Development?

Outsourcing software development has become a global practice that is gaining pace as businesses realize its benefits, such as reducing development expenses, adding experience to their team, and improving product time-to-market.

Hiring a third-party vendor to assist with any software development project rather than doing them in-house is referred to as software outsourcing. Third-party contractors may work on the entire project or only a portion of it.

Selecting the best outsourcing partner necessitates solid professional management. First, you must establish a detailed project overview that includes all necessary infrastructure needs, tech stack specs, team composition, and your expected timescale. Only when you’ve determined what you’re seeking can you begin researching outsourcing locations to find the one that best meets your company’s requirements.

The Asian area contains some of the most significant software development countries globally, with certain countries placing among the top ten in the globe. Over 200 software companies employ over one million people in the region. 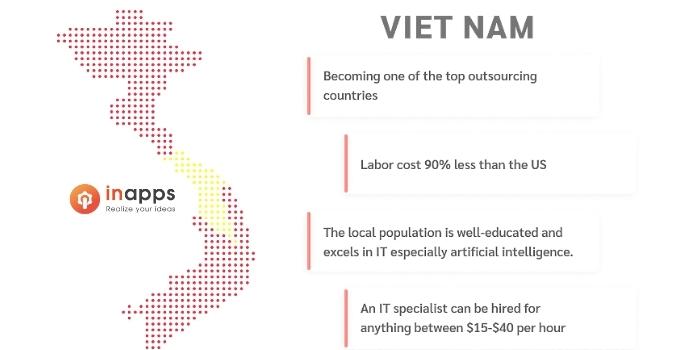 Vietnam’s economy is one of the fastest expanding in the Asia-Pacific region. The country’s transformation from low-tech manufacturing to a service-oriented economy changed it from one of the poorest countries in the world to a vibrant destination with a friendly business climate. With an average economic growth rate of 5.5 percent, Vietnam is one of just a few Asian countries capable of outpacing larger competitors such as China and India.

Aside from being a rising star among Asia’s thriving economies, Vietnam is establishing itself as a formidable outsourcing powerhouse. ITC exports worth $91.5 billion in 2020. The software business alone generated $5 billion in sales, ranking Vietnam among the top ten software outsourcing countries globally.

Vietnam is relatively new to the IT outsourcing business, having just begun approximately 20 years ago, but it is quickly becoming one of the top outsourcing nations. It has 50K information technology firms today.

The country has come a long way in terms of technology and now houses significant corporations such as IBM, Intel, Samsung, Microsoft, and Nokia.

There are legal and financial incentives for the IT workforce supported by the government.

Vietnam has been ranked among the top 50 digital nations because of its strong growth, immense talent pool, incentive packages, and significant expenditures in education. According to the Tholons Global Innovation Country Index, the country is ranked 25th. Furthermore, Hanoi and Ho Chi Minh City are ranked among the top 100 “Super Cities” with 50th and 58th spots, respectively. 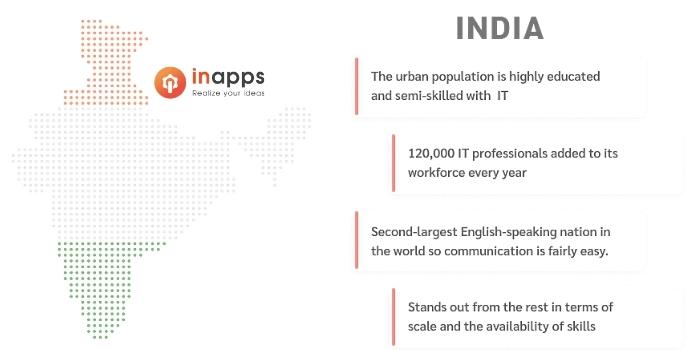 Which of the following countries is the top outsourcing destination?

With many software engineers and programmers, India is a popular outsourcing location. This is because the urban population is highly educated and semi-skilled, with the majority of its youths gravitating toward IT.

Over 120,000 IT experts are added to the country’s workforce every year. Furthermore, it is the world’s second-largest English-speaking nation, making communication very simple.

The hourly rate of software developers in India is between $10 and $15 per hour, but a developer in the United States will charge between $50 and $60 per hour. India stands out in scale and skill availability at low prices compared to other nations. 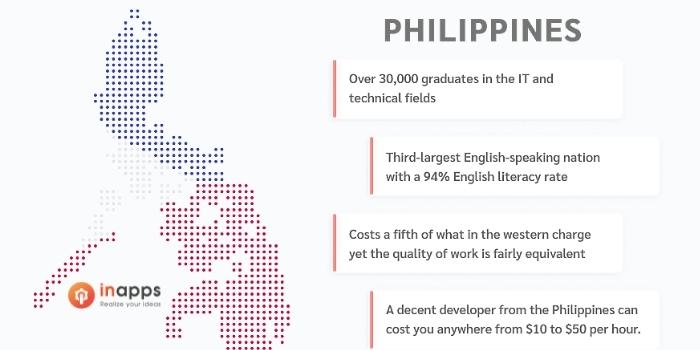 With over 30,000 graduates in the IT and technical disciplines from top technical colleges around the Philippines, the country is now ready to satisfy the expectations of emerging businesses.

The country ranks second in Asia regarding language abilities, with an average score of 562 points on the EF English Proficiency Index. English is the mother tongue of about 37K individuals, and   92% of the population speak English as a second language. As a result, the Philippines is one of the world’s largest English-speaking countries, making it perfect for outsourcing.

The Philippines is committed to research and innovation, the growth of e-services, digitalization, and extensive STEM training. These efforts eventually paid off, as the country now produces 81.5K IT graduates every year.

The country already has approximately 190,000 developers based in BPO hubs such as Manila, Cebu, Davao, and Bacolod. These cities have earned a reputation for being the finest places to outsource IT services in healthcare and fintech. Engineers in the Philippines have skills in robotic process automation and artificial intelligence solutions. However, the country lags in big data, data analytics, blockchain, and digital commerce.

With an education system that promotes Math and Science, China provides some of the world’s best technology and IT services. Many firms are establishing themselves in China to capitalize on its user interface, full-stack, mobile, enterprise, and game software.

China has taken the initiative to create, educate, assist, and teach its population to be specialists in information technology. China’s IT talent pool is vast, with over 30,000 workers with unique skill sets costing between $20 and $50 per hour. 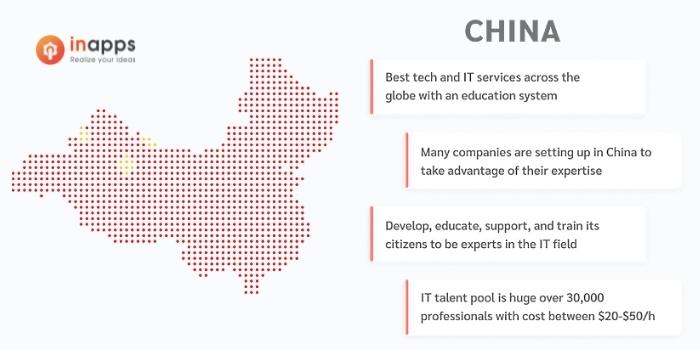 Key facts about outsourcing to China

A strong university and college system that allows citizens to hone their IT skills boosts their IT sector.

Read More:   What is the next mobile communication?

The government is attempting to increase its English proficiency to attract foreign company owners. It is currently one of the top countries for low-cost mobile application, IT consulting, and software testing services, with developers costing organizations ranging from $15 to $40 per hour. 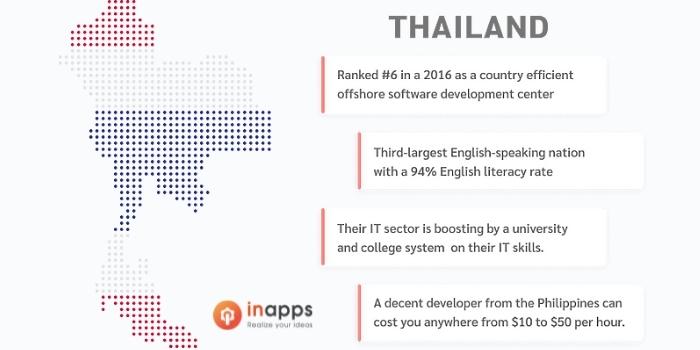 Which of the following countries is the top outsourcing destination?

Ukraine has a sizable talent pool of about 200K qualified programmers. The size of the Ukrainian tech community is expected to grow dramatically in the coming years, with nearly 23K aspiring IT specialists entering the workforce each year.

Over 3000 IT service companies focusing on e-commerce, finance, education, health, and telecom are grouped in Ukrainian tech clusters. 87% of them provide high-quality software solutions, 7% sell hardware, and the other 6 percent provide customer support. 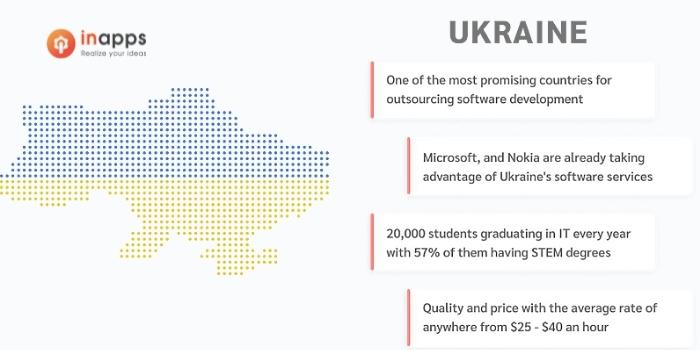 15,000 graduates from Poland’s 18 local technical colleges every year, with 80,000 students majoring in IT and IT-related subjects.

Poland is also an IT partner for over 100 businesses, with over 255 software professionals ready to provide offshore bespoke software development services. Poland’s talent pool is brimming with Java, Python, and Ruby expertise.

As a result, it is among the top Eastern European countries in terms of inexpensive programming experts who are well-versed in software development technology. In general, you may hire a software professional for roughly $40-$60 per hour. 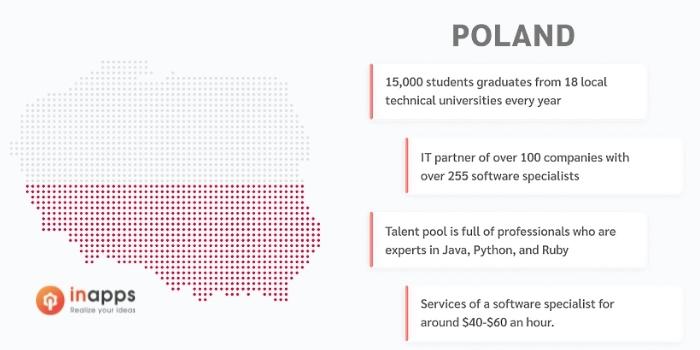 Romania is another developing destination for IT outsourcing. There are 41 technical universities in the nation, with approximately 5000 IT graduates per year.

Romania accounts for over 20% of the Central and Eastern European outsourced software development business. This country’s developers are proficient in various software processes and languages, including C, C++,.NET, Java, PHP, and Mobile. Their work may be found in some of the biggest companies in IT, including Microsoft, Dell, and IBM.

Depending on the requirements and experience of the engineer, it may cost your company from $25 to $50 per hour. 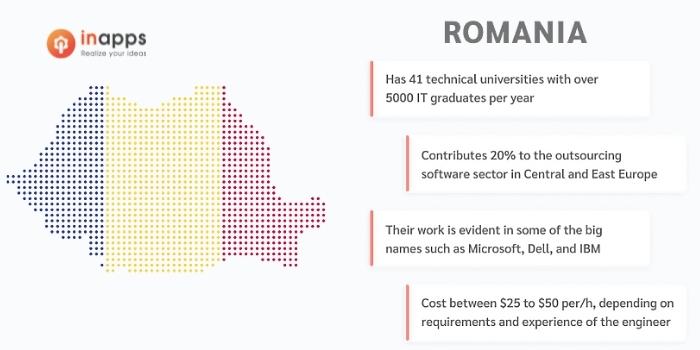 Key facts about outsourcing to Romania

Hungary is one of the most significant places to look for the best software developers. Hungarian developers are highly-trained and skilled in database development and developing code in Shell, C++, and JAVA.

Despite the country’s tiny size, its IT sector has risen tremendously over the years. Compared to counterparts in the Western Hemisphere, the cost per project is significantly lower.

Hourly rates of Hungarian IT professionals are pretty affordable, ranging from $20 to $55. 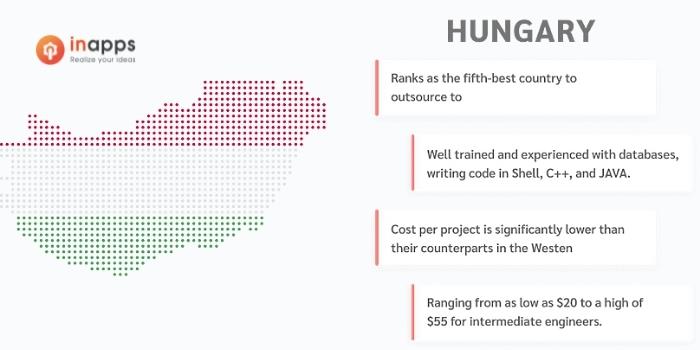 The Czech Republic is another high-ranking IT outsourcing country, providing low-cost software solutions and development expertise to organizations worldwide.

Google, the world’s largest IT corporation, maintains an office in the Czech Republic to capitalize on the software development sector thanks to numerous renowned technical colleges, which produce over 15,000 IT graduates each year.

Furthermore, the Czech Republic is one of the most economical countries for IT experts, with prices ranging from $15 to $50 for entry-level engineers to expert-level engineers. 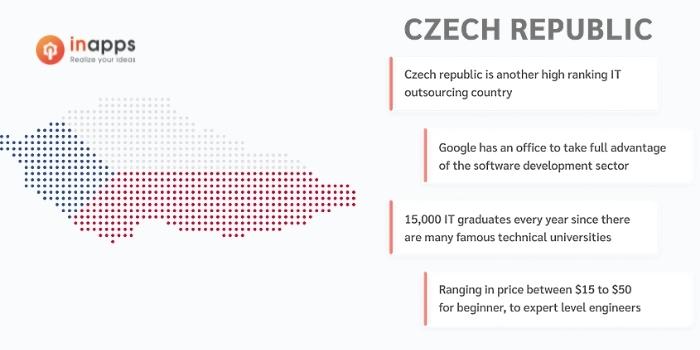 Key facts about outsourcing to the Czech Republic

Brazil’s software market is approximately $19 billion, with the IT sector accounting for up to 50% of the Latin American Software market, specializing in programming languages such as Java, Python, and SQL.

Communication is not an issue when hiring a Brazilian developer to work on your software development project because of 6.8 million English speakers. A web development developer’s hourly fee ranges between $20 and $50.

Brazil is ideal for outsourcing software development, particularly North American IT firms. Because of the close travel proximity, minor time zone difference, and cultural similarities, many firms from the United States and Canada chose it as their principal partner in specialist information technology services.

On the negative, typical developer rates in the region are higher than in other nations, ranging between $25 and $80 per hour. Outsourcing to Brazil is still less expensive than recruiting developers in-house despite the higher cost. It helps North American businesses to save up to 40%–60% on development expenses. 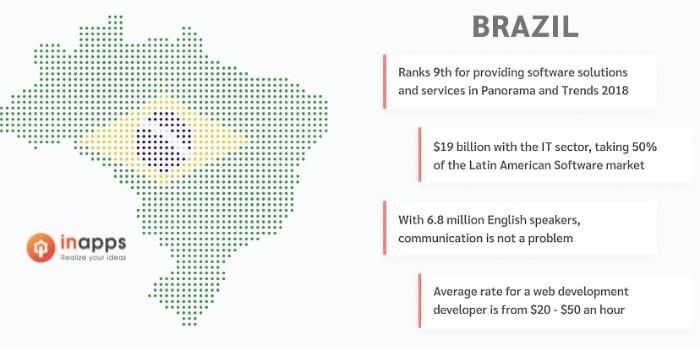 Both of these factors, when combined, result in a workforce that is competent in communication. Over 70,000 IT specialists work in the nation, and over 1000 organizations participate in the software development outsourcing industry.

Every year, universities generate around 100,000 IT professionals that are knowledgeable in C, PHP, Java, JavaScript,.NET Framework, and Data Science.

Hiring a web developer in Argentina might cost between $30 and $60 per hour, depending on the engineer’s experience. 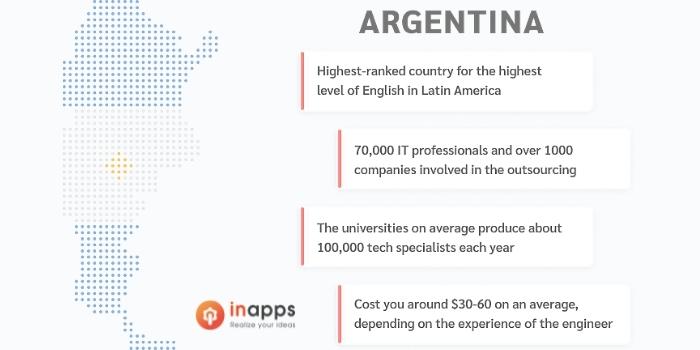 Key facts about outsourcing to Argentina

Software development is not one of the straightforward industries to break into. To success needs a tremendous deal of effort, expertise, and knowledge. Choosing a nation to outsource to may thus be a time-consuming undertaking because it all depends on the client’s requirements.

Read More:   3 Unpredictable Factors You Should Know Before Hiring An Offshore Team

Various factors, including personal choice, determine the finest country. Location, language level, expenses, political stability, and technical capability are all considered. Finally, the software developer should have the requisite talents to perform the work, offer a reasonable fee, and communicate effectively.

Finding the ideal team to create your product is a complex undertaking no matter where you are on the globe. You may, however, speed up the process by collaborating with a reputable software development firm.

InApps is in the Top 15 IT outsourcing companies ranked by Designrush. We assist companies worldwide in combating talent shortages by recruiting and retaining talented software engineers in Vietnam who work as an integral part of the client’s product development team.

We focus on the niche market related to mobility solutions and high productivity dedicated team to expand the business model for our clients. Our skilled and experienced teams can work on any software development project that you might need, as proven by their high customer retention rate.

Learn more about our services, or fill out the contact form below to let us know what skills you’re looking for. 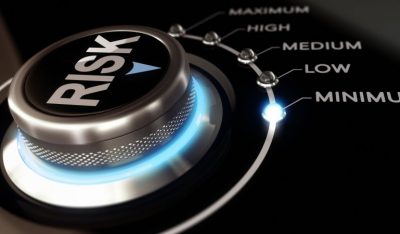 What business risks can fail your software development outsourcing project? 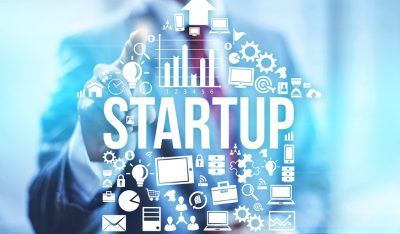 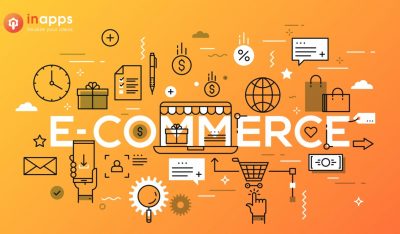 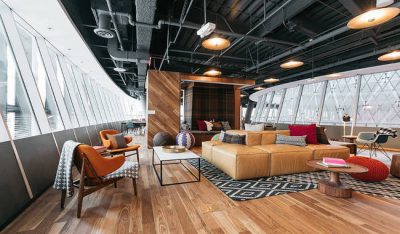 Co-living type for remote developers in 2022

SOFTWARE OUTSOURCING TIPS: HOW TO SAVE MORE COSTS? 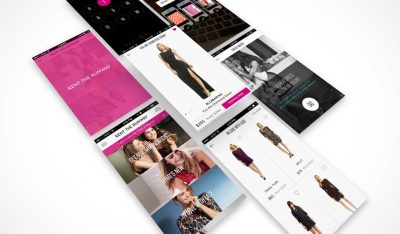 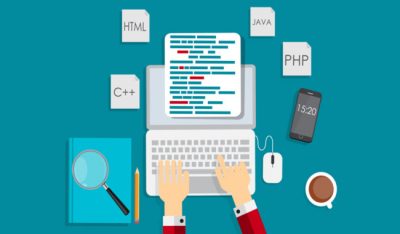 Reasons why remote developers are an asset – 2022