“I never truly understood DevSecOps until I encountered ________.”

There’s a new version of the game “Cards Against Humanity” — but in this edition the hilariously horrible combinations it can generate are aimed at the DevOps community. All the wacky questions and answers were created by DevOps security company Sysdig.

“This is a work of satire,” explains the game’s instruction booklet, “and we are giving it away free to the community to spread a little enjoyment.”

And thus far, it has been a hit in our container-centric cloud native community.

The idea for the game came up when Sysdig had signed up to sponsor the game lounge at KubeCon + CloudNativeCon EU, orginally to be held in March. The original Cards Against Humanity was released under a Creative Commons license, which allows remixing and sharing as long as the derivative works aren’t being sold. Soon two of the company’s UK-based employees had come up with the bright idea of creating a DevOps version of the card game, and started spending their off-hours brainstorming ideas for cards in February, said Amanda McKinney Smith, senior manager of corporate communications at Sysdig.

The game followed the rules of the original: It comes with two sets of cards, one with a set of questions, and then the other with answers. Players then come up with the most outrageous pairings between the two

After about a month, “they had a good number of cards,” McKinney Smith remembered, and “they took them to a larger group of Sysdiggers who added input and their own card ideas.”

From a pile of 400 possibly-hilarious cards, they’d created “test decks” which were left on tables at Sysdig’s sales kickoff meeting to get feedback on which cards would make it into the final deck.

The instruction booklet now jokingly describes the game as “A card game for people that think they know something about Kubernetes, Security, Containers, DevOps or a combination of all the above (they must be lying).” That’s followed by a strong disclaimer, emphasized in italics. “Don’t take this game seriously.”

“Someone had a huge amount of fun making this game,” TC Currie said as we started playing the game. Though, in this age of self-isolation, additional players were hard to come by. 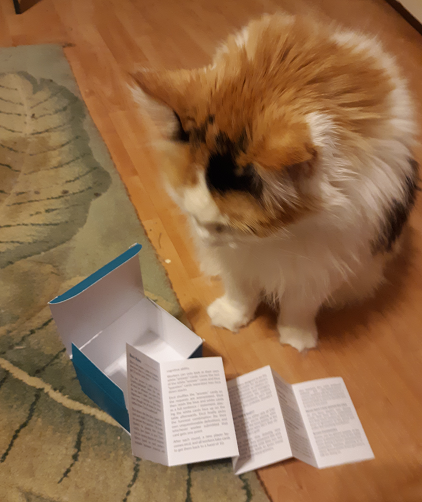 “The thing is we actually laughed out loud,” she added later. “And that’s not something we do a lot.”

It’s a beautifully-designed deck of cards, with bright colors and the Sysdig logo on the back (and front). And every card offers either a surprising question — or an equally surprising answer.

“The real reason we don’t release on Fridays.”

Decks can be requested through a page on the Sysdig site. But if you’re interested, you might want to get your name in soon. They’d initially promised to mail out 500 free decks, and “Several hundred have already been claimed and we have a limited supply.”

Janet Matsuda, chief marketing officer at Sysdig, said the company hasn’t decided whether to print more cards. “It will be based on demand and if it makes sense for future shows,” she said.

Sysdig is also prepping an online version that should launch within the next month. “With online meetings, people are getting really bored with sitting at home,” says Sysdig’s Smith. “And the reality is, with postal delays, getting cards to everyone in a timely manner is nearly impossible.”

“Content is technical,” warns the instruction booklet, “so children under five, salespeople and managers may not understand the content.

She points out that it’s easier to get a large group of players with an online version — the designers’ already tested it out on Slack, and even on a video call. “We think the online version will be a fun way for people to start or end a meeting. It’s a great icebreaker, especially now when we aren’t getting a lot of human interaction beyond our housemates and work meetings… We also love the idea of it helping to bring people together during this time. A quick five-round card game enables us to be human and have a laugh together.

“After all, with COVID, we have invited our colleagues, customers and partners into our living room. We have seen each other’s pets and kids, something that might have never happened previously. These reminders of humanity and solidarity are needed at this time,” she said.

Although the game’s instruction booklet warns that “There may be varying degrees of response latency based on each worker’s available hardware resources and cognitive ability.”

The company’s decision to release the game before Kubecon seems partly inspired by a keen awareness of the then-upcoming global pandemic. Sysdig’s founder Loris Degioanni is from Italy, and the company has an office in the hard-hit city of Milan. “In late March, before the UK and US went into stay-at-home order, we had first-hand accounts from Italians who had already been on lockdown for several weeks,” remembered Smith “and were expressing their boredom.

“Hearing their hardship, the team realized the game could actually provide some entertainment and laughs during this time; while also bringing people who are socially distancing, together.”

And the game’s designers made sure the cards were appropriate for all ages. “There are a lot of kids of DevOps community members that are getting into coding, and we wanted adults to be able to play with their friends and colleagues, along with their family.”

Everything is gender-neutral and inclusive — although “Content is technical,” warns the instruction booklet, “so children under five, salespeople and managers may not understand the content.

The instruction booklet notes some geek-specific rules. (“If Kelsey Hightower is playing, he goes first.”) And it also contains some additional suggestions for “House Rules,” given geeky names like “Never have I ever passed the CKA.” (“At any time, players may discard cards that they don’t understand, but they must confess at their junior level of ignorance to the group and suffer the resulting humiliation.”)

And there’s also a variation called “Scrum Ceremonies” — but the title is a literal description of its rules. “Points can be gained outside of the game if players use any of the white cards during a Scrum ceremony (retrospective, standup, planning or review).

“Bonus points if you get sent to HR for doing so.”

Smith shares one of her favorite white cards that didn’t make it into the deck:

“There are about 100 really great cards that didn’t make it into the deck,” Smith remembers. “We are working on expansion packs now.”

And more importantly, “Sysdig also set up a GitHub repo where people can suggest their own cards or make their own packs,” says Smith. “We will then go through those cards and upload them to the online version once it debuts.” 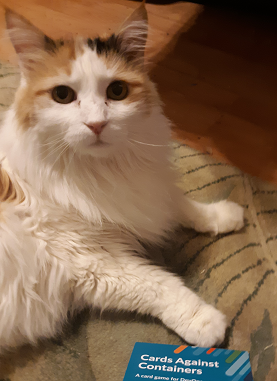 “If you would like to contribute a card idea for a future expansion pack please open up a pull request to this repository,” explains the page on GitHub. “The card idea will be reviewed by one of the OWNERS and at their discretion will be accepted to the repository for the next build.”

One fun feature of the GitHub repository? It gives you a chance to take a gander at all of the black-card questions — as well as all the white-card answers.

And it even promises documentation coming soon to build your own decks.

“Cards Against Containers is a really clever game, but I am excited to see the cards suggested in the GitHub repo,” Degioanni, Sysdig said. “Sysdig, a security company, was built on open source and we truly believe that when the community collaborates and shares, we improve visibility and strengthen security in all environments.

“With that same collaborative mindset, our open source team suggested we open the GitHub repo to get the community involved with the cards!”

InApps is a wholly owned subsidiary of Insight Partners, an investor in the following companies mentioned in this article: Hightower, Sysdig.