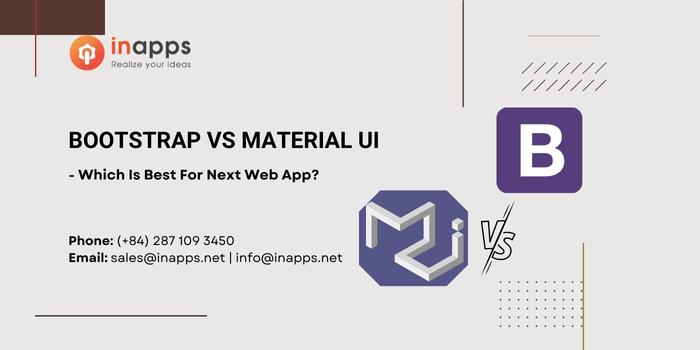 Bootstrap vs Material UI has been a trending topic for a long time amongst developers. The excellent user interface has become particularly significant for companies as it aids in user engagement and brand recognition.

Front-end website and app development systems, such as Bootstrap vs Material Design, allow developers to build websites with a strong structure and advanced features, resulting in exceptional business solutions and an unrivaled user experience.

Development teams use both Bootstrap and Material Design to build functional and high-quality sites and applications. If you’re a budding front-end developer, below is a valid comparison of Bootstrap vs Material UI so you can pick the best one for your next project. Let us first understand each one of the frameworks individually before heading on to drawing a comparison between the two. 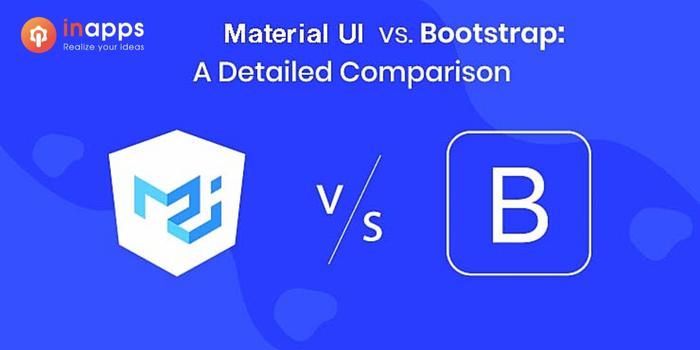 Bootstrap is a versatile CSS, HTML, and JS framework that aids in the development of responsive web applications. It is the most widely used platform for developing mobile and desktop applications. The original name is Twitter Blueprint since Bootstrap was created as an internal framework by the Twitter team. On August 19, 2011, the very first version as an open-source project was produced. The primary aim of that framework was to enhance the job of developers and to promote consistency through internal tools.

If you only have a short period of time to create a website or app, Bootstrap is an excellent option. It provides fully prepared code blocks that can get you up and running quickly. As a result, you do not have to start coding from zero.

Bootstrap also offers ready-made themes, templates, and other tools that can be downloaded and personalized to your specifications, enabling you to build a beautiful website as quickly and efficiently as possible.

Google began using mobile friendliness as a crucial ranking metric for all sites since July 1, 2019. This is due to the fact that people choose to use websites that are consistent with the screen size of the device they use. In other terms, they tend to visit websites that are responsive.

Bootstrap is an obvious option for responsive sites due to its excellent fluid grid framework and responsive utility classes, which allow the task to be simple and quick.

Bootstrap has a plethora of tools available on its official site and is widely supported by the developer community. As a result, it assists all developers in resolving problems as soon as possible.

Mark Otto, currently Principal Design & Brand Architect at GitHub, is presently developing and maintaining Bootstrap, with approximately 19 thousand commits and 1087 contributors. The team publishes updates on a regular basis to address any new problems and boost the framework’s efficacy.

What is Material UI?

Material UI can also be used with other frameworks like Angular and vue.js to make the Application more amazing and responsive. With over 67,900 plus stars on GitHub, Material UI is one of the top User Interface libraries for React.

Material UI components inherit style component syntax, which means you just need to import the component that you want to use and use it as a react component.

Let’s understand the Material UI components with the help of an example:

First, create a new React app with the create-react-app command and give it a name:

Now let’s add material UI in our project using either of the below command:

Before you start developing with Material UI, do not forget to change the font to Roboto. Material UI’s components are styled according to Roboto, so it’s best to use that font. Then, navigate to /public/index.html and add the following line:

Now, we are all set to start to developing in Material UI.

We are going to create a simple login page using material ui components.

Now start your project using either of the below command:

Material Design includes a number of components that include a foundational design, instructions, and templates. Developers may focus on this to build a business-appropriate website or application. The Material Design framework provides instructions on how to use each part.

Furthermore, Material Design Lite is well-known for its customizability. To take their projects to the next stage, several designers are developing personalized components.

Both Bootstrap and Material Design have good browser compatibility, since they are compliant with the majority of browsers. Material Design is compatible with the Angular Material and React Material user interfaces. It also makes use of the SASS preprocessor.

3. Not dependent on Javascript frameworks

Bootstrap is entirely reliant on JavaScript frameworks. Material Design, on the other hand, does not require any JavaScript frameworks or libraries to design websites or applications. Indeed, the platform includes a material design system that enables developers to build novel components such as cards and badges.

Bootstrap VS Material: A Detailed Comparison

Bootstrap grid is a mobile-first grid program that utilizes containers, rows, and columns to enable the app to conform to any device. Rows and columns are joined together to form one or more containers. A bootstrap grid system is a 12 column system with a set of rules to obey, such as rows being used only to construct columns, there being no material within the row, only columns being direct children of rows, and so on.

The responsive UI of Material Designs is built on a grid system of 12 columns. Column width is variable, whereas gutter widths, which create the space between text, are fixed values between 0 and 10px. Fixed values are also specified for the margin widths that distinguish the content from the left and right screen borders. Gutter and rim widths may be equal or unequal. When the screen size exceeds such preset values known as “breakpoints,” the grid feature is enabled. When this occurs, the interface adapts to the size of the screen and changes the number of columns in which the app displays its content. This gives developers and users a completely responsive UI.

Bootstrap is not a simplistic framework. The package covers a range of functionality and a lot of code, including a number of scripts, CSS classes, and jQuery dependency. This causes issues with efficiency, the app’s massive size, battery draining, and page speed. You can escape the effects of the Bootstrap framework if you put in the effort and remove components that aren’t included in your app. Then you’ll have a compact app that works. The Bootstrap development team is also moving in that direction, and we anticipate that jQuery will be removed from Bootstrap 5.

Material UI is a set of components built with React. Components could be used independently of one another, which implies that you only have styles in your app for the components that the app uses. Material UI is written entirely in CSS and does not involve any third-party libraries to work. You just get what you need and want.

Bootstrap includes many UI components such as typography, tables, buttons, navigation, labels, notifications, tabs, and so on. It offers enough required elements to create an aesthetically looking interface with minimal effort, allowing developers to focus on the app’s usability. Besides that, there are several themes and templates available for download on the internet. As a consequence, development occurs at a rapid pace.

Material UI offers material-based UI components to programmers. They aid in reducing the amount of time required for design and app development. However, since Material UI is primarily a set of UI components, it does not have the same level of speed of development as Bootstrap. It is preferable to use content templates if you’d like to substantially increase development speed.

Bootstrap is a framework for organizing and presenting the information. And we emphasize the word “details” since apps like Twitter, Coursera, and Apple Music were created with a simple design that included subtle colors, bold and large titles, and little to no animation. People are visiting these websites to get details as quickly and easily as possible, not to experience stylish buttons or smooth and bright animation. Bootstrap offers the opportunity with a minimum of disruptions and a straightforward and understandable UI.

Material design was created specifically for mobile devices. Since mobile screens are tiny, there is less room to position elements and details – the solution from Material UI is animation, layers, sliders, and pop-ups. Mobiles lack a compass, so users must recognize where they tap on a touch screen – this is where animated input from the application comes in. Although animation improves the user interface and looks impressive, if you’re using an app on a regular basis, this pleasant looking smooth animation can be daunting. It is very simple to make the app look amazing with Material UI, but an aesthetically pleasing interface does not always fulfill the requirements of the consumers.

You must also read about more React Component Libraries present in the market right now. Now as you would expect, the appropriate response is entirely dependent on the venture you’re involved in and the goals you’re attempting to accomplish. Bootstrap ought to be your go-to design tool if you want to create easy but efficient and highly responsive websites in the shortest amount of time.

Material Design, on the other hand, is a little more sophisticated, with vivid colors, visual cues, and elegant animations that fit in with imaginative and intuitive designs. And if you just want the best of both worlds, Material Design for Bootstrap is the way to go (mdbootstrap).

mdbootstrap  is a collection of libraries built on top of Bootstrap and other common frameworks such as Vue, Angular, and React, and it adheres to Material design principles. This combination enables developers to use similar to bootstrap syntax, which everyone is acquainted with, resulting in less complications when developing. You can find a list of mdbootstrap for various frameworks here.