Nočnica is a Developer Advocate at New Relic.

There was a moment at Deserted Island DevOps when it seemed like things weren’t going to work. I couldn’t find my room, the keynote speaker was having issues with their mic, and my merch still hadn’t shown up in the booth.

I realized I was wandering around the island because I couldn’t believe that a whole conference could happen inside such a tiny house. Of course in Animal Crossing your house still looks like a tiny cottage from outside even if it has plenty of space for several convention booths.

There were so many ways things could have gone wrong: if anyone had lost their connection in the middle of the video stream, hundreds of registrants would have been treated to a two-minute unskippable cutscene. Juggling the switch controls to move your digital avatar while advancing slides and giving your talk sometimes felt like, well, juggling.

As I swung my joy-con stick to make my little avatar pace back and forth, as the avatars of other speakers laughed, clapped, and showed surprise, the talk worked. 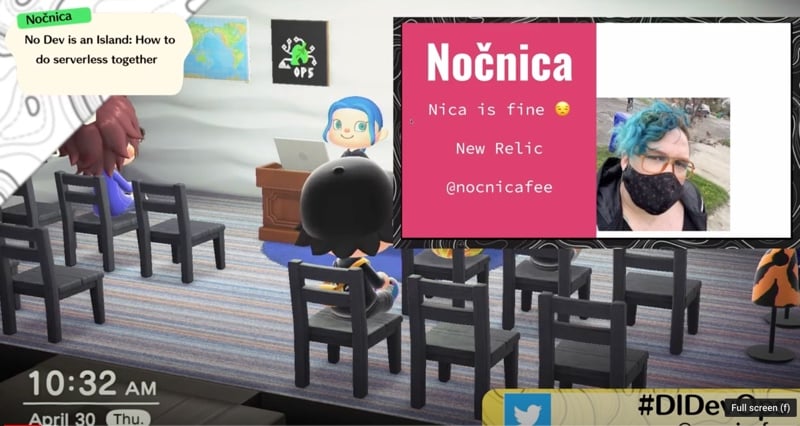 People Are the Key

In the end, a tech conference is only as good as its speakers, and there were some amazing ones at Deserted Island DevOps. A common thread from all these talks: it’s people, and how they organize in teams, that determine whether your DevOps succeed or fail.

How to Make an Online Tech Event Work

I’d like to write up what, for me, felt like the essential pieces of making the conference work:

Whether you’re doing a tech conference in Animal Crossing or a meetup as a Dungeons & Dragons campaign, it’s vital that your online conferences have a simple and captivating hook for attendees and potential speakers. This should come before promotion, before a speaker list, and definitely before you’ve figured out registration and presentation. Your hook will set the tone for the rest of the conference.

The Call for Papers for this conference went out a scant 12 days before the event. Without travel to book, and most people on flexible schedules, the event Austin was able to get a strong lineup of speakers in a very short time. There’s no need to plan months in advance to have a successful conference.

I often get a sinking feeling when registering for a virtual meetup. The signup form asks me my name and email, then my company, then my company’s industry, then its size, then my phone number, then my manager’s number, before asking for a DNA swab. Such forms are intrusive and they’re often acting in the wrong order: before I’ve seen your product or met your team you’re asking me to become a sales lead.

If you want a critical mass of attendees and participants, it’s critical to keep signup and check-in light. Deserted Island DevOps required only an email address to sign up, and ended up with over 1,000 registrants!

Austin Parker created this conference, did a lot of promotion, and it was his island we all congregated on. But both before and during the conference, Katy Farmer was the “glue” that kept the conference running. She introduced speakers, checked bios and pronouns, and critically scanned the chat channels for questions to read to the speakers at the end. Katy’s closing talk was excellent and was such a pillar of this wildly successful conference that it’s shocking she hasn’t already been hired after a layoff last week. Get in touch with her directly if you need to grow your dev community.

More than 1,000 people registered for Deserted Island DevOps, but the story is even bigger than that: the conference’s twitch stream had more than 11,000 viewers throughout the day. A huge success with a wonderful tone and amazing talks throughout. If you missed it on the day, fear not. All the talks (including mine!) are available on YouTube right now.

InApps Technology is a wholly owned subsidiary of Insight Partners, an investor in the following companies mentioned in this article: Island.