The benefits of running on Kubernetes can be overshadowed for some by the difficulties of operating Kubernetes itself. In response, many of the big cloud providers over recent years have introduced managed Kubernetes offerings, taking over many of the difficulties of installing, configuring, and operating the container orchestration tool. While these managed offerings help solve some of the complexity, they still provide a point of view solidly focused on Kubernetes, rather than running and managing an application that is delivering value to customers.

In 2019, DigitalOcean released its own managed Kubernetes offering, but now the company is taking that one step further with the launch of the DigitalOcean App Platform, a platform as a service (PaaS) built on Kubernetes that is meant to provide an application-centric view to developers who want to enjoy the benefits of Kubernetes without dealing with its complexities.

“Kubernetes provided a great start gap to take some of the common infrastructure management away, but at the end of it, it is still APIs and still complicated. There’s an increasing demand from people to have that next layer of abstraction on top of it, that allows you to iterate faster, where you just focus on writing code, and then all these benefits that you want to enjoy from the ecosystem are built-in turnkey for you,” said DigitalOcean Vice President of Product Apurva Joshi in an interview. “We shipped managed Kubernetes and we wanted to provide another layer of abstraction on top of it, so we use our own managed Kubernetes offering in a shared clusters environment where we do multitenancy built on top of Kubernetes and using open standards.”

One of the open standards used to build App Platform include Google’s gVisor, an application kernel that provides an isolation boundary between the application and the host kernel and allows for DigitalOcean to securely run workloads in shared Kubernetes clusters. Another, Cloud Native Buildpacks, was originally conceived at Heroku and helps to transform application source code into images that can run on any cloud. A third, Kaniko, is a tool to build container images from a Dockerfile, inside a container or Kubernetes cluster. 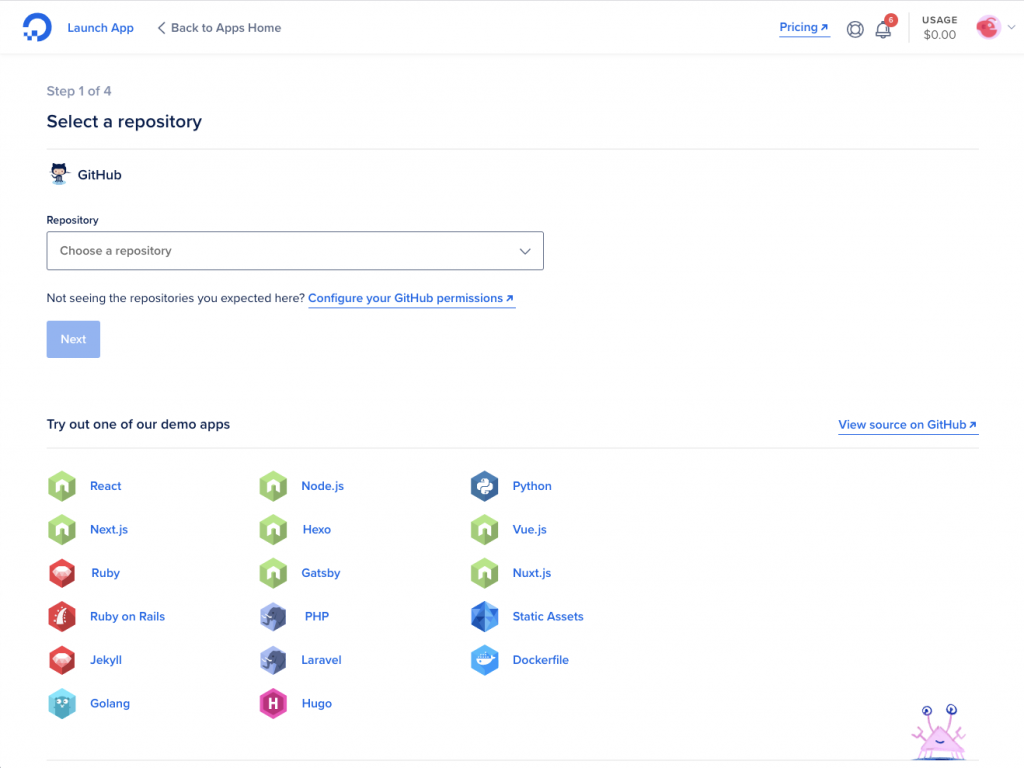 Currently, App Platform users can point to their GitHub repository — GitLab and Bitbucket integrations are on the way — and the platform takes the Python, Node.js, Go, PHP, or Ruby code, builds it into containers, and deploys them. For languages not included on that list, App Platform simply requires a Dockerfile and uses Kaniko to build and deploy the containers.

“When you point us to your code, we take the code, we use the build, pack and build it for you inside those clusters free of cost before you go deploy your site. All of that requires good sanitization to have great security and making those bets on things like the gVisor and Cillium allows us to move faster,” said Joshi.

Part of the reason for running workloads on shared clusters, of course, relates to cost, a point that Joshi focused on. By building App Platform on top of its own services and having control of the infrastructure itself, the company says that it can keep costs low even as workloads scale — a point where other companies usually have to increase cost.

“The ecosystem has evolved that allowed us to leverage some of those open source pieces of the orchestration, and allows us to be competitive in a way where we could pass on the savings of running the workload at a cheaper cost in shared clusters back to our customers,” said Joshi.

App Platform is currently available in three tiers, with a free Starter tier for static sites, and two tiers for dynamic content, with a Basic tier for prototyping, and a Professional tier for deploying to production. Joshi detailed a number of upcoming features in his introductory blog post, but separately emphasized functions-as-a-service and edge computing as two areas the company would be focused on in the near future, as powered by the open technologies in the cloud native ecosystem.

“We wanted to ride this wave of innovation on the open source standards, the open source way. The most critical aspect is to listen to customers. If we decide to provide function-as-a-service, it’s just a matter of a quarter or two, because there are so many other open source projects out there,” said Joshi. “Making these bets on these open standards has essentially allowed us not to differentiate against the existing PaaS providers. This platform is built for the future. If I want to add new services, if new innovation in the Kubernetes ecosystem comes in, it’s really a matter of a quarter or two for us to start giving those benefits back to the customers. That’s why this is powerful.”