GitLab likes to describe itself as one of the world’s largest all-remote companies — and as a thought leader on best practices for remote working. It’s a message delivered in multiple venues — and it’s proving to be especially relevant during a pandemic.

For example, this week the company launched a new course on Coursera titled “How to Manage a Remote Team,” promising in-depth lessons from its own in-house experts. “As an open-core company, we’ve publicly documented and iterated on everything it takes to run a well-oiled remote work machine,” co-founder and CEO Sid Sijbrandij said in a statement.

Earlier this month a new video also appeared on YouTube from the developer conference GOTO Chicago 2020. In the video (filmed remotely in April), GitLab’s senior developer evangelist Brendan O’Leary describes how the company built its “asynchronous enterprise” with 1,200 employees.

The Case for Remote Work

O’Leary believes that all-remote workplaces will be the future of work — and he notes that science fiction writer Arthur C. Clarke made the same prediction in 1974.

Clarke said that with the computers of the future “Any businessman, any executive, could live almost anywhere on Earth and still do his business… It means we won’t be stuck in cities. We’ll live out in the country or wherever we please and still carry on complete interactions with other human beings as well as computers.”

“He was right,” O’Leary said. “He knew that that kind of collaborative tooling was going to come to computing.

O’Leary cites some observations by investor Marc Andreesen — that not only is software eating the world, but that the ultimate tech winners may be heavily influenced by cycle time compression. (Or, put more simply, how quickly developers can start delivering value for customers in an increasingly competitive world.) With companies fighting for top talent, remote workers has to be part of the answer, but so do the other “emergent challenges.” O’Leary identifies these new challenges as the need for asynchronous work, across cultures and time zones, one that’s “inclusive of diverse ways of working” that welcomes in new perspectives. The world has 195 countries, as well as 6,000 linguistic cultures.

“I think it’s clear that technology is the future and the now of every industry, and the few tech hubs in the world just aren’t sustainable as the only source of technical talent. But it’s also complicated because it’s complex to scale outside of those hubs without a massive capital investment.”

Other companies have been using a remote workforce for years, he points out, including Basecamp, Envision, and Automattic (the creators of WordPress). And he offers GitLab as proof of just how well these barriers can be transcended. The company has 1,200 team members scattered across 65 different countries around the globe — on all six continents. with a valuation of almost $3 billion. “And we still have exactly ‘0’ office,” O’Leary emphasizes.

So how did GitLab do it? “Trust.” For most of the company’s existence, more than half the company had been there for less than one year — which has led them to place a heavy emphasis on transparency. “Hyper-growth means we can’t afford to train people in meetings,” explains one slide, adding “Recording by default enables self-paced learning and discovery.” This is good for both sides of the communication flow — reducing redundancy and inefficiency while ensuring the most up-to-date information. 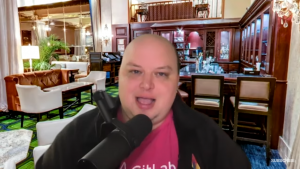 One practical tip involves taking smaller steps. “We focus really intensely on iteration, allowing us to adjust scope constantly, and reducing the need for coordination which enables these asynchronous, cross-timezone workflows.” This enables fast iterations, “And we’re fanatical about it. “You hear folks talk about a minimal viable product? Well, we talk about a minimal viable change.”

Another practical tip: every decision always has a directly-responsible individual, “which increases our decision velocity greatly, by not paralyzing us in decision-by-committee.” A slide underscores its “Bias for action” philosophy. “Decisions should be thoughtful, but delivering fast results requires the fearless acceptance of occasionally making mistakes.” (And to keep everyone accountable, they also write promises down, “agreeing in writing on measurable goals.”)

In practice, this involves some more specific policies —  like using merge requests to allow changes to be initiated asynchronously and transparently. And the company encourages the use of Slack and separate channels for conversations of three or more people. There’s even a dedicated #thanks channel for acknowledging people who’ve been helpful.

“And we have to be really intentional about that because there isn’t an office for us to run into each other and have those things happen,” O’Leary said.

After Ukraine-based Dmitriy Zaporozhets built the first iteration of his developer collaboration software, it had turned up in 2012 on the U.S.-based website Hacker News — where it was spotted 1,300 miles away in the Netherlands by Sytse “Sid” Sijbrandij. “He was impressed because there were 300 contributors at the time, a clean code base,” remembers O’Leary, “and it made a lot of sense to him — that something you collaborate with is something that you can contribute back to as an engineer.”

Sijbrandij began hosting the software (which was open source) at GitLab.com. Over in Poland, software engineer Kamil Trzcinski added GitLab Runner, which became the main agent for running GitLab continuous integration jobs — and convinced the other two founders to roll it all into a single application — which leads O’Leary to his larger point.

“That was all done remotely from their homes in Europe.” 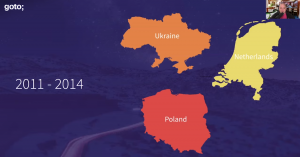 O’Leary’s talk featured a photo of the house the founders lived in during their stint in Y Combinator’s seed accelerator program in Silicon Valley, followed by a photo of their first office in San Francisco. But the San Francisco office was also its last, O’Leary pointed out, because “people stopped showing up to work, but work was still getting done.” The salesman hated his commute over the Bay Bridge every morning from Alameda, and ultimately discovered “he could do his job better if he just stayed home.”

In fact, the challenges of a remote workforce are also accompanied by some built-in benefits. For example, taking away the constraints caused by commuting “makes collaborating with everyone in the wider community much more natural,” O’Leary said.

He points out it also benefits the family and friends of employees, offering more flexible schedules and the ability to stay close to home and family members.

Company employees still try to meet in person when it’s possible. There’s a travel stipend, local meetups, and an annual community-building event. O’Leary acknowledges that’s been reduced during the pandemic, and that GitLab has had to make other adjustments just like everyone else. Many workers now have the added complication of children home from school. But he ultimately views that as proof that companies will always have to be prepared to adjust to their employees’ environment, whatever that may be.

“On this journey, our values have remained the same. We value collaboration, results, efficiency, diversity & inclusion, iteration, and transparency,” he said. “And we’ve done all that without having any office, headquarters, or anything that looks like one.”