To develop and package its cutting edge ChatOps tool, start-up Operable turned to Docker containers both to speed the process of developing the software and make it easy for customers to deploy the tool.

On the stage at RedMonk’s Monki Gras event in London, Operable Chief Technology Officer and co-founder Kevin Smith shared details of how his company built its ChatOps platform Cog.

ChatOps is slang for conversation-driven development which combines tools and conversations, utilizing a chatbot that you then customize with plugins and scripts, all designed for your team to collaborate and automate better.

ChatOps is arising as one of those important tools to solve the problem of distributed team collaboration, whether it’s across tools, languages or locations. Before you may have been tracking down colleagues to figure out who did what, but now chatbots work a transparent manner, tracking it all. Plus, it all comes with a lovely amount of automation, which assists in your continuous delivery process.

Whether you’re collocated or distributed, your team is probably already communicating via a chat client like Slack. Now imagine that inside delegated chat channels, you can track everyone’s actions and notifications, as well as any bugs, testing results, etc.

Smith’s talk wasn’t a product pitch, but rather using the story of how his company built Cog. He kicked it off by talking about how we spend a lot of time focusing on infrastructure, applications and automation management, but we often neglect the human factor.

Cog is a Unix-inspired shared automation shell or “modern shrink wrap for software,” which is packaged as Docker images and built with a plugin API on Docker.

“I think Docker’s biggest innovation is Docker images,” which he called “executable packages.” He says this is because the Docker images are:

The company chose to build their tool around shipping Docker images because, at the start of their platform, Docker images were downloaded vastly more than other images. Docker chose to still release their source code but to stop using open source packages.

For his team, the benefits of using Docker images as shipping packages is:

Next, Smith described the configuration and design necessary to build Operable’s ChatOps platform:

“All of this has us being extremely mindful about how we manage application state,” he said.

The development team versions all their Docker artifacts right along with the code that it manages so there’s an audit trail to see just how the code is changed and how they’ve updated the config. “So when you release something, you have a high amount of faith it’s just going to work,” Smith said.

The container ecosystem provided the development team with the ability to do extreme dogfooding: “We do everything in Docker, unit testing, functional testing, integration testing, right inside Docker,” Smith said. We don’t do anything natively on our computer. This enables us to hit rough edges way before the user does and we run integration tests via docker-compose, in a way the users are going to interact with that.” 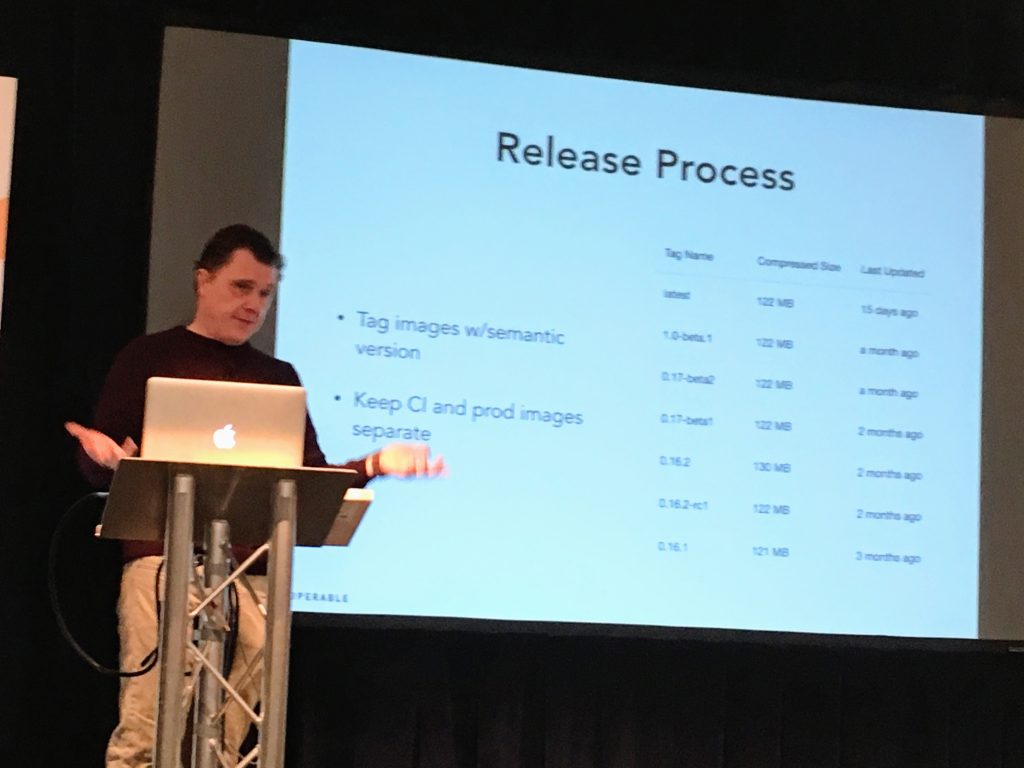 He said that using Docker solves a lot of design challenges for the API for ChatOps, using the following workflow:

How it all works in practice for the Cog development team:

“This is how we assure that this command runner is always available — and we don’t have to bother the user with any of the implementation details,” Smith said. 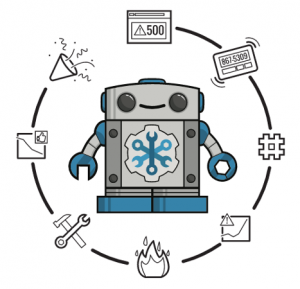 He said following this process, Cog’s performance is at:

In the end, Smith described his tool and the ChatOps operation they’ve built on as scalable for creating and destroying containers, while the I/O input-output is stagnant. He then summarized the following pros and cons of this process:

He did note there were several downsides of building a ChatOps platform based on Docker images: Containers still have poor container startup scalability, so cache whenever possible, Smith advised. Also, Docker still needs to further document the container I/O API. “Like most open source, the documentation is strongly lacking,” Smith said.

The upside of building a ChatOps platform based on Docker images:

In the end, it’s not perfect, but it was by far the most perfect for Cog’s needs.

Rate this post
Read More:   Update Redis Labs on Why NoSQL Is a Safe Bet for Today’s Multi-Environment Deployments