Microsoft has carved from its Visual Studio integrated development environment (IDE) a smaller, more portable code editor that could be a handy tool for administrators and DevOps-minded programmers who need to make quick changes.

Last week, the company released the beta version of this editor, called Visual Studio Code. It has also posted the source code, an indication of the company’s intent on supporting enterprise operations beyond its own Windows platform.

Since its alpha release earlier this year, the editor has proved to be quite popular, having been downloaded more than a million times. Compiled versions are available for Windows, Mac and Linux.

Along with the beta release, Microsoft has expanded VS Code in a number of ways, Harry explained.

Perhaps most importantly, it has made the software extensible, allowing for developers (and third-party software providers) to customize VS Code to suit particular environments.

“VS Code was built from the bottom up to be extensible, but we had not made the extensibility mechanism available yet because we were refining it and getting it right,” Harry said.

Managing extensions in VS Code.

When it comes to the extensibility in editors, the obvious point in comparison would be to the Lisp-based GNU Emacs, which users have customized for myriad uses, often beyond recognizability.

But VS Studio and Emacs are two different beasts, explained John Montgomery, the Microsoft director of program management for Visual Studio. While both offer extensibility, Emacs is a general purpose text editor, while VS Studio is a code editor; it has developer-specific features such as debugging built in.

VS Studio was also built specifically for DevOps operations, allowing users to “edit, compile and debug right from within the editor,” Montgomery said.

The company has released about 100 extensions in the company’s newly launched Visual Studio Marketplace. One extension is for writing programs in the Go programming language.

With the Go extension, developers will be able to enjoy syntax highlighting, Go-specific debugging, IntelliSense code suggestions and other supportive mechanisms from Visual Studio. 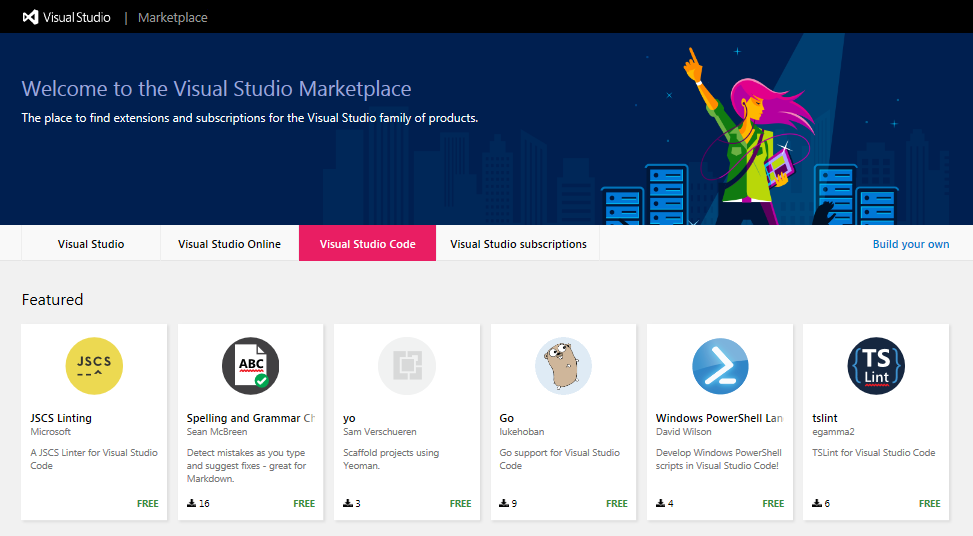 Other extensions offer capabilities such as spell-checking, linting and for Markdown editing. VS Studio extensions are composed in TypeScript.

This year has been an unusually exciting year for open source code editors. In addition to the launch of VS Studio, GitHub has also launched its own Atom text editor. Both are attempts to steal developer mindshare from long-loved favorites as GNU Emacs,  Vi and Notepad++.