Redux VS Mobx – Which is better? 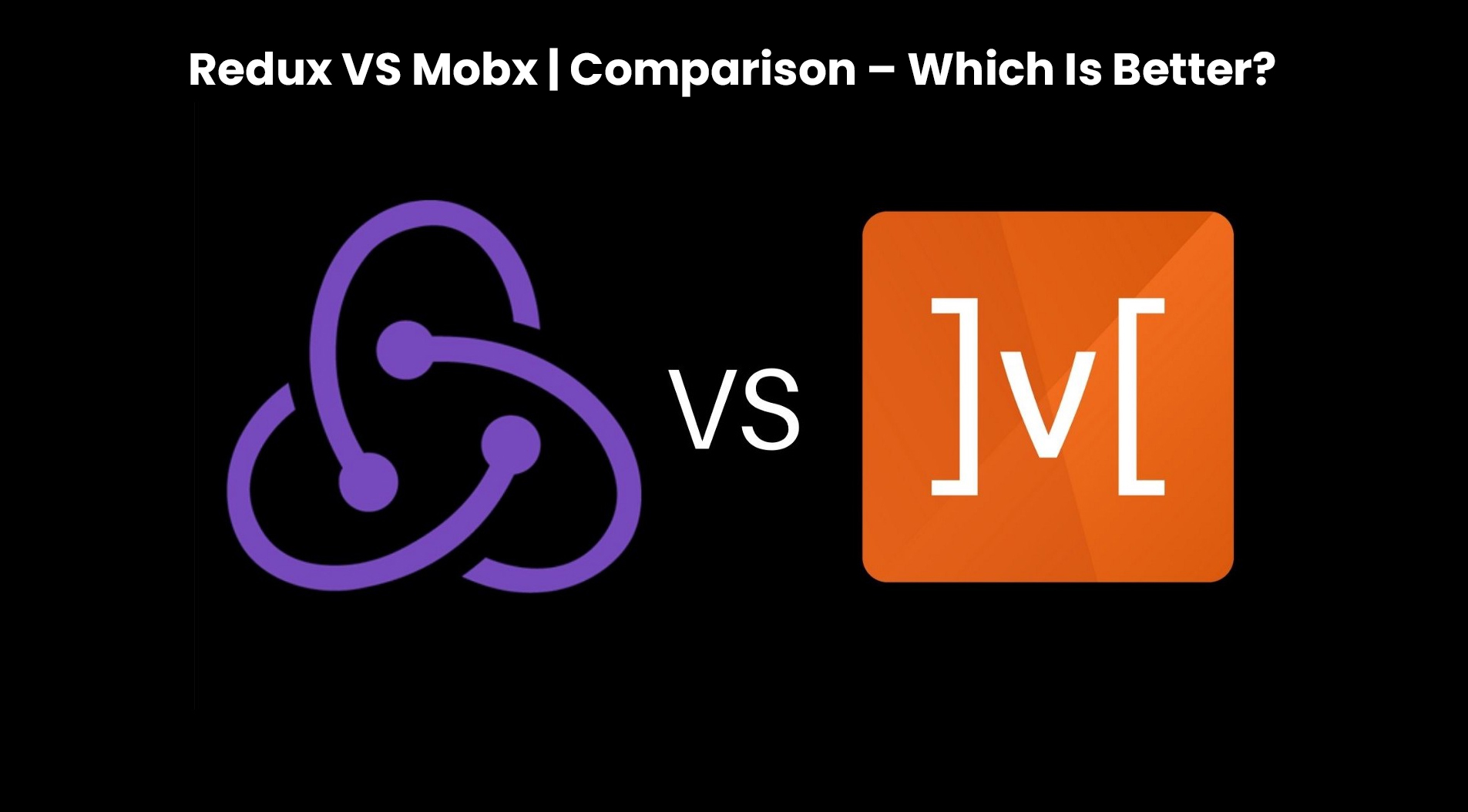 All JavaScript frameworks have to deal with the issue of the global state, which is the problem of updating the interface after your models have changed. Redux and MobX are two state management libraries that solve this problem in their own ways.

State management is a hot topic in the web application development community. This article will help you decide which framework to use for your next project.

In the case of application development that makes use of the component-based library, like ReactJs, every component manages one’s own local state, and the root component usually manages the application state.

Several components communicate with the state data and modify it before having it sent back to the server. Components may also manage their state through component life cycle methods. As the complexity of the application increases, the component state becomes unstable and it becomes a long process to debug these applications.

The state management systems such as Redux and MobX are used to transfer state from components as a stand-alone testable unit to prevent certain situations as well as provide methods for synchronizing application state with react components. When data comes directly from a common source, the logic of the application code becomes clearer.

The most common state management library is Redux. But, with MobX you get to enjoy the benefits of complex reactive systems without the complexity of managing an entire state tree.

We are assuming that you already have an initial understanding of how state management functions in your web application, let’s go ahead and learn about each one of them individually and then do a Redux Vs MobX comparison.

Redux is an open-source JavaScript library used for state management, popularly known to be used with libraries such as React or Angular for building user interfaces.

It is a blend of Facebook’s Flux architecture and functional programming concepts influenced by the Elm programming language and was created by Dan Abramov and Andrew Clark.

MobX is a powerful library that makes state management easy and versatile by transparent functional reactive programming (TFRP). It is basically a state management solution that enables control of the local state inside your application.

Redux VS MobX: A Comparison

We would like to provide you with the similarity between MobX and Redux before we delve into the comparison part and point out the differences.

Both libraries are used to monitor the state in JavaScript applications. They’re not usually connected to a library like React. They are also found in other libraries such as AngularJs and VueJs. But they combine well with the React concepts.

Since Redux supports functional programming, it uses pure functions. The function gets input, returns output, and does not have any other dependencies except pure functions. Pure function often generates the same output with the same input and has no side effects.

In contrast, Michel Weststrate’s MobX is inspired by object-oriented programming, as well as by reactive programming. It covers your state in observables. Therefore, in your state, you have all the attributes of Observable. The data may have simple setters and getters, but the observable allows updates to be retrieved after the data has changed.

Redux requires a while to grasp its trends and concepts, it’s a mix of Flux architecture and functional programming principles. If you’re a functional programmer, you might find it simpler to comprehend Redux, while if you’re coming from an object-oriented programming background, the Redux code may initially look complicated and difficult to understand.

Understanding Redux also indicates you will have to learn more about Redux middleware like Thunk and Saga, which provides more content to acquire.

MobX is considered to be somewhat simple to interpret than Redux. Most JavaScript developers are very proficient in object-oriented programming, making the process of learning MobX quite easier.

Also, there have been a lot of things going on in the background in MobX, providing a better learning environment for the developers. You wouldn’t have to think about normalizing the state or implementing principles like Thunks. It also required less writing of the code because the abstraction is already built-in.

Read This | MongoDB Vs MySQL : Which One Is A Better?

Redux offers great developer tools, including time travel. And with pure functions and less abstraction, the debugging process seems to provide a better experience than MobX. The flux paradigm makes Redux quite predictable.

In MobX, there is more abstraction making the process of debugging getting a lot difficult. And the existing MobX developer tools are also only mediocre. Results can sometimes become uncertain and difficult to predict.

In Redux, you get access to just one store, and that is the only source of truth. The state of the store is immutable, which makes things simpler for us to figure out the data/state.

Also, while there is a massive JSON object that describes a store, you can still split the code into numerous reducers. You can logically separate the problems with multiple reducers in this way.

This seems to be a comprehensive technique for many developers, since they can only relate to a single store for the status of the application, and there is no risk of duplication or uncertainty as to the current state of the data.

MobX enables the usage of multiple stores. Here, you are allowed to logically separate stores, so the state of the application is not all in one store.

Most of the applications are planned to have at least 2 stores: one for the UI state and more than one for the domain state. The benefit of the separation of stores in this manner is that you can still reuse the domain in many other applications. And the UI store will be unique to the current app.

Redux uses basic JavaScript objects as a data structure to store the state, this allows the changes to be monitored manually. This can add a little bit of overhead when it gets to applications with complex states to handle and maintain.

MobX uses observable data to track changes seamlessly and automatically via subscriptions. Very obviously, automation makes things simpler for the developer. So, it’s no surprise that many find MobX to be an outright pick in this division as it is more convenient to use.

Read This |Ruby Vs Python-Which is Better for Web Development?

The state in the store is immutable in Redux, which implies that all states are read-only. Actions in Redux can induce state changes, and reducers can substitute the previous state with a new state. This is one of the fundamental concepts of Redux.

Below is an example of what a pure function looks like:

The Redux functions are composed in this manner. Reducers are pure functions that accept a state and action returning a new state.

This is what makes Redux pure.

In MobX, the state is mutable, which indicates that you can easily update the state with new values making MobX impure. Impure functions are difficult to test and manage because it creates a possibility of returning outputs that are unpredictable.

Because the Redux store is all pure, it makes it predictable, and it’s simple to revert state updates. In the case of MobX, if not done correctly, state changes could make the debugging process more difficult.

The Redux library is somehow very limited. A lot of the time, you’re just working with basic JavaScript objects and arrays.

In MobX, the objects and arrays are wrapped in observable objects that conceal much of the boilerplate. It develops on hidden abstractions. It’s simpler to deal with plain JavaScript in Redux. It makes it quite simpler to test and debug the application.

Now in the case of MobX, it appears to go in the opposite direction. Once more, we begin to explicitly mutate the state without reaping the benefits of functional programming.

MobX is less opinionated. But it will be appropriate to follow the best practices in MobX. Individuals ought to know how to structure state management in order to strengthen their logic about it. Or else, people prefer to directly mutate state into components.

Read More:   What does it take to develop a shopping app like amazon or even better?

To conclude the comparison of Redux Vs MobX, both the libraries are amazing. Although Redux is very renowned, MobX has become a suitable option for state management.

Why do we use redux?

Redux requires a while to grasp its trends and concepts, it’s a mix of Flux architecture and functional programming principles. If you’re a functional programmer, you might find it simpler to comprehend Redux, while if you’re coming from an object-oriented programming background, the Redux code may initially look complicated and difficult to understand.

What are the advantages of using MobX?

MobX is unopinionated and helps you to monitor your application state outside of any UI framework. This makes the code decoupled, portable, and most of all, easy to test.

How do we wrap MobX objects and arrays?

In MobX, the objects and arrays are wrapped in observable objects that conceal much of the boilerplate. It develops on hidden abstractions.