“Experience the collapse of Soviet-style Communism by playing the video games designed by angry teenagers living under it,” quipped a recent article at Vice.com.

It points readers to a surprisingly inspiring new web page promising “Playable English Localizations of Slovak Digital Games From the Late 80s Period.” Using public funding from the Slovak Arts Council, the Slovak Design Museum has teamed up with the Slovak Game Developers Association on a multiyear project to translate the Slovak-language games into English, to help make them more visible worldwide.

The organizers hope the project will give everyone from games-history researchers and gaming-industry professionals “direct contact with our gaming history.”

Even sociologists and media historians could study the material, the post argued, since the project’s  ultimate goal is to translate nearly every 8-bit computer game produced in Slovakia from the early days of personal computers — and “with the permission of the authors, freely distributable for research and non-commercial purposes.”

Besides working with a professional translator, the museum and association also got help from programming pros with “knowledge of historical works.” These pros include the games’ original creators — like Stanislav Hrda, now a sales consultant for a local distributor for Cisco network equipment, who 34 years ago wrote a “Rambo” parody called Šatochín.

But behind their online exhibit is a rich, inspiring and often overlooked story about the early history of personal computing. As Matthew Gault writes at Vice.com, “The Cold War couldn’t stop gaming from thriving in the Eastern Bloc.”

A 2020 article from Ars Technica recalled how Czech and Slovak teenagers “were among the first in the world to figure out that video games can carry political statements. They were annoyed with the Communist Party because it made it difficult for them to get computers and software. They believed the oppressive regime was snatching away their future, so they felt entitled to mock it and bend the rules.”

Or, as Hrda told Ars Technica, “We wanted to learn computer science in school, not Marxism-Leninism.”

The design museum’s blog post revealed one surprising place where games were copied and swapped: the interest groups of Svazarm, an organization with its own Eastern bloc history. Svazarm is recalled in a 2018 book called “Gaming the Iron Curtain: How Teenagers and Amateurs in Communist Czechoslovakia Claimed the Medium of Computer Games,” which describes the organization as “the Union of Cooperation with the Army,” one of the country’s largest paramilitary groups, with thousands of local organizations.

While the organization was “tasked with training young people for potential roles in the military … it acted more as a Boy Scouts club that gathered kids interested in motorsports, ham radio, model planes, electronics, and computers,” the Ars Technica piece described. 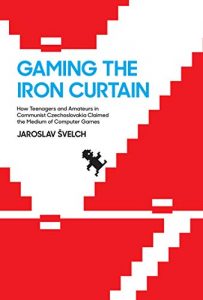 The book argues that the Czechoslovakian army “did play an indirect role in supporting hobby computing through Svazarm,” even while “hobby computing activists tended to interpret joining Svazarm as pragmatic infiltration of the regime.” (The book points out that when the young developers released games, the games’ credits “rarely” indicated their association with Svazarm and other socialist clubs.)

“Sheltered in state-supported computer clubs, local programmers fashioned games into a medium of expression that, unlike television or the press, was neither regulated nor censored,” recounted the book’s description on Amazon, ”

“In the final years of Communist rule, Czechoslovak programmers were among the first in the world to make activist games about current political events, anticipating trends observed decades later in independent or experimental titles.”

Computers Smuggled from the West

That wasn’t the only place teenagers could learn programming. The book also estimated there were more than 100 computer clubs, “at least one in every city and most larger towns.” Ultimately, more than 200 games were produced, according to the book’s description, “despite the scarcity of home computers and the absence of hardware and software markets.”

These games were “by turns creative, inventive, and politically subversive,” the description said, with game developers using “their ingenuity to be active, be creative, and be heard.”

Read More:   A Day with Intel on Hacking and Scaling Machine Learning with Open Source – InApps 2022

There were other challenges to overcome. In Czechoslovakia and other Soviet satellite states, Hrda recalled in the design museum’s blog post, “microcomputers were quite difficult for people to obtain, so they smuggled them in from the West.” (In Eastern European nations in those days, he said, computer production “was either non-existent or involved relatively underdeveloped computers with inferior specs.”)

For example, in 2020 Ars Technica tracked down František Fuka, who as a 16-year-old in the 1980s had also written his own text adventure about Indiana Jones after seeing “Raiders of the Lost Ark.” Fuka wrote the game on a ZX Spectrum computer, which was smuggled into the country by a friend’s parents “inside a diplomatic suitcase to avoid border control,” according to the article.

Fuka inspired many other teens to write their own homegrown text adventures.

In the design museum’s blog post, Hrda also recalled it being mainly teenagers and children, living “in countries with non-existent copyright protection… copying games from the West and playing them at home or even in existing computer clubs. The more skillful ones went from playing games to trying to create them.” 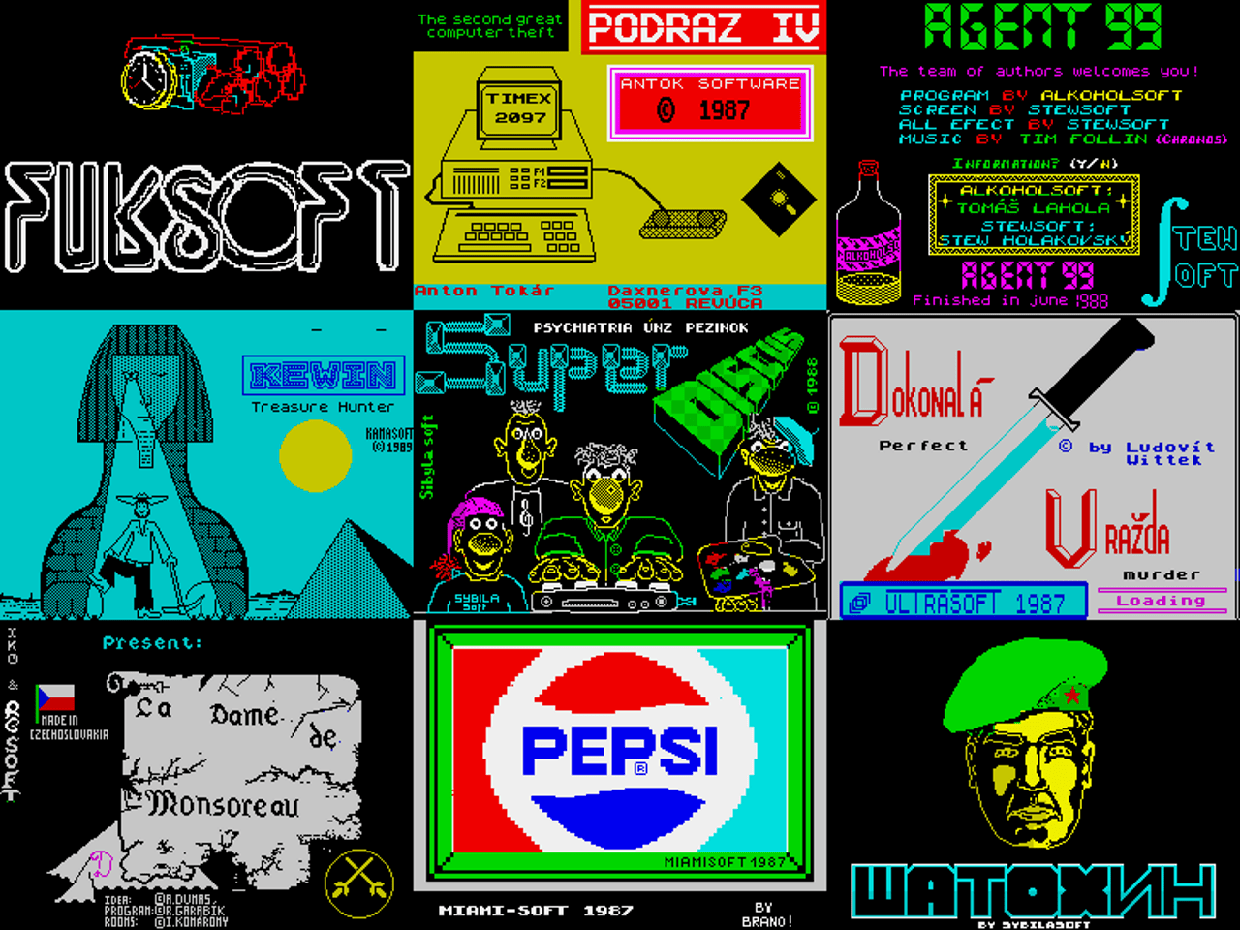 The young game creators behind the Iron Curtain had limited skills — and no chance of making money, since the games were never sold in shops. Thus, text adventures became popular, often written in the simple programming language BASIC that shipped with every home computer.

Hrda recalled fondly that writing text adventures gave these young programmers a way to imprint their fantasies onto their own characters and worlds, putting their friends into the stories and sometimes even pop-culture characters from the West that they’d seen in movies (distributed on VHS tapes), comics, books and TV shows.

“Some wrote their own science-fiction or fantasy stories in the text games, others mixed reality with a pop-cultural mix of references to things and realities that interested and fascinated the author or were the subject of discussion among the authors‘ friends,” Hrda wrote on the museum project’s blog.

But here’s where the blog post gets interesting. Hrda also recalled games that were clearly subversive towards the communist regime — describing, say, an unauthorized anti-regime protest. And in one 1988 game, Hrda wrote on the museum project’s blog, “you blow up a statue of V. I. Lenin, the founder of Soviet communism, with dynamite, and under the statue you find a gold brick that allows you to emigrate to the free West.”

One inspiration, Hrda said in the Arts Technica article, was a Soviet film in which a heroic soldier named Shatokhin infiltrates an American military base where villainous CIA agents plotted ways to disrupt disarmament talks.

It was basically a knock-off of Rambo, Hrda said. So, inevitably, he wrote a game in which the Soviet hero has to square off against Rambo himself — even though Rambo would’ve been censored in any official government-controlled media.

“[F]or the aging gerontocracy of the communist kleptocracy, the field of video games and the subgenre of home-made text adventure games were under the radar,” Hrda writes in the museum’s blog post, “and the games circulated freely, mainly among friends, without restriction or censorship, as with inconvenient books by inconvenient authors.”

The 14-year-old who drew that game’s hammer and sickle, Michal Hlavac, is now a product designer Meta’s Oculus, the company’s artificial reality lab. For Ars Technic, he recalled how the game directly mocked the Soviets. (There was even a hidden game inside the game, where the player becomes Rambo, trying to kill off his Soviet counterpart.)

The Ars Technica article described one game in which the person escaping Czechoslovakia is Indiana Jones. (“He’s fighting violent Communists, dodging water cannons, balancing on the edge of a crater, and running away from exploding bombs”) But the article also pointed out the game was released after real-world protesters were beaten and arrested by police in Prague’s Wenceslas Square.

“These individuals could not fight back in real life, so they’d later use their computers to get a fictional revenge,” the article summarized. “A Western hero, Indiana Jones, came to their rescue to teach their oppressors a text-based lesson.”

The game’s title? “The Adventures of Indiana Jones in Wenceslas Square in Prague on January 16, 1989.”It’s now playable online.

While the impact of games may have been negligible in the larger flow of history, Ars Technica pointed out that game designers like Hrda also participated in a real-world “Velvet Revolution” that led to Czechoslovakia’s non-violent transition of power.

“In those turbulent days, the game developers stepped out from behind their digitized Western heroes. For the first time, they expressed their political views out in the open, away from computer screens…