Last week Automattic, the company behind WordPress, continued its recent run of acquisitions by snapping up a React framework company called Frontity. While the acquisition itself was primarily an “acquihire”, since Frontity’s technology is open source, it also revealed something about Automattic’s plans for WordPress going forward. It’s clear that Automattic now sees WordPress as not just a content platform, but a development platform too. What’s more, a development platform that embraces the “headless CMS” approach — which, as I’ll explain in this article, is a usage of WordPress that hasn’t always been advocated by Automattic.

To find out more about how WordPress might benefit from Frontity’s technology, I reached out to Frontity co-founder and CEO Pablo Postigo.

“In my opinion, WordPress has always been a web dev platform,” Postigo told me. “Thanks to the WordPress extensibility patterns, you can take advantage of third-party plugins or themes.”

That may be so, but it does seem that Frontity has upped the ante on how people develop for WordPress. Mullenweg himself acknowledged this last October when he name-checked Frontity in a debate with Netlify founder Matt Biilmann. “[…] there’s things like Frontity that allow you to build WordPress [with] serverless pre-rendering using React,” Mullenweg had said, as a counter to Biilmann claiming that developers are no longer interested in the WordPress ecosystem.

What Postigo and Herranz have created is a React framework for WordPress, which launched in 2019. It allows developers to build a React app that uses WordPress as a so-called “headless CMS.” In other words, WordPress itself is just used to create and manage the content — it’s no longer a part of the design or publishing processes. Instead, Frontity accesses the content via the WordPress REST API, and then “generates the final HTML that is displayed in the browser using React.”

This can result in faster page loading times and offer more flexibility in terms of presentation, but it also complicates the publishing process. As explained on its architecture page, a Frontity project “will always require two servers”: the normal WordPress server running PHP for the content, and a Frontity server running on Node.js for the presentation and publishing. 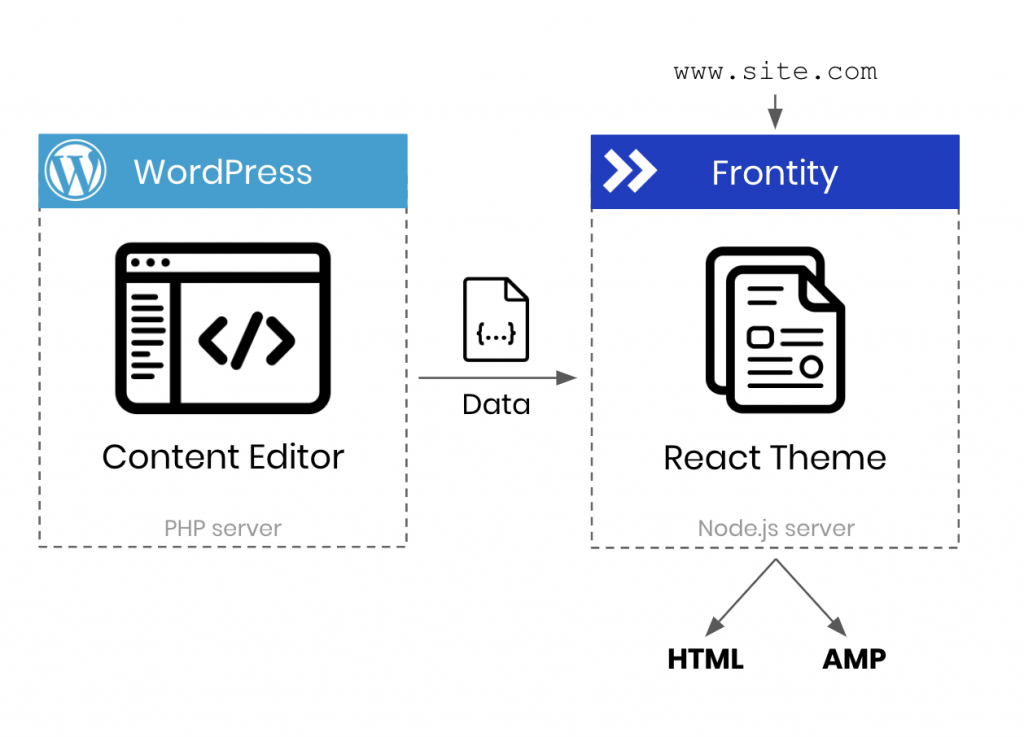 As you can see, a key aspect of Frontity is that it only uses WordPress for the content — which has become known in the industry as a “headless CMS” approach, because it separates the frontend (presentation) from the backend (content). Headless has become more popular in recent years partly due to the rise of the Jamstack architecture, created and popularized by Netlify, which includes headless CMS in its stack.

Matt Mullenweg has been famously skeptical about both Jamstack and the headless CMS concept. Back in September 2017, he opined on Twitter that “I will take a long bet against anything branded ‘headless.’” But he seems to have come around to the benefits of headless CMS since then, at least judging by the Frontity acquisition. In his blog post about the Frontity news, Mullenweg wrote that “I believe there’s still a lot that we can learn from decoupled systems and we can incorporate those learnings into WordPress itself as we emphasize performance, flexibility, and ease of development.”

It’s worth noting here that WordPress VIP, a managed service for enterprises that is owned by Automattic, includes a headless option — although it cautions that “one of the inherent disadvantages of headless CMS is complexity.” Others in the WordPress industry have made similar moves towards headless. WP Engine, a competitor of WordPress VIP, announced its first headless WordPress service in March, called Atlas.

The Role of JavaScript and React in WordPress

Although Automattic seems to have accepted the headless trend somewhat reluctantly, it’s less of a surprise that it is interested in integrating React more into the WordPress ecosystem. React has now overtaken jQuery as the most commonly used web framework, according to the latest Stack Overflow developer survey. So if WordPress has designs on being “the best development platform on the web,” it makes sense to target React developers.

Plus, the most important piece of the modern WordPress was built using JavaScript and React: Gutenberg, the modular editing interface. As Postigo explained, “with Gutenberg everything inside the content is now a block, and those blocks can be designed and extended with React.” What’s more, developers can create new types of blocks using React (or JavaScript, more generally).

The Gutenberg project already offers a development platform, consisting of “a set of JavaScript packages and tools that you can use in your web application.” So the Frontity founders will no doubt be looking for ways to extend that.

This is all a continuation of the gradual shift in emphasis in the WordPress ecosystem from PHP to JavaScript, which began back in November 2015 when Mullenweg announced a new JavaScript-based WordPress codebase. JavaScript, React and APIs have ruled the WordPress world ever since then, but the Frontity acquisition adds even more grist to the JavaScript mill.

Although, according to Postigo, this doesn’t necessarily mean that React will be brought into the WordPress interface.

“Currently, React is used in the Block Editor UI (in the admin side of WordPress). But this acquisition [of Frontity] doesn’t mean that we will bring React to the WordPress PHP or full site editing themes, nor that Frontity Framework or any substantial part of it will be merged into WordPress.”

Leaning into Headless and Other Web Dev Trends

WordPress sometimes unfairly gets criticized for its innovations. The Gutenberg interface has been controversial in the WordPress community, but despite its occasional quirks it is undeniably the right UI for the modular web world we now live in. Likewise, in the 2020 Stack Overflow developer survey, WordPress was singled out as “the most dreaded” platform (although it went mysteriously unmentioned in this year’s survey).

Despite the kickback, Automattic has shown it is all-in on modern web technologies — even to the point of embracing a use of WordPress it would rather have avoided if possible (headless CMS). This Frontity acquisition is another example of leaning into the general shift towards decoupled and JavaScript-powered web frameworks. I’ll be interested to see what impact the Frontity creators have on Gutenberg going forward.

InApps Technology is a wholly owned subsidiary of Insight Partners, an investor in the following companies mentioned in this article: Automattic.

Photo by Magda Ehlers from Pexels.