“It’s all about equipping mobile developers and testers with as much big data, analytics and insights as possible to make the right decisions to push applications out quickly, then constantly monitor user experience so you can get ahead of potential problems downstream,” said Kelly Emo, director, lifecycle and quality product marketing, HP.

The centerpiece is HP App Pulse Mobile, which monitors and analyzes performance, stability and resource usage on mobile apps. It provides a “FunDex” score that provides a top-level view of problems. The score starts at 100, but drops with each problem the app has, explains Eric O’Dell, senior product marketing manager for application performance management at HP. 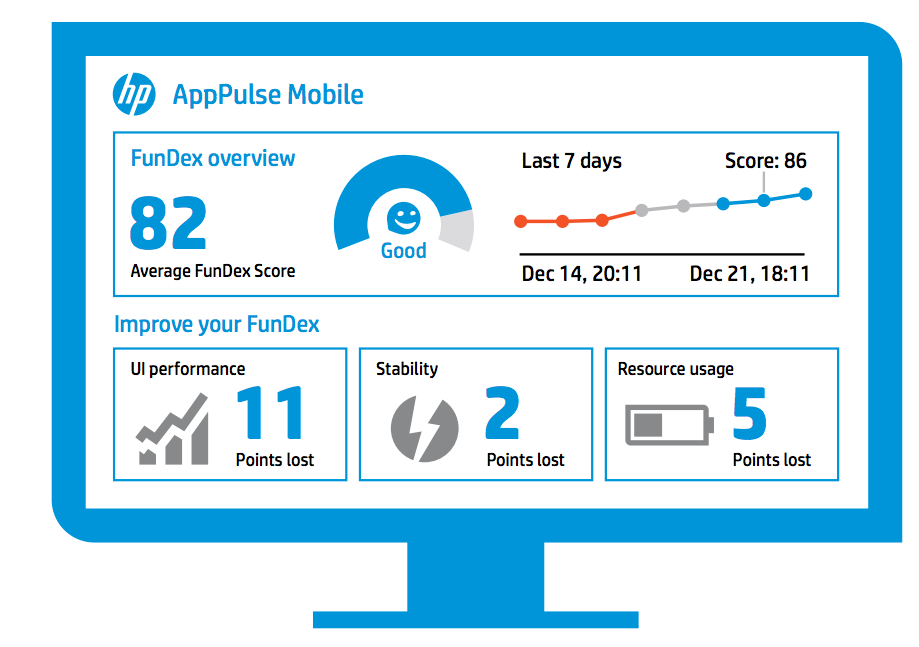 You could see it’s lost 8 points to crashes, 12 points to slow load times, 4 points to heavy battery usage. It looks at the screen where problem occurred, identifying the OS and the device.

“It will tell you that when they clicked on this button, it was on Gingerbread and the Samsung,” he said. “You can drill down even further into the exception code and receive information on the stack trace. So now you’re looking at the specific issue and you know exactly how many users have been affected by that crash.”

Read More:   Why Intuitive Troubleshooting Has Stopped Working for You – InApps 2022

If you know there were 3,000 users affected, you can prioritize the fix over an issue that affected only 100 users.

“You can share that crash log with the development team with information down to the line of code, [saying] ‘This OS, this device, this line of code — let’s fix that now,’” he said.

In addition, a new version of HP Mobile Center provides a software-driven capability to test across devices supporting both native iOS, Android and hybrid applications, including common JavaScript frameworks such as JQM, Angular and Sencha. It’s been integrated with new releases of HP LoadRunner and HP Performance Center, incorporating technology from the acquisition of network virtualization startup Shunra to provide a lab of network behavior characteristics.

“You can infuse your test with any network — 2G, 3G, certain locales, high-speed wireless — and you can see what that network does to the overall performance of your application. Does it have jitter? Does it cause your application to stall? You can make performance changes before production,” said Emo.

In addition, the company announced:

It’s not clear who, though, outside of enterprises heavily invested in HP products, would use these tools.

“All the big tech players are in mobile, and they’re trying to figure out what their particular niche is going to be, but I think there will be a refining, if you will, of the landscape of the big behemoths in mobile,” said Jeff Corbin, founder and CEO of APPrise Mobile, a New York City-based company focused on empowering business units to create their own apps.

One of HP’s problems, according to tech analyst Rob Enderle, has been that it produces a lot of disjointed tools that customers have to figure out how to put together.

“An announcement from HP looks like a shotgun blast of stuff while competing companies tend to lead with the solution and back into the components, which is a far better and more customer-focused sales process,” he said.

The new tools will offer a big advantage for current HP customers using testing tools and lifecycle management, but independent shops can get immediate benefits as well, Emo said. AppPulse Mobile, which is available for a free trial, and Mobile Center can be plugged into their testing environment with no dependencies on other HP products, she said. HP offers workshops and professional services to support clients in using the products.

HP launched its Helion cloud platform, based on its work with the OpenStack, in May 2014. The big data platform Haven runs on the HP Helion cloud and combines technologies from various HP acquisitions over the years, such as Autonomy, Vertica, Operations Management and ArcSight.

HP in February announced Haven Predictive Analytics, based on its version of the open source language “R,” known as Distributed R.

HP also offers its own platform as a service (PaaS) technology called the Helion Developer Platform, plus Helion VPC Lean, a cloud service for midsize businesses looking to move app development, testing and other work to a managed infrastructure as a service (IaaS) environment.

The company missed revenue targets in its most recent quarter and lowered its annual earnings forecast. While sales were flat to lower in almost all product areas, its mobile development offerings have been among its better-performing development products.

CEO Meg Whitman has said it’s on track with its multi-year turnaround and its plan to split into two companies by November. She also said it will continue to invest heavily in research and development and in acquisitions.

HP is a sponsor of InApps.