You can find content about Off-The-Shelf Hacker: Exploring the Embedded Linux Conference in Portland from the Wikipedia website

One of the best things about Portland is how easy it is to get to conferences from the airport. Just jump on the Red Line light rail at the airport and jump off at Pioneer Square for $2.50 and about 30 minutes of travel time.

I learned this because earlier this week, yours truly was attending the Embedded Linux Conference, held at the downtown Portland Hilton. The event brought about 800 attendees together for a few days of education, inspiration and collaboration. About two dozen vendors had booths, including Intel, Yocto Project, Linaro, Microsoft, SuSE and others.

The conference was hosted by the Linux Foundation. They sponsor the work of Linux Torvalds, as well, who oversees Linux kernel development. The Linux Foundation covered my travel and lodging expenses for this trip.

Interacting with other attendees is always a treat, for me, and this one was an excellent mix of hardware, software and developers of all stripes. A few people mentioned that they read my “Off-The-Shelf Hacker” column, which is great. And people seemed to enjoyed my tried-and-true technique of handing a CHIP or ESP8266 module to them, to break the conversational ice (Editor’s note: Ask Dr. Torq to demonstrate this maneuver, should you happen to meet him).

For the headline keynote on Tuesday, Torvalds was interviewed by Dirk Hohndel, the chief open source officer of VMware.

Torvalds seemed happy with where Linux is today. The main message I received was that the Linux kernel would continue to stay on a predictable, “general” operating system path. Kernel development and releases have matured into a smooth operation, without the crazy fire-drills of the early years. New functionality has to be safe to integrate into the system without causing major breakage in peripheral areas. It’s still a massive job.

Wednesday morning, Guy Hoffmann, a long-time robotics expert from Cornell University, gave a talk about the emerging new smart-home interface of the social robotic companion. These robots use movement and gestures to tap into the natural, everyday emotions in humans. He’s developed robots that interpret a human’s body language or behavior and can adjust its responses on the fly.

Hoffmann said that body language will be a key part of the robotic experience and help avoid disruption of emotional balance, in the coming smart-home environment.

AGL is focused on tailoring Linux for automotive applications, so auto manufacturers don’t have to build auto operating systems from scratch. Right now it focuses on the entertainment and navigational duties of an in-car Linux system. Cauchy has plans to head into other areas like autonomous driving at some point down the line.

AGL will get manufacturers about 80 percent there with a standardized and robust operating system. They then can write their own code or use third-party vendors to fill out their products and service lines. A total of 91 companies are in the AGL consortium now, including such industry icons as Toyota, Honda, Nissan, Ford, Mercedes and others.

Using AGL could help a company keep down development and product costs. For example, where today an instrument cluster has its own microcontroller to capture data from sensors or other onboard computers, AGL might pull in all the data, organize it into a nice GUI, and output the instrument display to a color LCD through HDMI. The touchscreen would use a standard interface to AGL, as well. That eliminates the need for a separate microcontroller for the instrument cluster.

Elsewhere at the conference, Mike Anderson, chief technology officer and chief scientist for the engineering services company PTR Group, gave an interesting overview of running Amazon Alexa under Linux. Anderson mapped out the steps, similar to a recent story I wrote. He used a BeagleBone instead of a Raspberry Pi. He pointed out that getting the service running on a small single-board computer required a lot of steps, although it was fairly reliable, once set up.

Another interesting breakout session was conducted by Will Lyon, a developer relations engineer for graph database company Neo4j, covering the topic of graph databases. Lyon didn’t go into any depth at all about embedded hardware. Instead, he pointed out that you need to be able to extract the value out of the tons of data not only coming in from edge Internet of Things devices, but also big data sets up in the cloud. That’s the job of graph databases. Using well-known matching and querying techniques, graph databases can be used to find patterns that explain behaviors and create interesting mashups that people can use to adjust systems, change operations, and optimize processes. You might say it’s where the Internet of Things meets Big Data.

On the Show Floor

I was particularly interested in one of the vendors on the show floor, Opto22, from an Off-The-Shelf Hacker perspective. 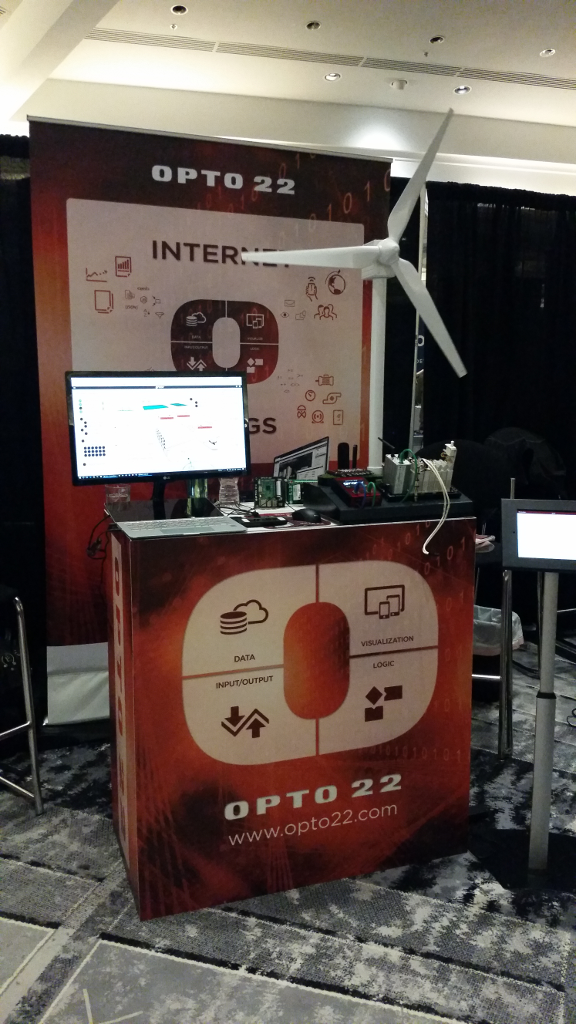 Opto22 sells industrial control modules. One of its long-running products is a controller bus board where you plug in all kinds of input and output modules. They are standard modules, similar to what’s offered in the old Allen-Bradley programmable logic controllers, for jobs where you need to turn on a small motor or some kind of output device or use a relay module.

An Opto22 module might cost $10 and simply plugs into the bus board. Opto22 also has an industrial-hardened controller that goes with the bus board and modules.

The company has put millions and millions of these input/output points (modules), out in the field. The modules control parts of power grids, dams, manufacturing processes and one-off industrial control jobs, all over the place. Little inside baseball (hint, hint): Many of the modules are available, used, on eBay.

One cool thing about these modules is that they have a Raspberry Pi breakout board that works with the bus board and input/output modules.

Now, of course, the Pi isn’t quite what you’d call truly industrial strength, as far as being able to put it on a production manufacturing floor goes. Shop floor controllers have to be able to withstand strong electrical and magnetic fields, physical vibration and shocks, not to mention extremes in temperature, humidity and other environmental factors.

So, this breakout board is for customers who want to explore if a Linux single-board computer will satisfy their control requirements, using common Linux-based tools. The bus board is set up as an extension to the GPIO pins on the Pi. Programs may be written in C or Python, for example. Octo22 has a Node-Red implementation too, if you want to go the visual programming route. Check out its Raspberry Pi kit.

I also wanted to mention, warpx.io. The company sells a wearable/Internet of Things embedded platform that’s about the size of a stick of gum. It runs a 1GHz ARM chip with 512MB of RAM, 4GB of Flash, and WiFi and BlueTooth. It also sports the Yocto embedded Linux distribution.

A warpx.io rep said it uses cell phone-like fabrication techniques to put that kind of processing power into such a small package. Naturally, there’s access to the general purpose input/output pins, UART, SPI and I2C connectivity, through developer adapter boards or a custom daughter board.

I’m working on getting my hands on one of these bad-boys, for an Off-The-Shelf Hacker review.

So, there’s a quick snapshot of things I saw at the Embedded Linux Conference. It was quite a mix of talent, both with attendees and speakers. The vendors were knowledgeable and interesting. And, the venue was great. Slides, bios and overviews are available on the website. I’m planning on expanding a few conference-derived topics and doing some reviews as vendors respond, for future OTSH articles.

I’d definitely put this conference on the list for next year.

InApps is a wholly owned subsidiary of Insight Partners, an investor in the following companies mentioned in this article: Shelf, Torq.