Perspica aims to solve the problem of too many IT operational analytics silos, by offering end-to-end intelligence across the application software stack, one that uses techniques in machine learning to connect disparate sources of information.

The company recently launched its Incident Replay, a DVR-like SaaS time machine that allows users to go back and replay an infrastructure incident. And it just announced integration with Amazon Web Services to extend its operational intelligence offering across hybrid environments.

The company claims to assemble a program that uses a set of “best-of-breed machine learning algorithms that characterize IT operations,” Sahai said. That software profiles all the objects in the environment, to learn what’s normal and what’s not normal.

“Every object has a behavior that changes over time. Knowing what’s a true alarm and what’s a false alarm is very important,” Sahai said. “You need to know only when there’s a real problem. You do that by looking at the history as well as the changes in behavior.”

It issues what it calls “intelligent alerts” and recommendations about what to do about problems, Sahai said, who added that on average, it reduces alarms by 96 percent for its customers.

One customer has been the federal government, which uses the software to monitor more than 6,000 data center elements. That project will be scaling to six million objects by the end of the year. One of its key benefits has been reducing the time its staff spends on lengthy root-cause analysis reports, which used to take nearly a week, but now are generated automatically from Perspica. 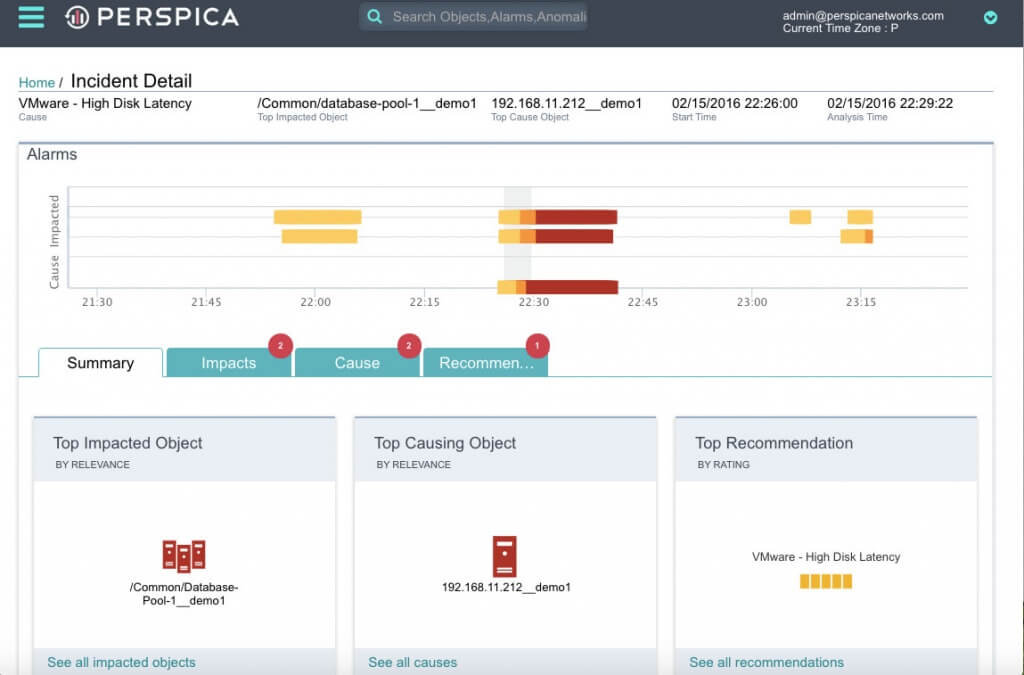 The company also cites an unnamed Las Vegas gaming company as another customer where it monitors the performance of more than 1,500 VMs and will be expanding that to around 5,000.

The technology focuses on past, present and future behavior.

“Root-cause analysis is difficult because there are so many million objects. Where you start looking for the causes?” Sahai said. It maintains an ongoing view in the present at what’s developing and can help ward off future problems before things go out of control.

A side benefit is improved staff productivity.

“Staff get tired of chasing false alarms. That leads to a lot of firefighting and reactive management,” Sahai said.

Founded in 2014, Perspica’s team comes from companies such as SAP, HP, Cisco, Dell and startup ventures. Last June, it raised a $4 million in Series A led by March Capital Partners and is looking into a Series B, Sahai said.

It’s vital for analytics vendors to take their services to the public cloud as companies increasingly divide their infrastructure between public and private clouds and legacy infrastructures, according to Dennis Drogseth, vice president of analyst firm Enterprise Management Associates.

“Perspica’s rich combination of analytics and topology for service dependency insights is a perfect fit for helping to manage and optimize critical business applications and their supporting infrastructure in this hybrid world,” he said.

Five analytics “really are our secret sauce,” Sahai said. It goes through the applications, the application infrastructure on the virtual and physical layers, collects all the data, then does the file analytics on top. In hybrid environments, you can have applications that are federated — some running on VMware, some on Amazon — and run analytics across them.

He explained the five types of algorithms it employs in this way:

This is all can apply to a development environment as well as operations, he said.

The company added Docker support in its latest version and going forward plans to add more features to support developers in container-based environments he said. It’s also looking to add other clouds such as Azure and Google Cloud.