Update The Commute of the Future: What the Data Shows

Read more about The Commute of the Future: What the Data Shows at Wikipedia

You can find content about The Commute of the Future: What the Data Shows from the Wikipedia website

Fortunately, it’s now possible to collect data on our travel patterns — offering a more detailed glimpse into the sources of traffic congestion, and hints of the possible solutions. So what will the commute of the future look like?

CNN recently got a glimpse of one possible scenario — courtesy of Lyft.

“Want your city to fix its traffic issues? It should start by narrowing streets and planting trees…” argued a recent CNN headline, while the article praised “the overlooked secrets of good urban design.” Working with transportation consulting firm Nelson/Nygaard and architecture firm Perkins+Will, Lyft tried to re-imagine the street of the future. Turning their attention to Los Angeles’s Wilshire Boulevard, they’re proposing protected lanes dedicated to cyclists, lanes for (autonomous) buses — and, of course, a dedicated “loading zone” for ridesharing vehicles (like Lyft’s).

By making the lanes narrower, there’s room for wider sidewalks, with comfy benches and welcoming “landscaping” to encourage more walking (and walking to public transportation). “The best way to make driving possible is to make it easy for drivers to do something other than driving,” says Jeff Tumlin, director of strategy at Nelson/Nygaard. He tells CNN that currently, 68% of Los Angeles drivers are riding alone, taking up 10 times as much road space as alternatives like biking or bus-riding. 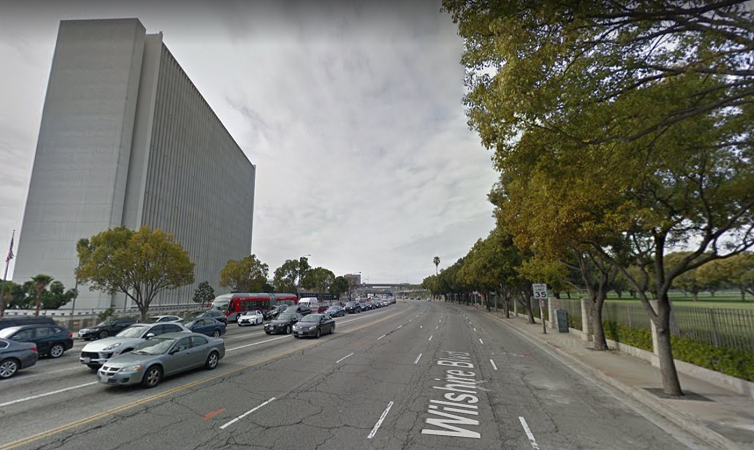 They predict that their re-design of Wilshire Boulevard could transport four times as many people — while only doubling the number of vehicles. Look closely at CNN’s infographics, and you’ll see the number of bus riders increasing from 3,800 to 35,000 (along with 7,500 new bike riders, and 22,000 more pedestrians).

LA drivers spend more time in traffic than any other city in the country. What would you do with your #100Hours back? pic.twitter.com/PjOUUE31NZ

Lyft has partnered with the Southern California Association of Governments (representing six counties and 191 cities) “to make this vision of smarter streets a reality.” And to promote their commitment to better commutes, Lyft is discounting rides by 20% in the whole Los Angeles area for all of October. In the fight against traffic congestion, “The company, not surprisingly, believes it should largely start with carpooling,” CNN writes.

But others think ridesharing services may be part of the problem.

Bruce Schaller, a long-time transportation consultant and a former senior transportation official with the city of New York, decided to look at the data. New York already required data on cab rides and had expanded that requirement when ridesharing services came to town. Utilizing datasets on fleet size, trips and mileage to identify the impact of ridesharing apps, he pulled together what he describes as “the first detailed, comprehensive and data-driven look” at the expansion of ridesharing services (or “Transportation Network Companies”) in a major U.S. city.

It examined trip logs from both taxi cabs and ridesharing services (as well as weekly summaries from the Taxi and Limousine Commission), plus taxi cab licensing fees and vehicle mileage inspections. It also included statistics from New York’s Metropolitan Transportation Authority about the number of people riding buses and subways, plus bike ridership figures from the New York Department of Transportation. It even included data on the number of ferry rides from the Mayor’s Management Report. Finally, it used a survey by the New York Metropolitan Transportation Council about household preferences for personal travel. Schaller revealed his results earlier this year.

Though people often assume ridesharing reduces congestion, “The results of this analysis points out that the picture is much more complex than that discussion assumes.” At least some of the extra miles driven since 2013 are coming from ridesharing drivers traveling from one paid fare to the next — driving that wouldn’t have happened if people were simply driving their own cars. But in addition, ridesharing services seem to be encouraging people not to take mass transit. In March the New York Times reported that even though the city’s population was increasing, subway ridership had dropped for the first time since 2009.

Meanwhile, more than 60,000 drivers are now prowling the city for ridesharing services — more than 46,000 for Uber (“though they may also work for other services too.”)

Calling them the leading source of increasing travel in the city for people who didn’t own their own car, Schaller notes that even if you subtract the riders who’d used to take cabs (and other private car services), there were still 31 million additional trips (and 52 million passengers) taken since 2013 that his report attributes to ridesharing apps — representing an increase in miles traveled somewhere between 14% and 19%. He concludes that most people using ridesharing apps had previously been walking or biking, or taking public transit — and in each of those cases, ended up putting more cars on the road. Yes, some of them also would’ve hailed a cab, but many others made a trip that they otherwise might’ve just skipped. 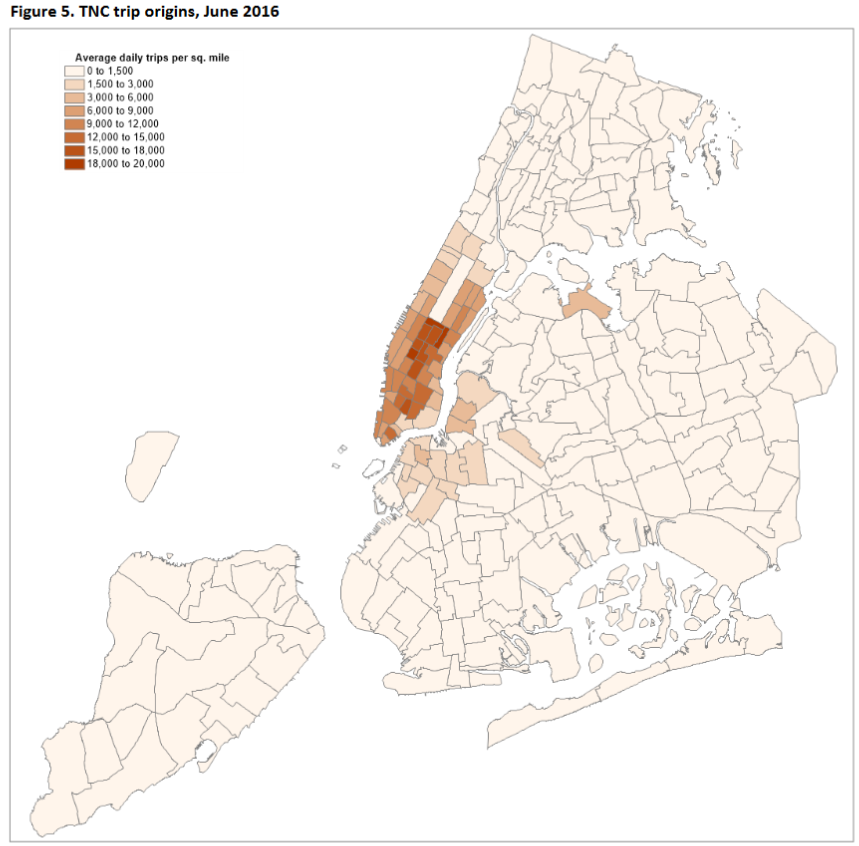 And Schaller’s report also concludes that there’s “no sign of it leveling off.” The number of people carried by ridesharing services tripled in New York within 18 months — and put an extra 50,000 vehicles on the streets. On an average day last October, Uber provided 226,046 rides, with Lyft providing another 35,908. Over three years they’d already accounted for over half a billion miles.

And the New York Times reports that travels speeds in New York are now 12% lower than they were in 2010.

A Lyft spokesman told the Times that the company’s goal was “to replace private car ownership, not transit, walking or biking” — but consumers have their own ideas. Schaller also cites a 2016 study in three San Francisco neighborhood that found only 7% of people using ridesharing apps would’ve driven their own car if the apps weren’t available, while a whopping 43% would’ve walked, biked, or used public transit (thus creating less congestion).

Schaller’s conclusion? This trend “is not a sustainable way to grow a city.”

The title of his report was “Unsustainable?”

He tells other cities that the growth of ridesharing apps is related to the attractiveness of their current transit options. The silver lining? The data from ridesharing services “brightly illuminate” what the public wants from transportation services, and provide a seemingly irrefutable argument behind the need to meet the public’s demand for fast, reliable, comfortable and affordable transportation service.

The Times points out that city officials in Summit, New Jersey offered discounted Uber rides to their transit station rather than building a new parking structure.

The Times even reports that some cab drivers have defected to ride-hailing apps, “resulting in so many taxis sitting idle in parking lots and garages that they have become known as ‘taxi graveyards.’” As a side issue, the city is also losing money from the sale of taxi medallions (and their 50-cent surcharge on taxi trips). Meanwhile, a senior fellow at the Manhattan Institute said the fares from ridesharing apps were being artificially lowered by the subsidization of venture capital cash. (By April Uber had raised $8.8 billion, TechCrunch reports, while Lyft had $2.61 billion.) The fellow told the Times that ridesharing apps were just making it easier to travel by the “most inefficient mode of transportation possible.”

So why do people assume ridesharing services reduce cars on the road? The Times points out that Uber and Lyft both have their own carpooling services — UberPool and Lyft Line. But Schaller’s report notes that though ride-hailing services are offering carpooling options, “exclusive ride trips still predominate.” His ultimate conclusion? “Shared trip-making through options such as UberPool, LiftLine and Via will not necessarily mitigate mileage increases.”

What’s going to happen when we all have self-driving cars? A breakout in Schaller’s report notes that autonomous vehicles could increase the number of rides even more (thus increasing congestion). But it also argues that we’re already getting a glimpse of a future with self-driving cars — since ridership is already increasing thanks to the demand-responsive availability of carsharing options — even if these cars are “driven by actual people.”

But people are taking a closer look at the problem — and they’re using data to do it. Inrix, a SaaS (and DaaS) company offering real-time traffic information and analysis, recently looked at traffic data from 1,064 cities in 38 countries. Their conclusion? America had 11 of the 25 worst cities for traffic congestion — making it the worst country for traffic congestion. Their February report called out Los Angeles as the world’s most gridlocked city. (Followed by Moscow, New York, San Francisco, and Bogota.)

Hopefully, city planners of the future will be able to make better choices.

Top reasons to make you believe that Swift is preferable language for iOS app development is an article sent to you by the InApps editorial team. Hope…

Solution Analysts Ranked Top Software Development Company by GoodFirms is an article sent to you by the InApps editorial team. Hope readers will have more useful knowledge…