Update Why the Redis Ecosystem is Flourishing

Read more about Why the Redis Ecosystem is Flourishing at Wikipedia

The in-memory, key-value data store Redis continues to consolidate its market position as more applications seek to use the open source project as a data structure server for on-the-spot, real-time application processing.

Cloud hosting infrastructure provider Rackspace is seeing a particularly strong upsurge at present, according to Matthew Barker, product manager at Rackspace, who says that “it is growing rapidly as customers rip and replace Memcached and the proliferation of real-time applications grows.” Earlier this month, Rackspace hosted RedisConf 2015 in San Franciso at the Palace of Fine Arts. About 250 people attended the conference.

Rackspace’s perspective represents a trend observable across the database market. Database ranking website DB-Engines ranked Redis as the 10th most popular database management system in March, up from the 13th position a year ago. 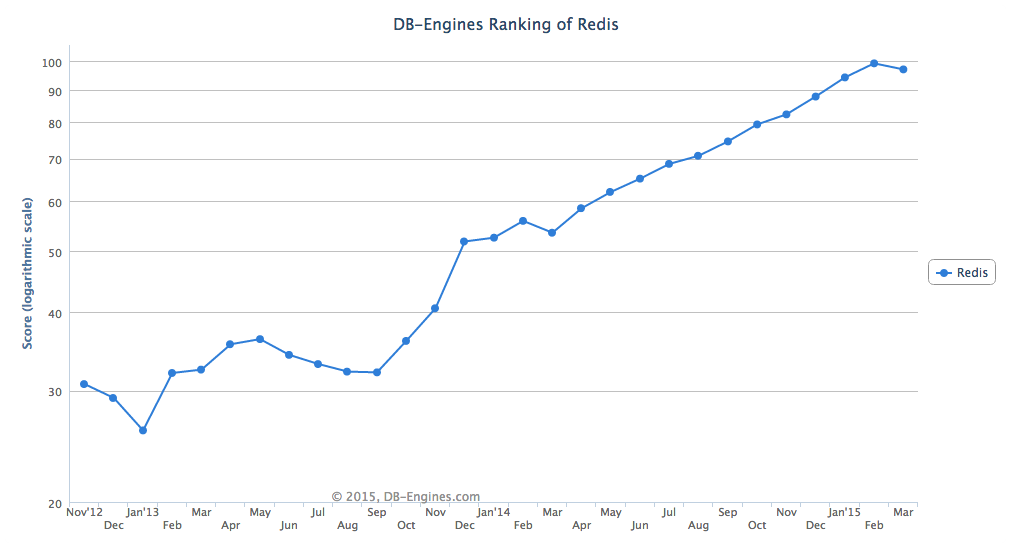 DB-Engines calculates Redis’s popularity based on a number of factors, including number of positions advertised that specifically request Redis expertise, tweet and news mentions, Google Trends interest and discussions on key tech forums, such as Stack Overflow (which coincidentally uses Redis as part of its stack — as a caching layer for the entire Stack Overflow network).

As an in-memory datastore, more businesses are turning to Redis as they scale their applications in order to carry out quick processing tasks in memory. This is akin to providing a real-time sandbox for ‘hot data’: data endpoints that are in flux as they go through loops of read-write processing before being finalized.

This is how content management API service, Contentful, uses Redis in their stack, according to cofounder Paolo Negri. Contentful is a platform-agnostic content management system that delivers content to any device via APIs. Current customers include e-commerce sites like Nasty Gal and longstanding media empires like Playboy. While their content is stored in data servers, during the editing phase, content is copied to Redis to allow real-time editing of the content before it is saved back into a more permanent datastore. “At the moment, we are using Redis as a temporary datastore, for very hot data, and from that point of view, it works very well. Then as soon as customers finish the editing process, their content goes to Elasticsearch and, ultimately, into our AWS infrastructure.”

Negri has been using Redis in a variety of IT roles pretty much since its creation in 2009, when he first played around with creating a few experimental libraries. But in 2011, at gaming platform Wooga, he looked at Redis more seriously as a replacement for MySQL. “In the beginning, we moved just a small part of the data and then more and more of the data of our games onto Redis. For us, it was a tool that allowed much higher performance than MySQL.

The real-time nature of gaming applications is making it a common use case for Redis. Barker from Rackspace says “a number of gaming companies are using Redis for their leaderboards.” (He also points to other leaderboards, such as up and down voting of articles on blog sites as another example of Redis in popular use.)

Ankur Bulsara, CTO at games company Scopely, has doubled down on using Redis, moving from the open source project to signing with the enterprise provider Redis Labs. Scopely currently has four number one games in the app marketplace, has “had somewhere over 30 million installs of our games,” with some of their largest games making two billion API calls a week each, “with some seeing 40-50,000 requests a second,” Bulsara says.

“We started using Redis for the same things that attract a lot of people to Redis: leader boards, in-memory, sorted sets and social apps.

“Philosophically, we like to let Amazon manage as much as possible, so when Amazon used Elastic Path with Redis, we switched to that. Then we met Redis Labs at AWS Reinvent, and they looked like they had a compelling suite over Elastic, in particular, they offered us a one-click way to manage our size. We were used to AmazonDB where we didn’t have to manage node size, so now we can use Redis Labs like an API.

“We use DynamoDB a lot as a primary datastore, then Redis for things like task or current features or to power a real-time events system. We use some Memcached, but increasingly we are looking at Redis for our caching solution, and we are slowly weening ourselves off MySQL and Redshift as our analytics database.

“We have a number of stacks globally, we make our own games as well as publish games, and they have different requirements and the stacks are configured slightly differently. Generally, we are using Ansible and CloudFormation Playbooks for our configuration systems and from that we can configure DynamoDB tables or other things.

“One good example is we use Redis Labs as an analytics platform for real-time alerting, and we use the new hyperlog log feature to activate user count. Features like that have allowed us to increase our usage of Redis Labs beyond what we were originally pigeonholing it for.”

While gaming may seem like a specific vertical, the real-time nature of its application needs point to some of the ways that other industries are making use of Redis’s in-memory datastore capacities. Barker points to the use of leaderboards beyond gaming use cases to things like up and down voting of articles as another example of how Redis is being used.

As Redis continues to strengthen its positions as a cache database store for business technology stacks, the ecosystem surrounding the open source project spans outward. The two main ecosystem streams that flow outward from Redis use in the tech stack are:

In addition, a third ecosystem stream is emerging:

As an open source project, a number of other tools are sprouting up around Redis to extend its functionality for particular use cases.

Chief among these is message queuing, a use case that Rackspace itself uses internally with Redis. Tools that harness Redis’s in-memory, cache capabilities for real-time message queuing include:

Other tools that are cropping up to empower Redis users include:

Marko Martinovic, a back-end developer specializing in e-commerce platforms, sees Redis solving many of the scaling problems that face e-commerce businesses as they begin to grow. In a post last year on using Redis as a cache back-end and for session storage, Martinovic notes that more common solutions like APC and Memcached begin to flounder once website visits and shopping sessions start to scale. Limitations, like not being able to tag groups of related cache entries, further exacerbate the use of other data storage cache options when the volume of transactions begins to be a factor in architecture decisions.

Their scenario is not dissimilar to why Redis has seen a similar uptake used to manage WordPress installations. In December last year, Scott Miller from Digital Ocean posted a tutorial on using Redis to configure Redis caching in order to speed up WordPress page loading, halving the load time with Redis. With Redis, “The result is a WordPress site which is much faster, uses less database resources, and provides a tunable persistent cache,” writes Miller.

As more platform-oriented SaaS products reach maturity and build a customer base, Redis may well become an essential stack component as both a cache and in-memory store, as has already happened with WordPress and is currently occurring with Magento.

Rackspace and Datadog are sponsors of InApps Technology.