What Are The Reasons To Learn Express.js in 2022? 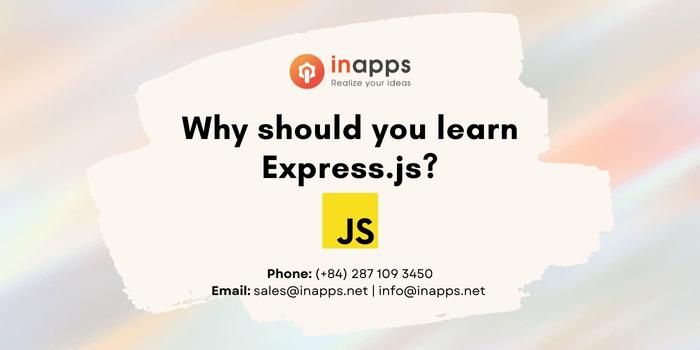 Express.js is a server framework for the Node.js web application that is designed especially to create single-page, multi-page, and hybrid web applications. For node.js, this has become the standard server system. Express is the backend portion of a component known as the MEAN stack.

The MEAN is a free and open-source JavaScript software stack for developing interactive websites and web apps which has the following aspects;

ExpressJS is a prebuilt Node.js framework that can enable you to develop quicker and more intelligent web applications on the server-side. Some of its features are accessibility, minimalism, versatility, and usability, and since it is created in NodeJS itself, its efficiency has also been acquired from NodeJS.

To sum up, whatever it is that Bootstrap does for HTML/CSS and responsive web design, ExpressJS does for NodeJS.

It made programming in Node JS a cakewalk and gave developers some extra features to expand their programming on the server-side. ExpressJS is the most popular Node JS framework till now.

Before diving into the many reasons to learn Express.js, let us first go through its advantages.

Planning to learn Express.JS? Here are the reasons why you SHOULD!

Let’s say you are using Express.js for Back-end Development. We have rounded up the top reasons why you should.

1. Improves scalability of the application

2. Same language can be used for both backend and frontend

Another advantage of making use of Express.js is that with the aid of JavaScript, you can do both frontend and backend coding. While there are many similar frameworks, they provide different frontend and backend language support, which makes it very difficult to deal with. But with Express. JS, you’ll rarely encounter any such issues.

The caching function is provided by Express.js, and the benefit of it is that you will not have to re-execute the codes over and over again. In addition, it will allow the web site to load quicker than ever before.

Express. JS is a full-stack JavaScript that does not require you to employ numerous developers to manage a web application’s frontend and backend. Thus, it allows you to cut a lot of costs on the development and maintenance of the app.

5. It increase the efficiency and performance

As it facilitates non-blocking I/O operations, the speed of code execution is also improved by the runtime environment.

6. It has a support of large and active community

Node.js is privileged to have a wide and committed group of developers who continue to contribute to its ongoing growth and progress on a regular basis.

In fact, the developer groups are well assisted by JavaScript developers who provide GitHub with ready-made and easy solutions and codes. The developers are expected to initiate several more developers in the future.

Since Node.js provides the choice of non-blocking I/O systems, it allows you to process multiple requests simultaneously.

The framework can manage the efficient handling of concurrent requests better than others, like Ruby or Python. The incoming requests are positioned and are launched rapidly and systematically.

Node.js is considered to be highly extensible, which implies that Node.js can be modified and expanded according to its specifications.

You may also use JSON to offer the scope for data exchange between the client and the webserver. Integrated APIs for the creation of HTTP, TCP, and DNS servers, etc., are also supported.

Even though Node.js is a major web service building framework, it was not developed for basic website development. Express.js is a quick, minimal framework that sits on top of Node.js and helps you in creating efficient web applications and websites for single and multipage applications. You will know how to set up the framework and build a functional website with these technologies once you learn Express.js.

Along the way, you can also learn how you can improve your overall knowledge of how to work with Node.js efficiently. All of this will help you in developing a simple application with templating engines; build more versatile, modular code with conditional statements; work with POST requests and more.

A lot of splendid statements about amazing functionality and functional solutions offered by Express.js can be heard from a lot of places. However, how it performs is also one of the most critical things. The most suitable measure to evaluate performance within the framework is the number of requests processed per second. The measure is valid for several web apps because the millisecond delay time is less relevant than absolute throughput performance.

Several tests on scalable systems and on particular terms can be found. Such studies typically predict a contrast in flexible environments of various frameworks such as Restify and Koa.

The findings of a specific test, however, should not be taken as a standard for the performance of the framework as a whole. Depending on the form of the test procedure, the number of requests made within a second varies. Even, the base metrics are displayed.

Per the official analysis of Express.js, multiple techniques in both the code and the environment may optimize its performance. This included gzip compression, load balancer, reverse proxy, app execution in a cluster, etc. The system was compared with other methods in 2015, 2016, and 2017, according to DZone. It has always shown good results on Ubuntu VM in 2017, such as 2875 requests per second. However, its competitors Restify, Absolute, and Koa2 showed higher outcomes.

The advantages of emerging technology continue to be enjoyed by business owners and various entrepreneurs. Tons of thousands of smartphone apps roll out every day to fight for their place in the market. Growing demand for software apps triggers the growth of developers’ forge.

A mobile app developer is not confined to using just a few tools to finish the work. On the contrary, the issue of preference is generated by an excess of instruments to build applications for portable devices.

The key feature of this article is the Node.js framework for a cross-platform JS runtime environment. Honestly, to expose the Node functionality is an outfit of useful functions, plugins, and packages. This is where Express.js comes into the picture.

Sometimes, listening to the viewpoint of developers who have the experience of dealing with it is the smartest method to understand the meaning of the framework. In certain situations, from various reports made by developers, epithets such as “flexible, minimal API-building NodeJS tool”, “well-structured and easy-to-learn system” and “it saves time on request parsing and establishing node environment” can be read.

The most appealing characteristics of Express.JS are that it is easy to understand and its freedom of action. It is generally advised that the framework be used as a tool for a time-constrained project.

Read More:   Introduction Of Ransomware - How You Can Protect Your System?
Rate this post