Being halfway through 2017, we think that it’s a good moment to analyze the predominant mobile app development trends. We’ve noticed that our clients are getting more and more interested in developing innovative mobile apps.

We also want to keep an eye on the latest technology trends shaping mobile landscape, trending programming languages, or crucial security updates. Now, we want to share these trends with you in this article.

Without further ado, let’s get to the 9 trends we found crucial for mobile app development in 2017:

With an undeniable success of games like Pokemon Go or AR filters in messaging apps like Snapchat and Instagram, we’ve already seen how popular augmented reality applications may be.

And the trend is about to grow, as more businesses will try to implement AR to showcase their products. One of the examples of how to bring AR and retail together, is the joint effort of Apple and IKEA to create an application that will help to showcase IKEA’s furniture in buyers house. It will use Apple’s ARKit, and the new products will first be available through the app.

If the app proves to be successful, other manufacturers from various industries will follow.

2. AI will change the tech

The advancements in AI change the way we interact with mobile apps. Virtual assistants like Siri, Cortana and Google Assistant can now help us with gathering information, organize our schedules or optimize our productivity.

The developments in Natural Language Processing and machine learning make virtual assistants more contextually aware, making their responses better and more accurate. Machine learning is, according to Venture Scanning, the most funded category amongst AI-based ventures, reaching $2B. At the same time, big companies like Facebook, Microsoft, Google and Amazon invest in solutions based on machine learning to create better conversational interfaces.

Last year we’ve seen mobile apps like Prisma, that used neural networks and AI to create what other thought a simple filter could do. The effect was stunning and we can expect other app developers to experiment with similar solutions.

In 2017 mobile app security is one of the most important trends.

The general growth of the industry, billions of users, 3rd party SDKs and the vast number of user data being stored by the companies made a security a top concern for mobile app developers.

Location-based apps are going to expand, as location-based services (LBS) change how users interact with businesses.

And with easily available APIs and Google map technology, it’s now easier than ever for mobile app developers to create location-based solutions for the users.

Kotlin has become an alternative to Java for Android developers, similar to Swift and Objective-C on iOS. Its growing popularity and successful use in commercial projects make 2017 the year when Kotlin will finally take off on a bigger scale.

The reason for that is the ease of use.

Learning Kotlin for Java developers is pretty easy, as well as for C# developers, as both languages share some similarities. Developers can also use Kotlin and Java in one project, as they work together smoothly. They can also use it with Android Studio, a tool from IntelliJ.

It also helps to avoid some Java pitfalls, like null references, which increases products’ quality.

That’s why Kotlin is being named “Java on steroids” and we will see more Android apps using it.

6. iOS: Swift will continue to grow

Swift’s growing popularity will not stop in 2017, as it is considered a powerful and easy-to-learn mobile programming language.

With its concise syntax and clear documentation, Swift in considered smoother in comparison to Objective-C.

And just like Kotlin and Java, Swift and Objective-C can be used in the same projects, with full access to Objective-C API.

Swift will maybe not take over Objective-C this year, but we will find more and more iOS application based on it.

Loading speed is still a crucial factor for mobile users. 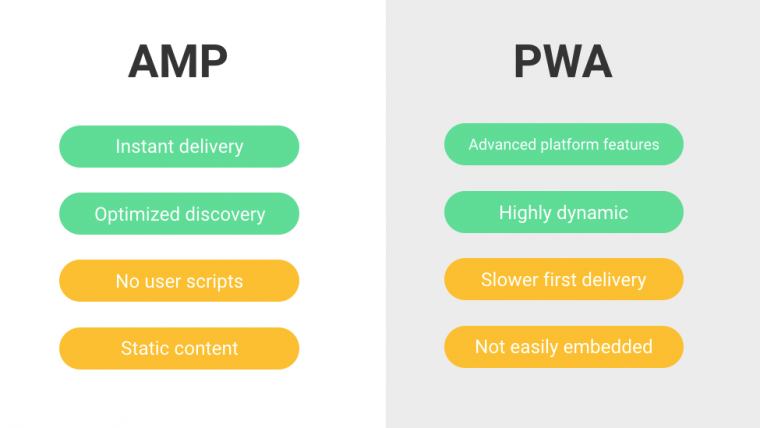 In order to improve it, Google has introduced Accelerated Mobile Pages. It is an open source project aiming to improve mobile browsing experience. You can easily recognize AMP-based website searching Google on mobile, as they are marked as such.

Web developers, businesses and publishers will need to consider this solution, as it not only improves the user experience on mobile, but is also an SEO factor (AMP websites rank higher in Google).

At the same time, it is cheaper to develop and maintain the AMP than building a native or hybrid mobile application.
AMP and PWA comparison. Source: Smashing Magazine

Progressive Web Apps (PWA) have been dubbed the next generation of mobile web apps. They are free from constraints of mobile websites like slow speed and the need of constant Internet connection.

PWAs bring a native-like feel with features including offline and full screen modes, a homescreen launcher, an access to the camera and push notifications. Plus, they are faster and consume less data than mobile websites.

Progressive Web Apps don’t require downloading and installation, which is the answer to mobile fragmentation and multiple operating systems.

Some companies, like the Financial Times, have already dropped native apps in favor of PWAs, and other ones like Twitter introduced a lighter, progressive alternative for their own native apps (e.g., Twitter Lite). With the growing list of Progressive Web Apps of popular applications like Flipboard, AliExpress or Telegram, we can expect a shift towards PWAs.

Considering the high number of mobile applications in the app stores, Google realized how daunting it is for the users to download and update new apps every now and then, for different purposes.

That’s why the company introduced its Android Instant Apps, previewed during the Google I/O developer conference this year.

With Android Instant Apps users can download only the most needed parts of the application, accessing the rest of the content instantly through the URL, saving space on the device. Android Instant Apps are being developed simultaneously with Google’s Progressive Web Apps.

According to Google, there have been 50 instant apps developed already, and developers can easily transform their native apps into instant ones, without the need to build a separate application.