Debates exist on whether using network sockets and HTTP protocols to communicate are the best options, as they could easily become a bottleneck with some architecture. However, when well designed, microservices bring some non-negligible advantages:

Containers Got It Right

A first step when designing a microservices architecture is to separate each component, or role, of the whole architecture into small, independent pieces.

Containers, such as Docker, can help, in a number of ways:

Despite the strengths of Docker containers, their runtime execution architecture has a security weakness. Docker containers execution relies on runc (formerly libcontainer, and originally LXC), which is a set of binding and optimizations around Linux kernel isolation technologies (cgroup, namespaces…). They provide a great isolation for many applications, however, they are a risky choice in the case of multi-tenants environments. All containers on the same host share the same Linux kernel with that host, which first enlarges the possible attack surface, but also limits the running applications to one common unique kernel.

In other words, Docker containers as we know them are great microservices packaging solutions, however, they lack critical runtime features for multi-tenants environments.

If we strictly focus on the isolation part, two approaches are feasible to ensure a better security of a multitenants container-based infrastructure.

The problem here — and especially with the second option — is when it comes to scaling. Today’s clusters are composed of identical VMs scaled up and down on demand. However, this approach may lead to the loss of one of microservices’ strengths: the flexible scaling. In the current clustering approach, each machine has to meet the requirements of the most “expensive” containers (storage, memory, CPU). Doing this, providing a new machine for a container requiring more RAM will lead to a waste of storage, a machine for a database container to a waste of computing resources, and so on. Otherwise, you may have to create VMs according to the container size (DB instance for DB containers, cache instance for cache container, etc.), and make sure your scheduler place the proper containers on the proper VM. Then you face the question: ”Why do I need this scheduler?”

Furthermore, if we look at the customization bit, then we realize there is no truly flexible solution to define or tweak a specific kernel version for your containers. This may be a real drawback in some applications (like Network Functions Virtualization), where new and mature technologies constantly mix with each other.

To address this dilemma, we have built Hypernetes as a distribution of Kubernetes, the containers’ scheduler of Google Container Service. Kubernetes is an open source orchestration system for Docker containers. It handles scheduling onto nodes in a compute cluster and actively manages workloads to ensure that their state matches the user’s declared intentions. Using the concepts of “labels” and “pods”, it groups the containers which make up an application into logical units for easy management and discovery.

We believe Kubernetes as being to future of containers scheduling and orchestration, by its ease of use, reliability, power and contributors community.

Hypernetes is based on Hyper, the hypervisor-based Docker engine. Hyper allows running Docker images with any hypervisor (KVM, Xen, Vbox, ESX). Hyper is different from the minimalist Linux distributions like CoreOS by the fact that Hyper runs on the physical box and loads the Docker images from the metal into VM instances created on-demand, in which no guest OS is present. Instead of virtualizing a complete operating system, Hyper boots a minimalist kernel in the VM to host the Docker images. In short, your Pod is a virtual machine.

With this approach, Hyper is able to bring some encouraging merits:

Hyper (Hyperd) runs directly on all your bare-metal machines to provision HyperVM (with Docker images) in a millisecond. Within the VM, the “Hyperstart” init process is launched on top of the Hyper Kernel (or any compatible Linux kernel) to run Docker images as Pod. The Kubelet agent runs on each bare-metal host and manages HyperVM with Hyperd’s APIs. The formed cluster of “Kubelets” is managed with the help of a “Kubernetes Master” server. 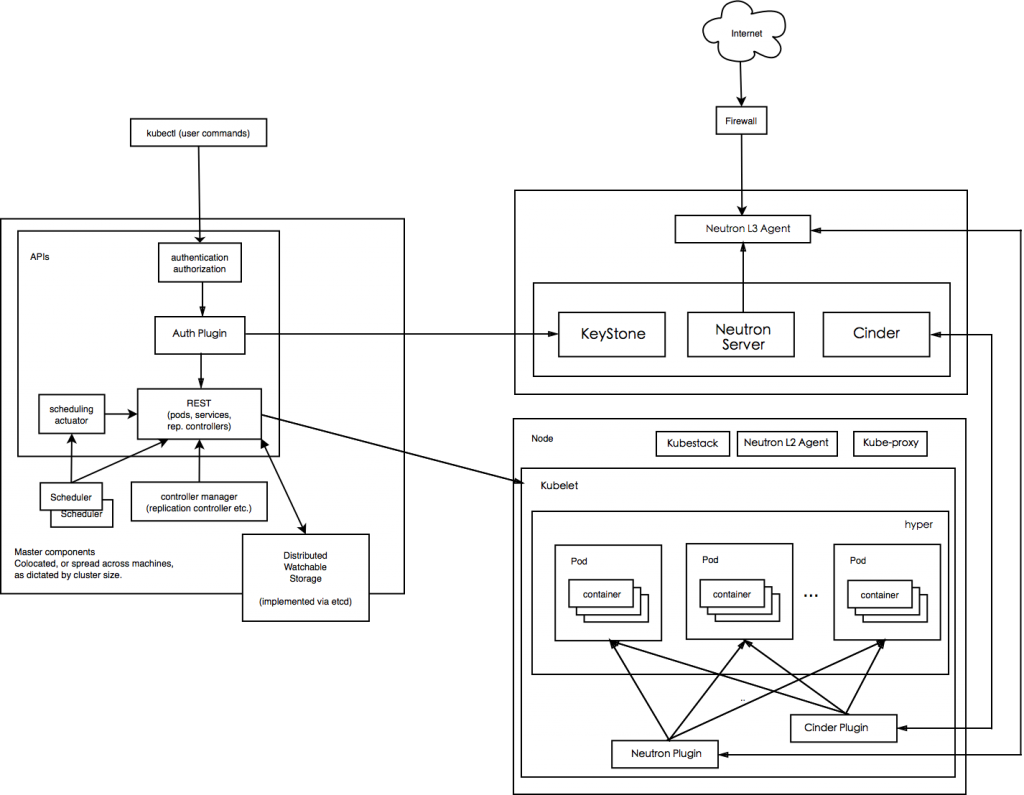 We just see that Hypernetes “Pods” are virtual machines (VMs). VMs are not constructed the same was as Linux containers, and management of external peripherals (networking, storage, and so on) cannot be done in the same way it is done with containers.

The big strength of relying on virtualization and OpenStack components is their modularity, reliability, and interoperability.

Virtualization technologies have been used for years to build reliable systems, and success in large-scale deployments shows us its magnitude. In addition, by speaking the OpenStack language, Hypernetes enable the combination of already existing and deployed OpenStack additions (i.e. networking plugins) with containers. In other words: don’t throw away the great parts of your current architecture!

As we saw previously, microservices take all their sense when deployed in the Cloud, thanks to very fast networking infrastructures. Docker images are a perfect format for microservices packaging. But for the multitenants public cloud, you are required to make a choice between going for a low customization PaaS-like approach, or a resources overhead clusterization approach.

Hypernetes came from the idea that another method was possible. Hypernetes let you manage your virtual machines in the way containers would be, with comparable provisioning performances and resources optimization, by provisioning a tailor made VM-on-demand, according to the current needs.

Hyper and Hypernetes are open-sources, and we warmly welcome contributions on our GitHub, as well as discussions on our Slack Community.