Pet technology recently got its own segment on Mach, a new technology site created by NBC News. Mach describes how “pet tech” lets you watch your pets remotely, and even play with them or dispense treats. (“You watch Fido run over and devour it, wagging his tail…”)

It’s hard to underestimate just how popular pet technology has become. In 2015 the Guardian reported on “one of hundreds of products recently introduced into the quickly growing market of connected devices for pets.” Yes, hundreds. By 2025 we’ll be spending $2.6 billion on pet technologies, The newspaper reported.

Mach interviewed Yaroslav Azhnyuk, CEO and co-founder of Petcube, which manufactures a high-definition “pet camera” that also lets you talk to your pet, and dispense treats.

Azhnyuk says there’s a two-fold appeal in this new breed of technology. First, it can give pet owners new insights into their pets — and of course, “We can be close to them even when we’re not in the same physical space.”

A slick two-minute video shows some model pets being awed by the treat-dispensing box. They leap gracefully to chomp down remotely-tossed pellets. There’s even a cat that seems to be chasing the red dot from a remotely-controlled laser pointer. The video ends with the words “Reimagining Pet Care.”

So pet technology is clearly an idea whose time has come. In 2013 Petzi raised $130,210 on IndieGogo for “PetziTreatCam,” a remote camera that lets pet owners see their pets, talk with them, and even remotely give them a treat.

And Petzi is not the only ones finding an audience of crowd funders anxious for its product. PlayDate sells a remote-controlled “smart ball” with a camera inside, controlled by a mobile app. It raised $824,267 last year on IndieGogo — almost six times their original goal. And in 2015 pet owners kicked in another $137,924 to fund the PetBot monitor. (“Using PetBot’s ‘petificial intelligence’ and bark notification, you can train your pet to send you selfies…”) PetBot even implements facial recognition technology for your pet — as well as “bark recognition,” which sends a notification on the assumption that a barking dog means something is happening. 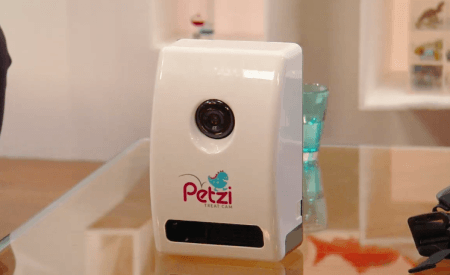 The feature also works for cats — though I personally don’t need a notification every time my cat meows.

“People will go to great lengths to stay in touch with and keep an eye on and take care of their pets,” PetBot’s co-founder told the Guardian, “and that driving force is more than enough to propel this industry to huge heights.”

So there’s now dozens of examples of technology for pets — and some high expectations. The folks at Tractive even promise a “remote control for your pet” — which involves training your dog to respond to vibrations from a small device clipped to its collar.

Mach also interviewed the CEO of a company called Whistle, Ben Jacobs, who believes he’s built a product that can “give pet parents that much-needed peace of mind.” It tracks your pet’s location and activity using GPS signals — “down the street or 3,000 miles away,” its site brags. It’ll notify you if your pet strays from its designated safe regions, and can show you everywhere your pet went over the last 24 hours. It even includes an “activity monitor” feature and offers nationwide coverage — with a $9.95-a-month subscription.

And now at least one company is taking a big data approach to pet health monitoring: FitBark. The site promises “Deep, actionable insights for better health decisions,” arguing that a healthier dog could mean fewer vet bills and even increase the life expectancy of your pet. The site also shares insights gleaned from the pet-generated data so far:

Sometimes the data confirms expectations, but other data seems to challenge conventional wisdom. For example, the company recently argued that it doesn’t make sense to feed dogs the exact same amount of food each day. “The range of a dog’s daily activity is extremely wide. This means that we need to start adjusting food consumption to activity and target weight. For example, to maintain his weight, your dog is allowed to eat a higher amount of food when you go on a 3-hour hike together vs. when he’s home alone all day.” 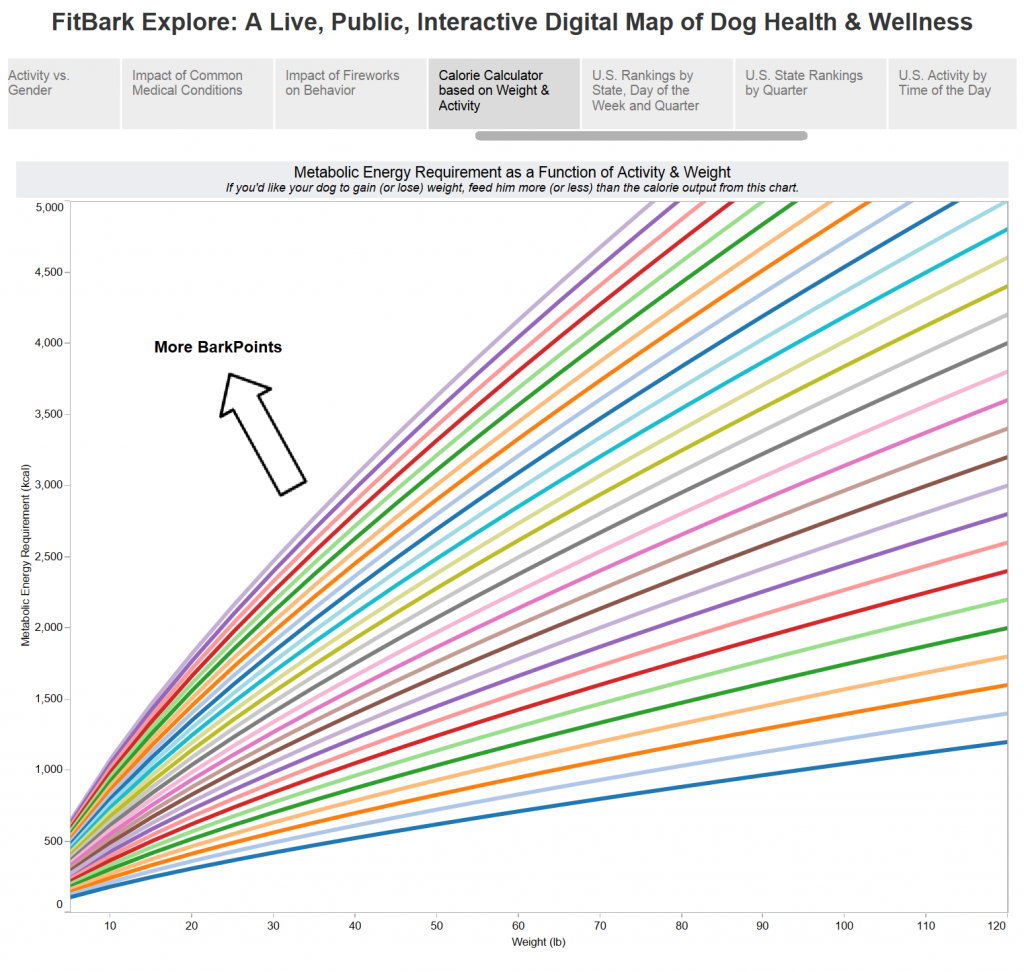 The site also proudly displays testimonials from academic researchers. Dr. Cathy Wyse, a research fellow at the University of Glasgow, calls FitBark “part of an exciting new force in science, the generation of big datasets that can take us closer to the truth about the relationship between health and lifestyle,” noting that daily pet monitoring can detect diseases and other changes at a very early stage.

Of all the pet technology, FitBark seems to be the most serious about collecting the data and making it actionable. “Nobody has ever described dog health, sleep, wellness and behavior at scale,” argues the website. The company has customers in over 100 countries who own more than 200 breeds.

The CEO of FitBark believes the metrics collected on our pets could one day be mined like any other big data set. “We’re creating, from our existing users, a baseline for all the breeds, for all the various dog sizes, for all the various age ranges,” Betsy Fore tells the Guardian newspaper, “and all of this information was never available before.”

The Guardian describes it as the advent of “the internet of pets.”

“While clinical studies of pets and animals have historically been limited in size, scale and budget, fitness trackers and other devices are providing new and extensive bodies of data for veterinarians and animal health professionals to draw from,” the article’s author concluded.

But don’t forget what owning a pet is all about: spending time with our furry companions. NBC’s Mach also interviewed Dr. Marc Bekoff, a professor emeritus of ecology and evolutionary biology at the University of Colorado, Boulder, and also the author of several books on animal ethics. His opinion about technology?

“It shouldn’t be a substitute for the human’s central role in the life of a dog.”

InApps is a wholly owned subsidiary of Insight Partners, an investor in the following companies mentioned in this article: Census.