How many Software Developers are in the World?

According to the 20th edition of the State of the Developer Nation report, at the start of 2021, there were 24.3 million active software developers worldwide, including 13 million software professionals. This represents a 20 percent increase over mid-2020.

According to Slashdata, there were 18.9 million software developers in the world in 2019. This number is expected to rise to 45 million by 2030. These are imposing figures that demonstrate that the demand for IT professionals is rising – and will continue to grow – worldwide. 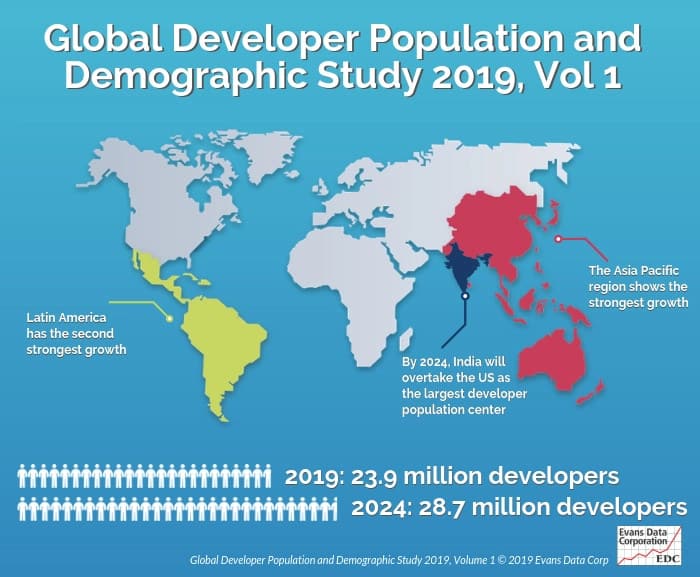 How many developers in the world

How Many Software Developers are there in the US?

The number of software developers in the US has reached 4,3 million, putting the country in first place. 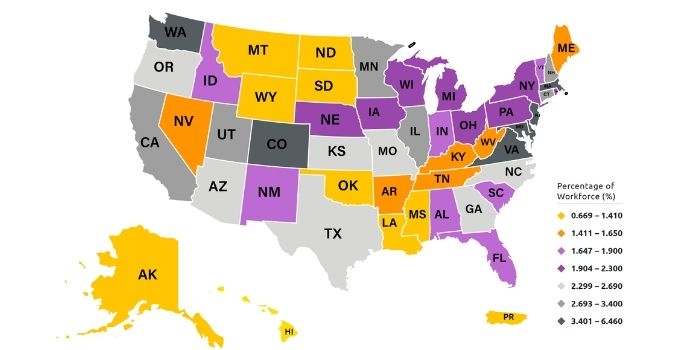 How many software developers in the US? (Source: Daxx)

In addition to software developers, the 4,3 million estimated in 2021 includes technical writers, electrical and hardware engineers, CAD programmers, actuaries, statisticians, economists, mathematicians, and anyone who writes or reads code on a daily basis. If we only consider the “traditional” definition of a software developer, we’re only looking at about 3,4 million people.

Read More:   Reimagining Incident Response as the Domain of the Developer – InApps Technology 2022

Top 10 US states with the highest number of software developers

California leads the way in terms of raw numbers, with 628 thousand developers. Texas comes in second, and New York comes in third, with 325 thousand and 218 thousand people. 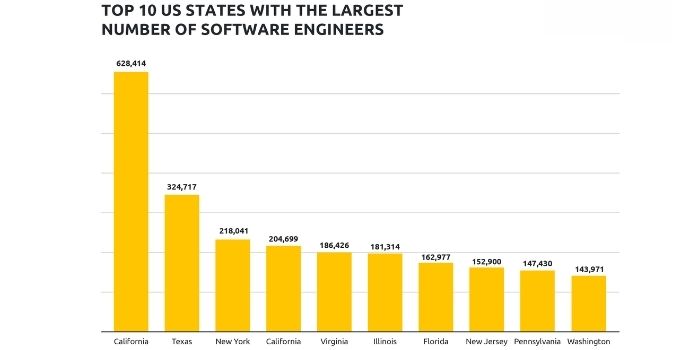 How Many Software Developers are there in Europe?

The European software market is regarded as one of the world’s largest outsourcing centers, attracting customers from all over the world. 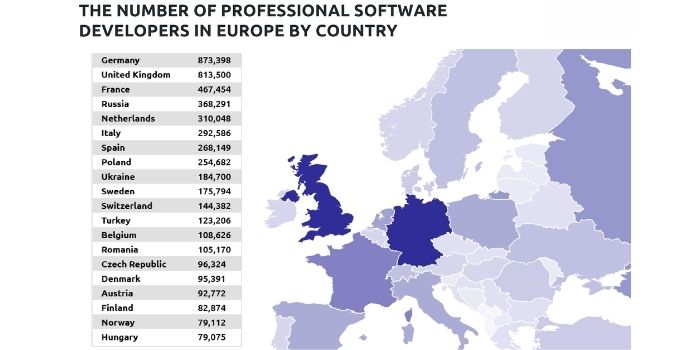 What’s the highest number in the world?

Learn more: How much do software engineers make by country? – Update 2022

The Number of Software Developers by Technology

We also found some rough estimates online that you might find helpful:

The number of Java developers varies a lot. In 2003, there were between 1.5 and 3 million Java developers; by 2007, when Java became open source, this figure had risen to 6 million.

According to Evans Data Corporation’s Global Developer Population and Demographics Survey, the Java developer population was 9 million in 2009, making Java one of the most popular programming languages worldwide.

According to SlashData, 7,1 million Java developers worldwide in September 2018.

According to Developer Economics, the number of software developers using JavaScript in Q3 2020 was 12.4 million. This means that JS was used by 53% of all developers worldwide at some point.

“JavaScript is the most commonly used programming language on the planet,” according to the 2016 Stack Overflow Developer Survey. Back-end developers, in particular, are more likely to use it than any other language.” Meanwhile, according to the most recent data from SlashData, there were 10,7 million JavaScript software developers worldwide in 2018.

EvansData says approximately 5,9 million Android developers and 2,8 million iOS developers worldwide. According to the report, there will be 14 million mobile app developers by 2020.

Nowadays, the figure has risen slightly to 5,4 million.

According to SlashData, there were 7 million Python developers in 2018. Python is gradually catching up to Java in terms of popularity. 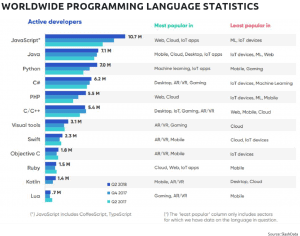 Most in demand programming languages

The number of Software Developers in Big Tech companies

Have you ever considered: how many software engineers does google have? How many people work at Facebook?

In recent years, Vietnam has been the destination for IT outsourcing thanks to the competitive labor costs compared to other countries, a large pool of IT talents with foreign language proficiency, and open policies regarding foreign companies of the government. During COVID-19, Vietnam is also one of the Safest Countries.

If you want to hire world-class software developers at an affordable price, look no further than InApps Technology.

InApps Technology is more than a software development company. It is a dream of Vietnamese developers. We focus on the niche market related to mobility solutions and high productivity dedicated team to expand the business model for our clients.

InApps developers are at the epicenter of the IT industry in Vietnam. Our skilled and experienced teams can work on any software development project that you might need, as proven by their high customer retention rate. Feel free to explore the website to learn more about our offerings and technology solutions.

Clutch recognizes us as:

Need a trusted partner to provide the best-talented developers?