At Shell, they use Edge as an umbrella term to cover the embedding of agile and lean principles and practices across the whole company, which grew out of an IT initiative.

Project Edge began in 2010 because “We needed the IT solution to change as fast as possible,” a faster, cheaper way to deliver projects and to remain competitive.

Just how did they accomplish this agile at scale?

Edge is what Shell calls its “cutting edge” way of blending an agile project delivery approach with scrum for an agile software development lifecycle. It also uses DevOps to enable continuous delivery, while retaining some aspects of traditional Waterfall project management.

The objective is, by 2018, “to get Edge across all our businesses for world-class project delivery,” Dubus said.

The first step in implementing this widespread transition from completely Waterfall to the “sprint, learn, succeed” mindset of Edge was to decide where and where not to implement it.

Edge is deemed most beneficial to projects that require one or more of the following:

Dubus added that “We like to use it when the business requirements aren’t clear.” 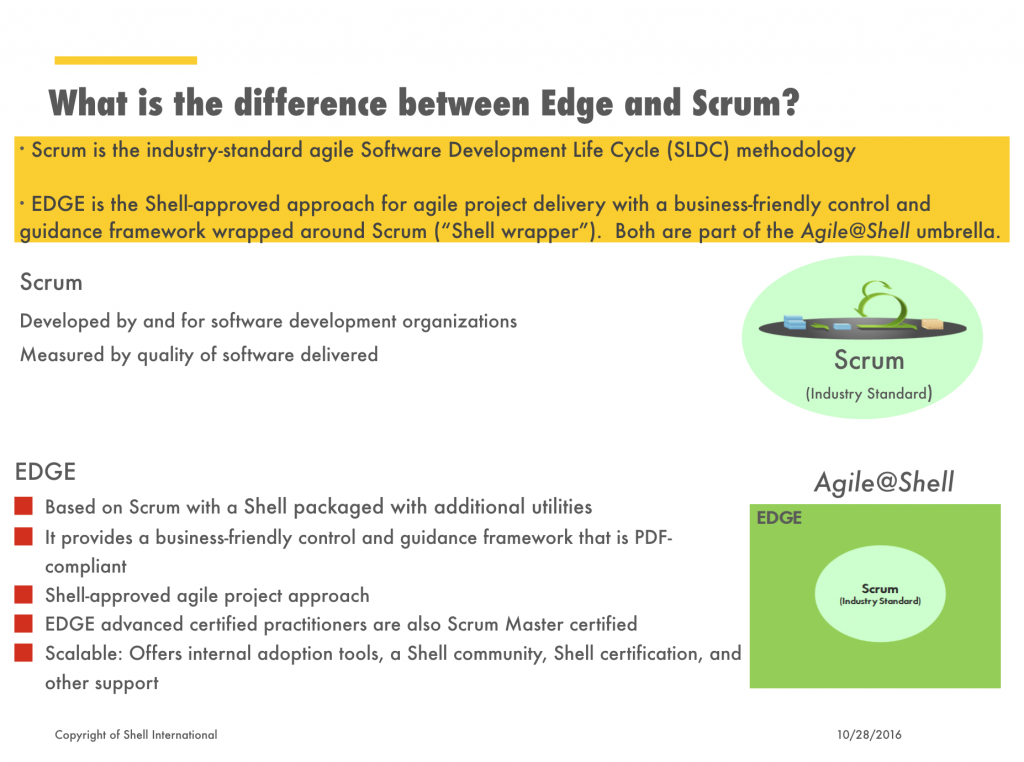 Edge was deemed ineffective in the following situations:

Below you can see the ladder diagram explaining more in depth the Edge Project Delivery Process. 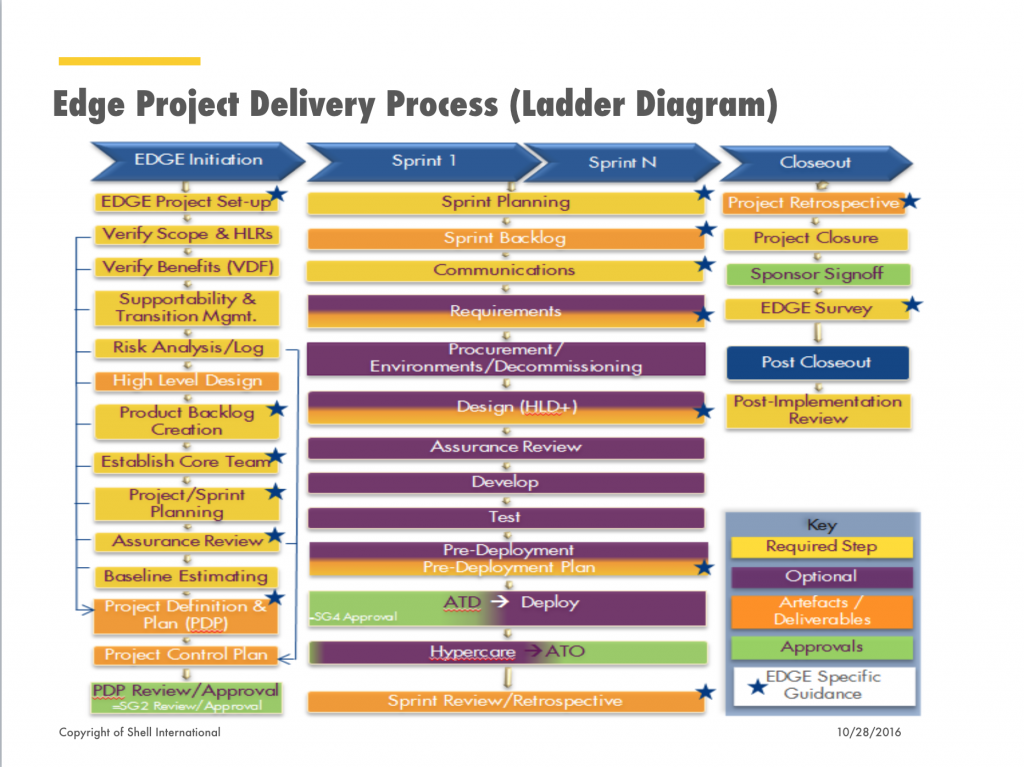 This bi-model agile-Waterfall methodology approach again involved distinct tracts and criteria to decide when to apply which model:

Below you can see a visualization of how these delivery methodologies are implemented, noting how DevOps and agile involve short iterations while Waterfall follows an inherently longer, slower process. 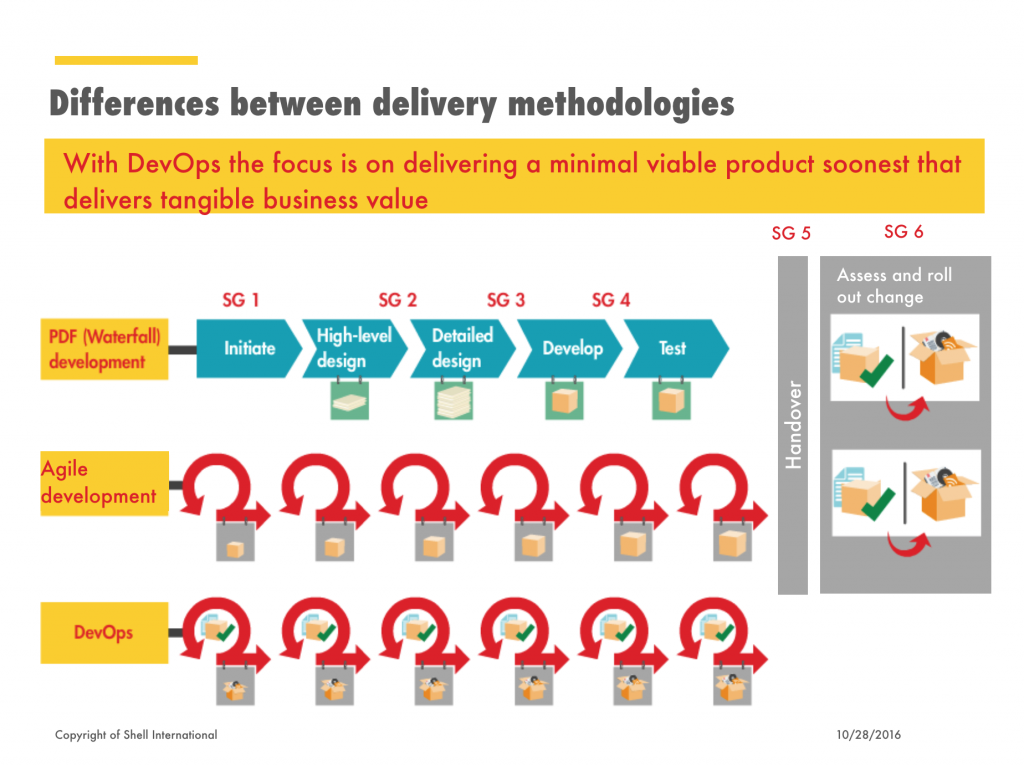 “DevOps means you do something and you put things in production,” Dubus said, explaining how, with Edge, they are somewhere between agile and DevOps because it varies when they put things into production.

He said that development teams are doing a lot of agile in DevOps already and expressed excitement as they work toward automating everything, integrating autonomously and updating the source code.

For Shell, the value proposition of the rapid iteration of DevOps is to “deliver and enable business capabilities that generate value faster whilst maintaining operational and security.”

Shell project managers are working on the tools to make sure they are secure so they can go fast. After uncovering a need for clear handrails of what is DevOps and what is not, this past year, Shell provided a DevOps 101 training for all Shell IT employees to learn more about this kind of change and release management. 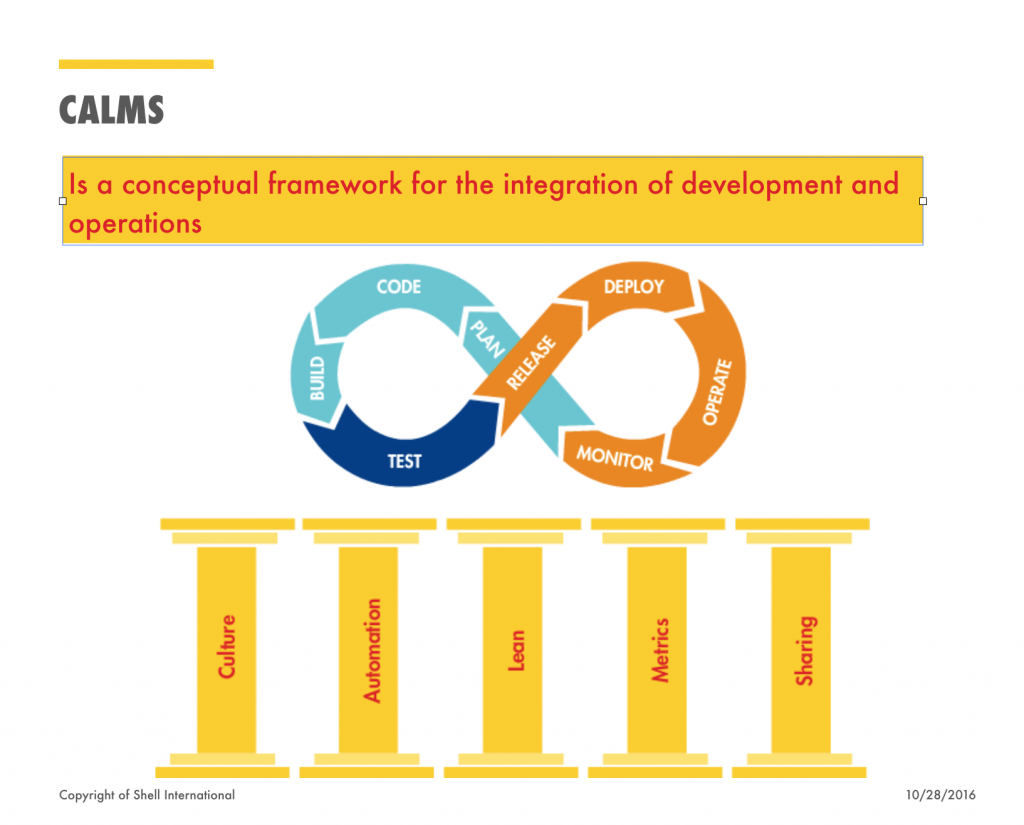 Above you see the conceptual framework driving this company-wide initiative toward cracking down silos to create one team.

Dubus said that before enacting the Edge initiative, the company was heavily relying on consultants — about 50 percent of the staff on IT projects — and now only five percent of IT is consultants.

But How Do You Measure Cultural Change?

Of course, being the fifth wealthiest company in the world, measuring its success is a priority. Beyond the impressive reduction in consultants we mentioned earlier, since its implementation, the project has found:

Of course, another important way to measure success in the oil and gas industry is whether or not it complied. For agile and Scrum in the heavily regulated worlds, certainly “compliant” is another definition of “done.”

Measuring cultural changes is always a challenge, but it’s a particular hurdle for such a large multinational. At the end of October, Shell released the following learnings from the Phase I Pilot:

These realizations led to the following recommendations:

As you can see, Shell has a long way and a couple years to go. But this is one of the largest scale DevOps and agile initiative taken on by a major multinational company. Even as a much larger enterprise, It shares the same challenges as startups — resistance to cultural change and measuring for success. Only when these hurdles are overcome can it then be determined if DevOps is a success or just a passing fad.