Read more about Hygieia, Capital One’s Entry Into the Neflix and Etsy Land of Open Source – InApps Technology at Wikipedia

You can find content about Hygieia, Capital One’s Entry Into the Neflix and Etsy Land of Open Source – InApps Technology from the Wikipedia website

Did Capital One just put your DevOps environment to shame? When DevOps is often defined as that thing for smallish companies in the tech space, I laugh at them. But at the same time it’s often hard to find case studies where the DevOps framework is being used in a larger capacity within traditional non-tech business. And it is even harder to find examples in regulated industries. But actually financial services has been all over the DevOps movement. From Acorns mobile-first DevOps environment, to Wells Fargo’s shared services model, and now Capital One’s Hygieia.

At the O’Reilly Open Source Conference (OSCON), Capital One showcased Hygieia, a unified dashboard representing the entire software delivery pipeline. Not to mention this being another example of large non-tech companies making big contributions to OSS, the dashboard shows how capable and ready large enterprises are for DevOps.

Hygieia also addresses head on one of the big challenges organizations are going to face when they adopt the DevOps framework: You become a slave to the current release. Your ability to sustain and extend the delivery chain is limited. Poor oversight can become a problem, and only then is it claimed that “DevOps does not work.”

Read More:   Be The Next Uber/Grab With InApps’ Car Booking Development Services

There are a few things that stand out to me with Hygieia:

A lot of what they talk about is standard Agile principles, but in the context of a DevOps mindset. This is not wrong. And, in fact, this represents the tackling of a major challenge large enterprises face. They want to be modern, but they have an existing environment that is not. Instead of trying to transform everything all at once, they tackled what they could, which was to increase visibility, communication and advancement of their pipeline. But in doing so they acknowledge the drive to improve, and get to introduce elements of things like continuous delivery down the road much easier. In any established environments, baby steps are necessary, and taking what is already working and improving on that is a good way to go.

They put a lot of effort into integration with tools like JIRA and Git. As completed integrations, they currently list: VersionOne, JIRA, Subversion, GitHub, Hudson/Jenkins, Sonar, HP Fortify, Cucumber/Selenium and IBM UrbanCode Deploy. This could essentially be viewed as the Capital One stack. Sonar and Selenium are great examples of putting emphasis on quality, which so many companies neglect. I would expect more code and component management, and testing, to be some of the integrations Capital One adds to the Hygieia platform.

The dashboard seems to be segmented by application. This makes it more scalable across a large organization, but also allows the teams for each application autonomy and gives granular detail about the application’s behavior. My question: How much sharing is done across teams? Silos are a necessary evil in large organizations. And in a regulated industry, firewalls are built for some communications. New and better things are not shared unless it is deliberate. And this is often done with a shared services organization, like Wells Fargo has done, who in addition to Hygieia would offer all the processes and tools as a service library to all application teams. 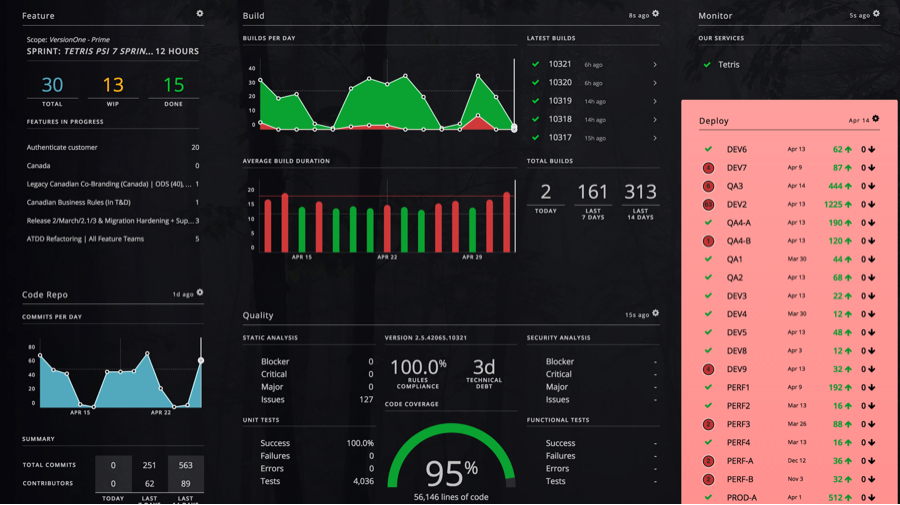 Some might think that this is not a new visualization, and for sure is not DevOps due to the lack of emphasis on the language around continuous integration and continuous delivery. However, Hygieia is more about process. Reducing the amount of time between customer feedback and updated functionality is the goal, a point made by Dr. Tapabrata Pal in Capital One’s launch article. And because the heart of DevOps really is simply more frequent and faster releases at a higher quality, they have done what it takes to make that happen in their organization. DevOps is a journey. With Hygieia they now have another way to travel the path.

Hygieia is one window into DevOps. Not only does it help the team with operation of their environment, it becomes easier to show what is going on for those peers who are not involved on a daily basis.

Will Capital One join Netflix and Etsy on the DevOps pedestal? How many other enterprises labeled “slow moving” are secretly building awesome tools that just get the job done? By finding real problems, and addressing them, Capital One has demonstrated that anyone writing code can embrace the DevOps mentality. They took the extra credit assignment and made it open source. They are committed to keep it going. It’s impressive. Capital One has shown better product management and a launch, that for me, outshines what I have seen from similar efforts by most software vendors.