Can we perform a massive MapReduce on every moment of the year gone by? New Year’s Day always confronts us with the ultimate big data question: what just happened over the last 12 months? And is it predictive of any trends for the year ahead?

The most important step in celebrating New Year’s Eve is always first to raise a glass of kindness yet for any memories that we may have forgotten. But if every moment is a container filled with memories, here’s an attempt to tease out some meaning from that great Hadoop cluster that was 2015.

Monday Docker announced that the original founder of the Debian project, Ian Murdock, had died at the age of 42, “a tragic loss for his family, for the Docker community, and the broader open source world.” As a 20-year-old undergraduate, he’d created the Debian Project in 1993, then watched it rise in popularity over the next two decades. Debian.org described it as “the world’s Universal Operating System” in a memorial, which concluded that “Ian’s dream has lived on, the Debian community remains incredibly active, with thousands of developers working untold hours to bring the world a reliable and secure operating system.” Docker added that Ian “helped pioneer the notion of a truly open project and community, embracing open design and open contribution; in fact, the formative document of the open source movement itself (the Open Source Definition) was originally a Debian position statement.” And even far up in the heavens, Ian’s operating system is still running, having been adopted by the International Space Station in 2013. 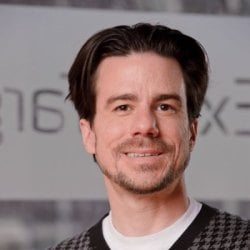 But 2015 may be remembered as the year when even Microsoft finally seemed to warm to the world of open source developers. In December, they announced that Microsoft would now offer Debian GNU/Linux across their Azure cloud computing platform, along with a new “Linux on Azure” certification program, which they developed with the Linux Foundation. They also announced plans to Open Source ChakraCore, which they described as all the key components of the JavaScript engine powering Microsoft Edge. As Microsoft scrambled to finish development on Windows 10, they even treated geeks to a special Windows 10 version of Minecraft, which launched in the Windows Store on July 29.

Read More:   Event-Driven Architecture Is the Wave of the Future – InApps 2022

This may also be remembered as the year when technology started coming even closer to our bodies. “In 2015, we saw a cancer patient receive a 3D printed sternum and rib cage …” reported the technology site 3Ders.org, noting that in 2015 a firefighter had also received “the world’s most extensive face transplant ever thanks to 3D printed guides.” While the year started with Google discontinuing their Google Glass prototypes in January, on December 28th Google filed new FCC documents about an improved version, fueling speculation that they were now still moving forward, targeting new niche markets like health care, manufacturing, and energy. And in April Apple released their first smartwatches — finally offering consumers a chance to strap an iOS-compatible screens to their wrist.

And yet May also saw the arrival of the Android-compatible Pebble Time smartwatch. The Pebble Time had been funded by the largest-ever Kickstarter campaign (with $20.4 million pledged by 78,741 backers). But by February even my friend Evangelo Prodromou was already gushing about the Neptune Pine smartwatch, another Android-wearable device which had already been successfully funded by a Kickstarter campaign back in 2013. And in March one hobbyist even created their own satirical Apple II watch — trying to mimic the form factor of Apple’s original 1977 personal computers with a tiny wrist-worn CRT … and an even smaller drive in the front for floppy disks. 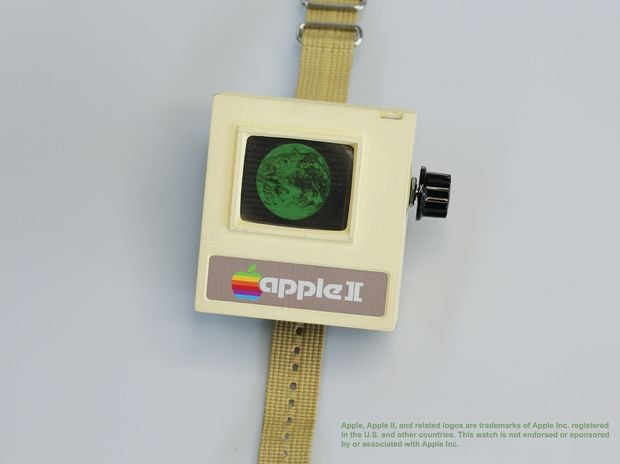 Besides the invasion of our personal space, somewhere in that dataset is a hidden message about the democratization of technology projects. In 2015, geeks also pledged $652,001 for the creation of a new artisanal keyboard and another $5.7 million to fund new episodes of “Mystery Science Theater.” Three of Kickstarter’s most-funded campaigns in 2015 turned out to be video games, and three more were geeky board games — all of them raising more than $3 million before they’d even been created. And the year’s eighth most popular campaign was for the Zano “autonomous, intelligent swarming nano drone,” which ultimately provoked a new Kickstarter first — the commissioning of a journalist to investigate why that project had failed.

Read More:   The Time to Decide on Docker Desktop Has Arrived – InApps 2022

But the masses still managed to get their hands on real drone technology. In August someone in Ohio actually used a drone to deliver a package of drugs into a prison — triggering a fight among all the inmates in the exercise yard. The new technology resulted in 241 “close encounters” between drones and manned aircraft in 2015, according to the FAA, who by September were issuing an early warning “that there will be a million drones under people’s Christmas trees this year.” By December “Consumer Affairs” estimated that the final number of new drone owners would be closer to 400,000, noting that the FAA now has a special drone task force developing new regulations. And last week when the FAA announced drone registrations, more than 45,000 drone owners turned up within just the first two days.

Kickstarter wasn’t the only place who was helping the makers make. In February, the Raspberry Pi foundation released their $35 Raspberry Pi 2, Model B — a programmable system-on-chip with 1 gigabyte of RAM a 900MHz quad-core. And in November, they released the $5 Raspberry Pi Zero, just 65 millimeters wide, with a 1GHz ARM11 core processor. To celebrate, they bundled one of the $5 computers with every single copy of MagPi magazine’s December issue — the official magazine of the Raspberry Pi. 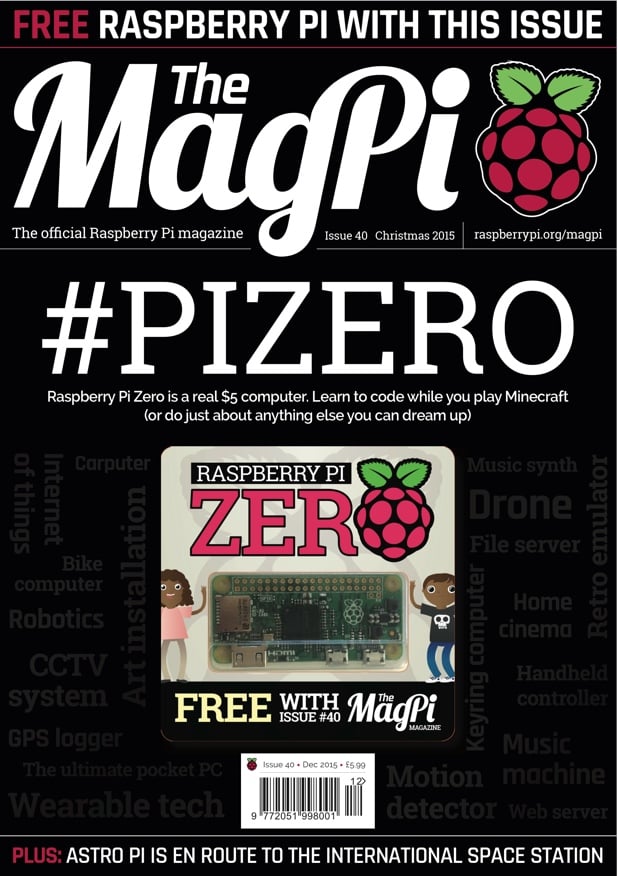 In fact, 2015 may be remembered as a time of grappling with the technologies that we already have. October found NASA putting out a call for a Fortran programmer to continue maintaining their Voyager space probes. Launched in 1977, the probes are still flying across the cosmos, now beaming back data from interstellar space. Utilizing some of NASA’s earliest on-board computers — and 64 kilobytes of memory — the probes have been capturing data for more than 38 years, explains program manager Suzanne Dodd in an interview with “Popular Mechanics.” “It has a looping routine of activities that it does automatically on board and then we augment that with sequences that we send up every three months.”

NASA is confronting the same question we all face: what are we going to do with all of this technology? One nostalgic geek has even installed a roadside pay phone in his kitchen.) Archive.org has announced that they’re now collecting AOL floppy disks from the 1990s. And on Christmas Day, after 15 years of waiting, Perl 6 was finally released.

In 2015, we also said goodbye to some geeky childhood heroes — like the man who invented the Batmobile, and science officer Spock from the starship Enterprise. But 83-year-old actor Leonard Nimoy had lived long enough to appear with a new generation of Star Trek actors as the franchise continued nearly 50 years after its original debut. Within weeks of Nimoy’s death, the Bank of Canada had to urge “Star Trek” fans to stop “Spocking” their five-dollar bills.

But the hidden trend here may be the way that science and technology icons are now creeping into the cultural dialogue. Sony spent $30 million to create a big-budget movie about the life of Steve Jobs. Taking computer animation to new levels, Adam Sandler actually released a movie that starred Pac-Man. Even Pixar’s computer-animated “Inside Out” depicted the brain as a massive data operation center, with the plot revolving around a critical node failure. In “Ex Machina,” one of the actors from the Harry Potter series grappled with the magic of a mysterious female robot named Ava, and in another big-budget blockbuster, the Avengers confronted a super-intelligent A.I. named Ultron. But my favorite technology story of 2015 seemed to somehow tie together everything that was good about the year. 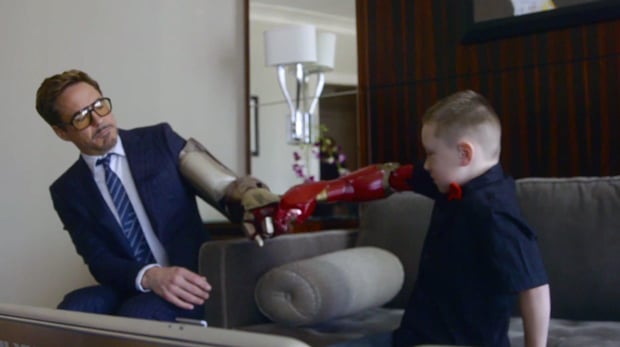 In March, a 6-year-old boy in Florida received a visit in his hospital from Iron Man — or at least, from Robert Downey Jr., the actor who’s played billionaire inventor Tony Stark in at least five different blockbuster movies. The actor was delivering a real bionic arm to the 6-year-old boy — a piece of technology generated on a 3D printer for just $350 by a Florida volunteer foundation. “When he gets too big for it, new parts can be printed on the cheap,” noted a reporter at Today.com, “only $20 for a new hand and around $40 to $50 for a new forearm.”

Maybe we will know the right thing to do with all of our technology, after all …

Featured Image: “As the days pass me by,” by Joe Diaz licensed under CC BY-SA 2.0.